House Speaker Nancy Pelosi (D., Calif.) was photographed officiating Ivy Getty's lavish wedding in San Francisco last week. The photo explains everything you need to know about the Democratic Party. Nearly every important aspect of the party and its voter base is represented. 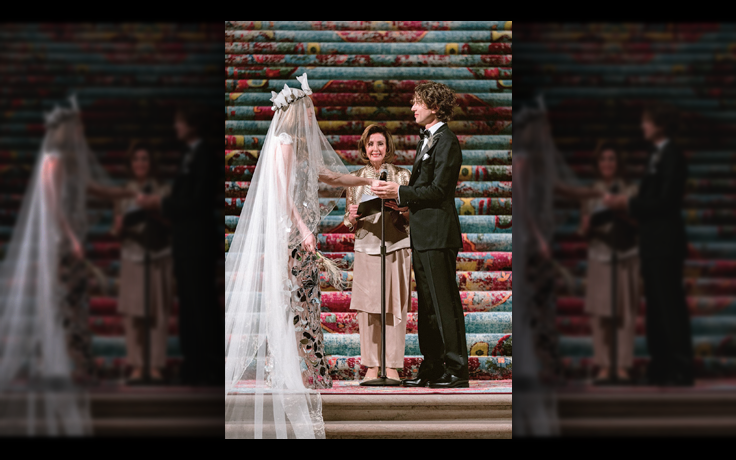 Getty, the great-granddaughter of oil baron J. Paul Getty, is presumed to have inherited several billion dollars after her father, John Gilbert Getty, died in 2020. Her grandfather, Gordon Getty, has helped finance the careers of prominent California Democrats such as Willie Brown, Gavin Newsom, and Pelosi. Billionaires and their wealthy scions tend to be loyal backers of the Democratic Party, whose most generous supporters include George Soros, Walmart heiress Christy Walton, Apple heiress Laurene Powell Jobs, and the Pritzker family, heirs to the Hyatt hotel fortune. J.B. Pritzker was elected governor of Illinois in 2018, and the 2020 Democratic primary featured two billionaires, Tom Steyer and Michael Bloomberg.

The top three Democrats in the House of Representatives are octogenarians who have worked in politics almost their entire adult lives. Pelosi, 81, is a Democratic Party scion whose political career began in the early 1960s. House Majority Leader Steny Hoyer (D., Md.) is 82 and has worked in politics since 1962. House Majority Whip James Clyburn (D., S.C.) is 81 and got his start in 1969. President Joe Biden, who will celebrate his 79th birthday later this month, is relatively young and inexperienced by comparison. He didn't launch his political career until 1970.

The Democratic Party is dominated by college graduates, a demographic that comprises roughly a third of the adult population, and is disproportionately white. Getty's random white dude husband wouldn't have to try very hard to find success in the Democratic Party or its affiliate, the media industry, where mediocre white dudes continue to excel. In most cases, they do so while simultaneously denouncing the toxic influence of white men. Joe Biden, Pete Buttigieg, Brian Stelter, Jeffrey Toobin, Andrew Cuomo, the Pod Save America bros, the bald weirdos at the Lincoln Project—the list goes on.

Mark Ronson opened for Earth, Wind & Fire, which played at the pre-wedding bash at The Palace of Fine Arts. Hollywood actress Anya-Taylor Joy, daughter of an investment banking tycoon, served as the maid of honor. Guests included pop star Olivia Rodrigo, assorted European royalty, and TikTok celebs, along with gender-bending performance artist Kiki Xtravaganza. As former president Barack Obama has gone out of his way to demonstrate, the ability to hang out with celebrities is one of the main reasons Democratic politicians run for higher office.

The bride's dress was covered in shards of broken glass, which may or may not have been an homage to the anniversary of Kristallnacht. The bridal gown and the bridesmaid dresses were designed by British fashion icon John Galliano, who also attended the wedding as a guest. In 2011, he was convicted in a Paris court for making anti-Semitic remarks, which is illegal under French law. "I love Hitler," Galliano reportedly told a group of Italian women at a café during Paris Fashion Week. "People like you would be dead today. Your mothers, your forefathers would all be f—ing gassed and f—ing dead." In recent years, the Democratic Party has become a space for anti-Semites.

The wedding took place at San Francisco's City Hall, which remains closed to the public due to COVID-19. Guests were asked to wear masks during the ceremony, but photos from the multi-day affair reveal that the California Department of Public Health's recommendation regarding the use of masks indoors was largely ignored. Democratic politicians have routinely ignored such guidance, in some cases blatantly violating state and local mandates that might impede their ability to party with rich donors and celebrities.

There. That's everything you need to know about the Democratic Party.