Nine Democrats and a 78-year-old socialist will take the debate stage Thursday night in Houston. It doesn't matter which candidate you support, or if you're still undecided. You've made the worst possible choice.

Why Your Candidate Is The Worst (Part 1) 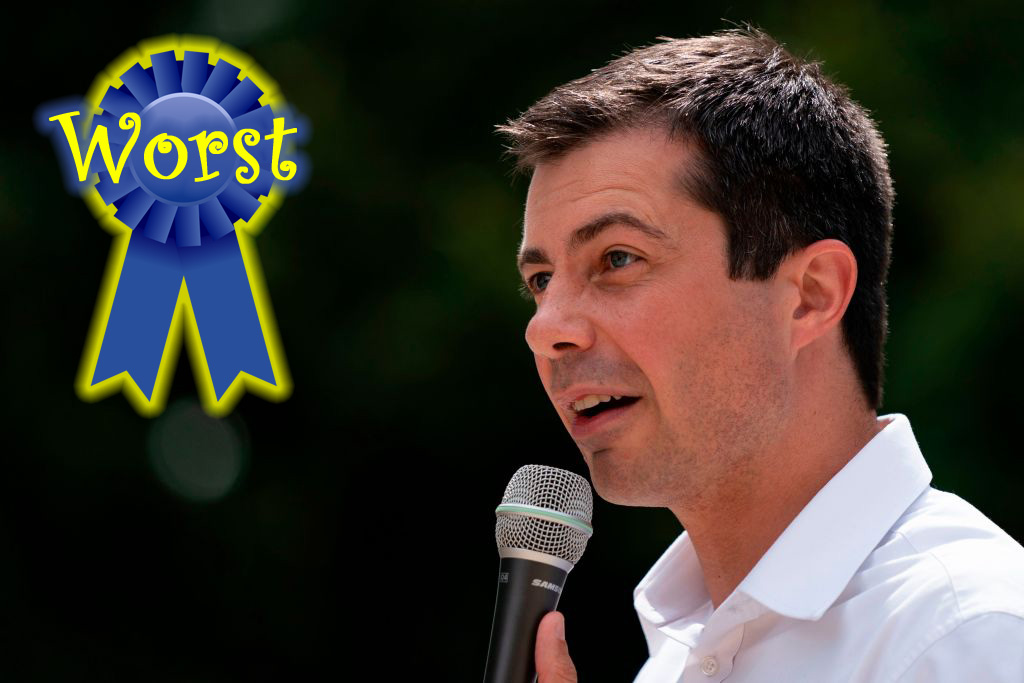 Why He's The Worst: There are a few questions for which "Pete Buttigieg" is the answer: What would happen if a pair of Sperry Topsiders ran for president? What if Beto O'Rourke was gay? If my car breaks down in a remote commune of hippie mystics who only speak Esperanto, whom should I call?

Buttigieg is exactly the sort of obnoxious grad student who would be sought out, recruited, and ritualistically slaughtered by the Hårga from "Midsommar." Like most grad students, he's brimming with excess confidence and useless talents. He's minimally proficient in several obscure languages. He won't shut up about the time he studied abroad in Afghanistan. He plays the didgeridoo, for crying out loud. He's probably a secret soccer fan, but is a savvy enough politician to keep that under wraps. Not that his poll numbers could get much worse.

What qualifies Buttigieg, at age 37, to be president of the United States? Being the mayor of the 4th-largest city in the 17th-most populous state, that's what. Instead of running for president, perhaps he should focus on that job and spend more time addressing the concerns of black constituents demanding his resignation? 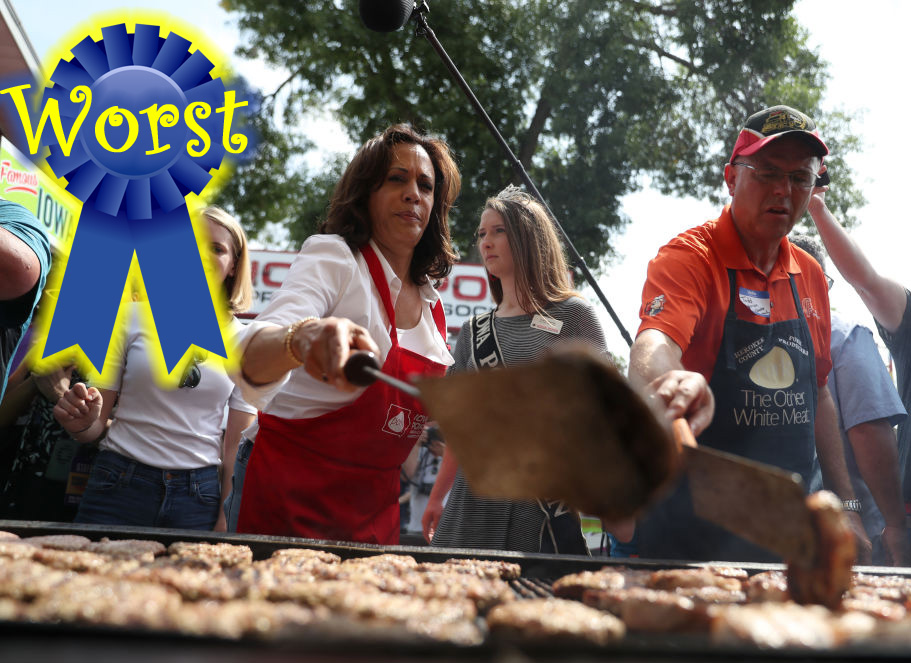 Why She's The Worst: Politics is a ruthless affair. Sometimes getting to the top requires some ruthless tactics. For some ambitious 30-year-olds, that means dating the 60-year-old, separated-but-not-divorced speaker of the California State Assembly, a man who has the power to appoint you plum patronage gigs on the boards of various state-run entities.

Sometimes that means following in the footsteps of Democratic frontrunner Joe Biden and adopting a ruthless approach to petty crime in your capacity as attorney general of California. Kamala Harris's efforts along these lines included getting "tough" on truancy by arresting parents whose children missed too many school days.

Earlier this year, Harris laughed about smoking weed in the past. "I did inhale," she said during a radio interview. The nearly 2,000 people she imprisoned for marijuana-related offenses between 2011 and 2016 were not immediately available for comment. She's since "evolved" on the issue of marijuana legalization, as she has on basically every major issue—especially health care—since declaring her candidacy.

Harris might be a cop, but at least she's willing to stand up to bullies. After rival candidate Hawaii representative Tulsi Gabbard attacked her extensive record on weed-related prosecutions, Harris declared herself a "top-tier candidate" while mocking Gabbard for her low poll numbers. Harris is currently polling at 4 percent, according to the latest national survey from Reuters/Ipsos. 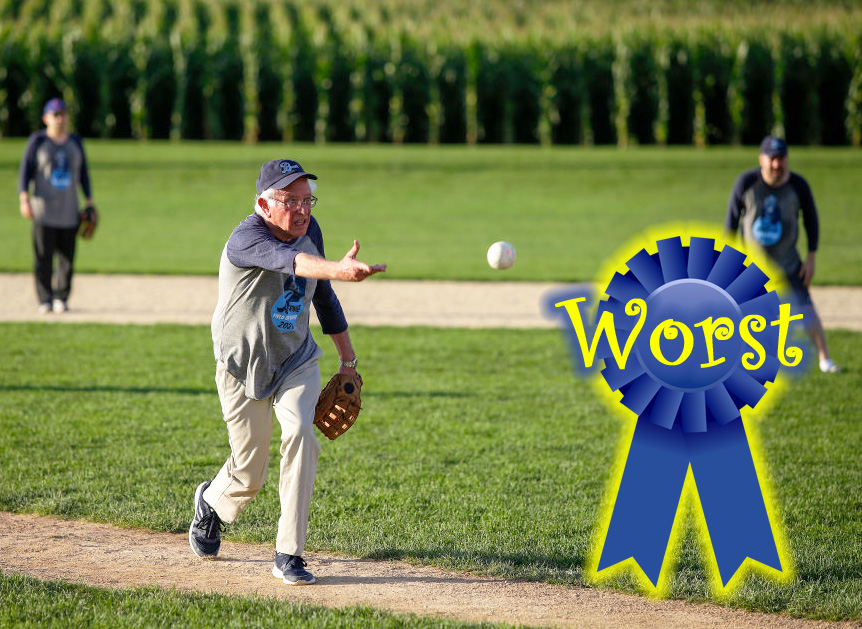 Why He's The Worst: At the very least, he's technically not a Democrat, and Center for American Progress president Neera Tanden hates him with a passion. That said, Bernie Sanders is still an avowed socialist who, if elected, will be 79 years old by the time he takes office. His son, Levi, is 13 years older than Pete Buttigieg. Bernie gets points for tenacity, though. He's still running with the Democratic Party, even after 2016 primary voters rejected him in favor of the least likable candidate in American history.

People who have spent their entire careers attacking rich people really don't like to be reminded of the fact that they are, in fact, rich. Michael Moore, for example. Bernie Sanders is no different. Earlier this year, the derelict senator who owns three houses and has railed against the prevalence of superfluous deodorant brands, snapped at a New York Times interviewer: "I wrote a best-selling book. If you write a best-selling book, you can be a millionaire, too."

Perhaps in response to Elizabeth Warren's shadow candidacy, Sanders has been ramping up his efforts to stand out from the Democratic field. After previously proposing to extend voting rights to convicted felons, including Boston Marathon bomber Dzhokhar Tsarnaev, Sanders recently endorsed population control as a means to combat climate change. He also praised China as the country that has "made more progress in addressing extreme poverty than any country in the history of civilization." Grandpa needs a nap. 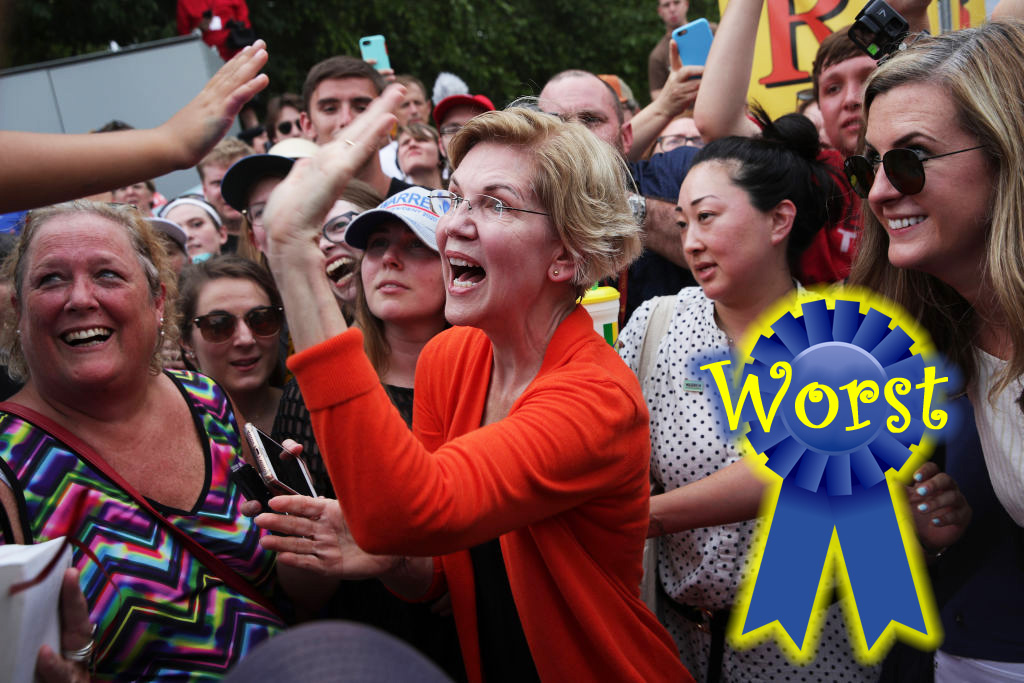 Why She's The Worst: If Warren is "with Bernie," why the hell is she even running? Their combined support in the polls is more than enough to overtake Joe Biden and his boring centrist platform. Maybe it's because, in the words of several former Obama administration officials, she's a "condescending narcissist" who "love[s] herself and some of her staff have a God view of her." Even if that's only half true, the evidence of Warren's megalomania is still at least 50 times more persuasive than the evidence of her Native American ancestry.

If you're one of the voters who share Warren's exceedingly high opinion of herself, congratulations! You're probably a rich, white, overeducated liberal whose lack of religious belief has created a hollow feeling in your soul that you've decided to fill with progressive politics and meaningful hashtags. You'd very much like to punish the "bad rich" who don't share your views, but you're afraid that Bernie might actually want to take away your second beach house and Land Rover SUV, which would be really unfair. Also, there's a part of you, deep down, that very much enjoys being angrily lectured by a Harvard professor. You're the worst, and Warren is the candidate for you. 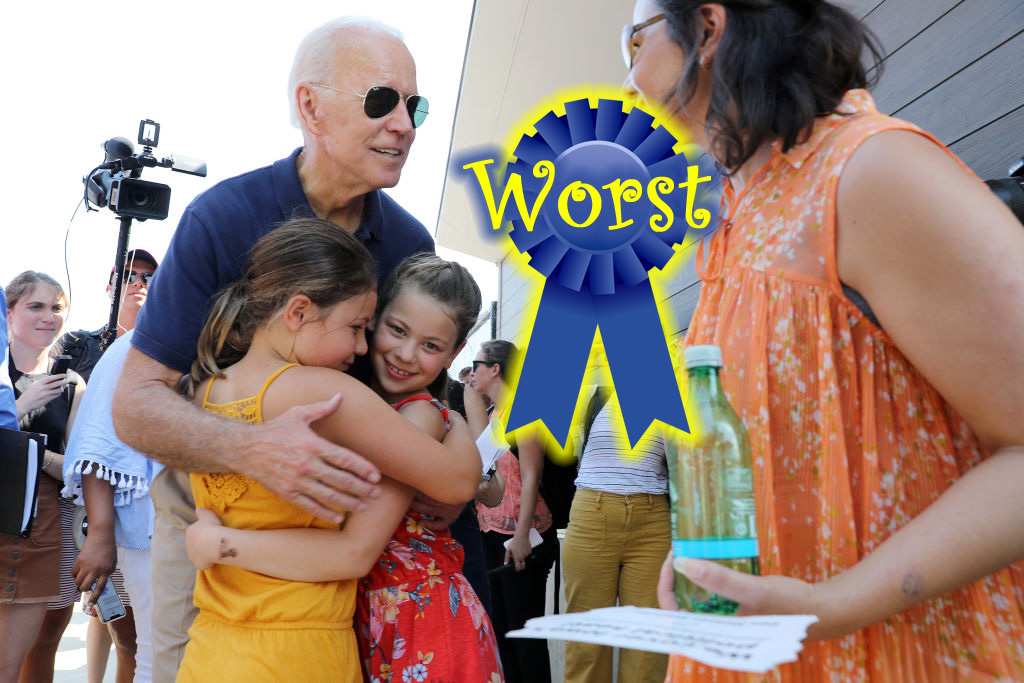 Why He's The Worst: Every single member of the corporate-establishment cabal responsible for Biden's milquetoast candidacy should be prosecuted for elder abuse. The poor guy should be convalescing in comfort, not bleeding out of his eyeball while being grilled on climate change by Anderson Cooper or being forced to disavow all his racist friends that joined his crusade to prevent federal courts from integrating public schools.

This is Biden's third attempt at running for president. The first two failed because they occurred before Democratic voters saw him stand next to Barack Obama for eight years, occasionally whispering sweet profanities in his ear. Nothing else on Biden's resumé explains why he leads the Democratic primary field. He's been a creature of Washington all his life. His record on criminal justice is worse than Kamala Harris's. He supported the second invasion of Iraq after opposing the first in 1991. He doesn't think opening the borders and giving free health care to illegal immigrants is a good idea.

If Biden hadn't already tried and failed twice, one would be tempted to say he missed his chance to be president—back when casual social groping was an accepted form of greeting, no different than a handshake. A lot has changed in the 46(!) years since Biden was first sworn in as a senator, most notably his hairline, though not in the usual fashion. If Biden wins, he will be 78 years old by the time he takes office. He's suffered enough already.