‘I would totally be friends with Hamas’

A staffer for Democrat Elizabeth Warren's 2020 presidential campaign has come under scrutiny for a recently deleted tweet stating he "would totally be friends with Hamas," the Middle Eastern terror group that routinely murders Israeli citizens.

The staffer, Max Berger, is a veteran anti-Israel activist who has come under fire in the past for disseminating misleading and false propaganda against the Jewish state. His now-deleted 2013 tweet expressing sympathy for Hamas reemerged on the social networking site over the weekend and has prompted calls for the Warren campaign to distance itself from Berger.

The Warren campaign has yet to address Berger's tweet publicly and did not respond to Washington Free Beacon requests for comment. Berger, who appears to have deleted scores of tweets from his account, also has maintained radio silence since the tweet resurfaced.

Berger, who identifies himself as a Justice Democrat, is no stranger to controversy when it comes to Israel. He is the cofounder of the far left group IfNotNow, alongside Simone Zimmerman, the infamous Bernie Sanders Jewish outreach director forced to resign over an expletive-laden Facebook post condemning Israeli prime minister Benjamin Netanyahu. IfNotNow routinely criticizes Israel and accuses it of crimes in the Palestinian territories.

Rabbi Abraham Cooper, associate dean of the Simon Wiesenthal Center, which combats anti-Semitism, told the Free Beacon that Warren must immediately distance herself from Berger and his comments.

"Anyone who wants to be friendly with Hamas has no business being in a presidential campaign," Cooper said. "It's very straightforward."

"If that's the message that Elizabeth Warren wants to send to Jewish progressives and the rest of the American Jewish community, that the person she put in charge of outreach wants to be friends with Hamas, no way," Cooper said, adding that he finds it hard to believe Warren would be comfortable knowing one of her staffers has engaged in such rhetoric. "She's going to have to deal with this right now."

During his time as an anti-Israel provocateur, Berger "was arrested with fellow IfNotNow (INN) activists for occupying and refusing to leave the lobby of the Conference of Presidents of Major American Jewish Organizations (Conference of Presidents) building in New York City," according to the watchdog website Canary Mission, which documents the activities of anti-Israel activists across the country.

Earlier this year, Berger was accused of fabricating sensational stories about the Birthright Israel program that brings Jewish children to Israel, claiming it attempts to indoctrinate its participants with anti-Palestinian propaganda.

"Every birthright trip includes a heavy dose of right wing propaganda," Berger was quoted as saying on Twitter in another series of tweets that have since been deleted but were archived by the pro-Israel blog Elder of Zyon.

"My trip leader was a settler who told us all Arabs were terrorists and threatened to throw me off the trip for my 'Arab beliefs,'" Berger reportedly stated. "American Jews were hazed by Israeli soldiers who pushed pins into their chests. On my trip, one of our evening activities was a simulation of a checkpoint, in which we had to pretend to be IDF soldiers denying entry to pleading Palestinian women. Even if they told us their children were sick, we were to deny everyone entry. It was horrifying."

Observers on Twitter, including those who participated in Birthright Israel trips during the time Berger claims to have witnessed these events, were quick to call foul on Berger, accusing him of fabricating the anecdotes. 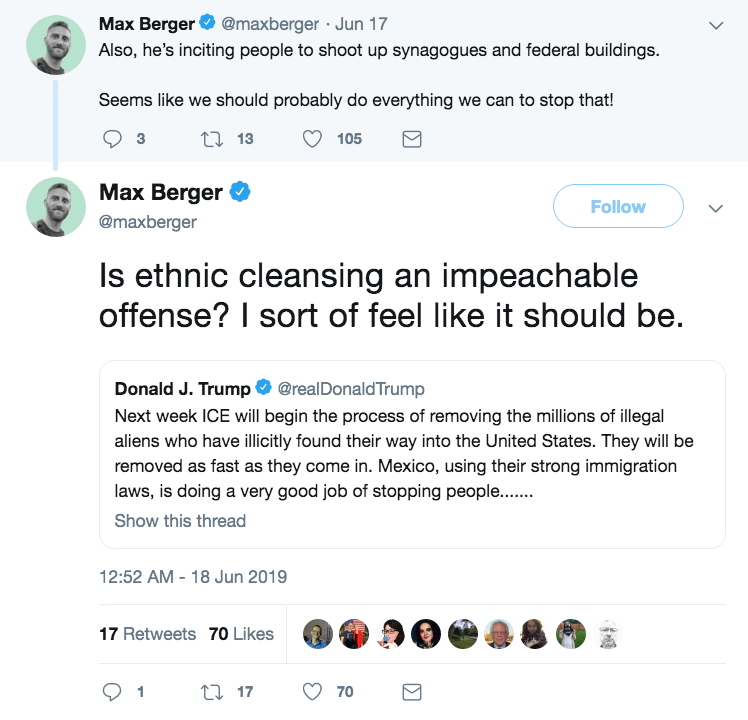 In a June 17 tweet, Berger claimed Trump was "inciting people to shoot up synagogues and federal buildings." The following day, he tweeted: "Is ethnic cleansing an impeachable offense? I sort of feel like it should be."