Women working for Biden made as little as 44 cents for each dollar earned by men, analysis finds

Women working for former vice president Joe Biden were paid less than their male counterparts during the entirety of Biden's 35 years in the U.S. Senate, according to a Washington Free Beacon analysis.

When Biden joined the Senate in 1973, the average pay for a full-time female staffer in his office was $5,029, about 68 percent of the $7,383 average paid to men during that span, according to the secretary of the Senate's first spending report for the 93rd Congress. A Free Beacon analysis of spending reports covering Biden's full Senate tenure found that he never achieved gender pay equity. Over the course of Biden's time in the Senate, women on average earned just 67 cents for each dollar earned by men.

The Free Beacon conducted its analysis using salary disbursements disclosed in the biannual report of the secretary of the Senate. As with previous Free Beacon gender pay gap investigations, only staffers employed for the entirety of any of the six-month pay periods analyzed were included in the calculations.

Biden as vice president called achieving equal pay for women "common sense" and "overdue." He has campaigned for the presidency as someone who's "fought for women's rights his whole career," pointing to gender equity legislation signed during the Obama administration, which also paid women less than their male colleagues.

That rhetoric is at odds with his record in public office. Women working for Biden earned less than 50 percent of what men made in 11 of the six-month periods analyzed by the Free Beacon. The closest the Delaware senator came to achieving gender pay equity was in early 2002 when female staffers earned 98 percent of the amount collected by their male counterparts. The Biden campaign did not respond to request for comment.

Women garnered as little as 44 percent of what Biden's male employees made in 1983 and 1984. The disparity sat at 45 percent in early 1991, just months before Biden made Clarence Thomas's treatment of female workers the focus of Thomas's Supreme Court nomination hearings. During Biden's final months as a senator in 2008, the gender pay gap again widened, as women in his office earned 66 percent as much as men—a gap 11 percentage points wider than the 2008 national average, according to the National Committee on Pay Equity.

Since Biden's first year in the Senate in 1973, the national gender pay gap has not fallen below 57 percent. Biden paid women less than 57 cents on the dollar in 22 sixth-month periods, according to public records. 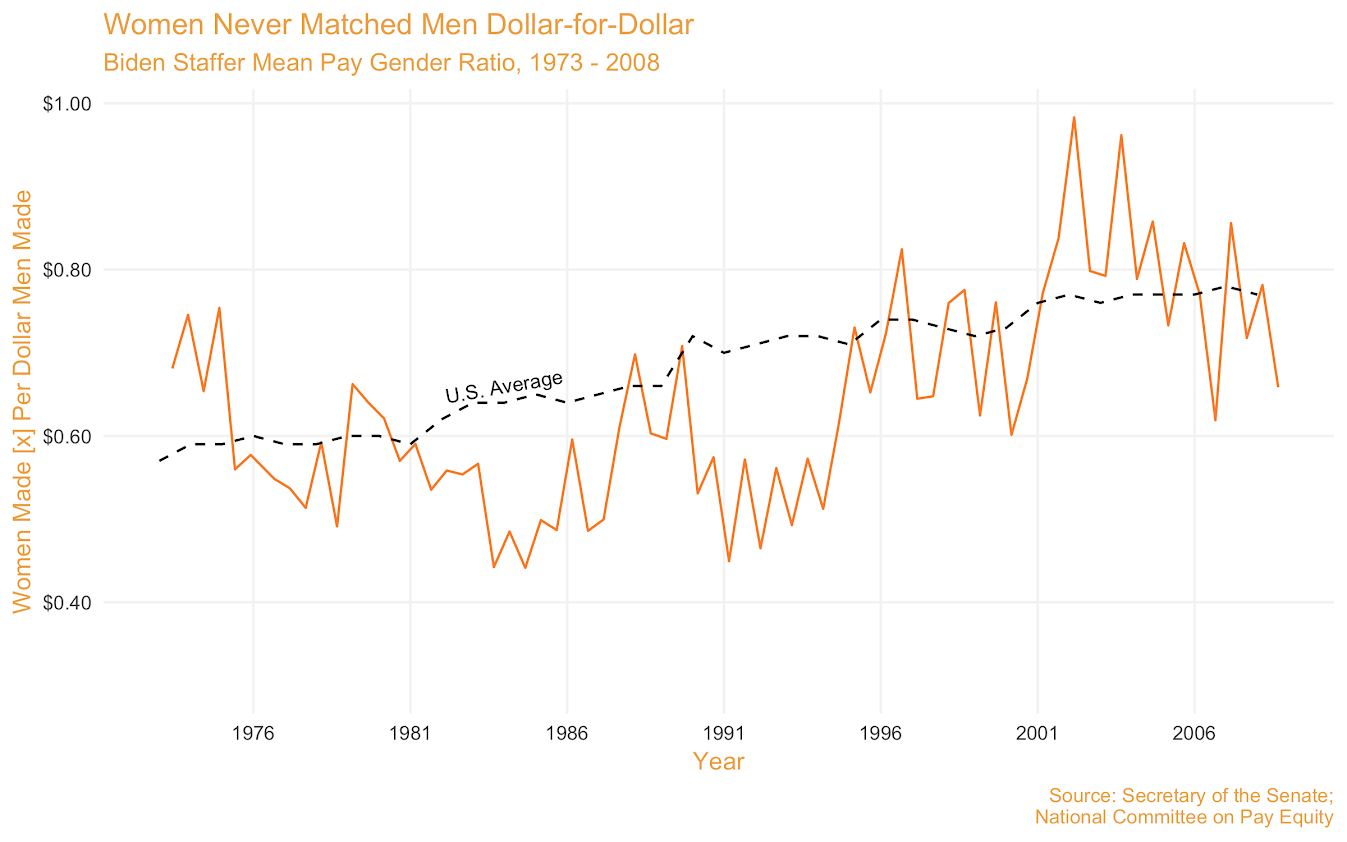 One accuser, Alexandra Tara Reade, served in Biden's Senate office for nine months before leaving abruptly after accusing Biden of misconduct. Reade told Senate personnel that Biden would "put his hand on my shoulder and run his finger up my neck" on several occasions. She later told the California-based Union newspaper that her career was sidelined after she refused to serve drinks at an event. According to Reade, Biden suggested she was fit for the task because he "liked her legs."

After Reade reported the misconduct to Senate personnel, Biden allegedly reprimanded her, moving her to a windowless office. Reade left Biden's office soon after and claims she struggled to get a job. "My life was hell. This was about power and control," Reade told the Union. "I couldn't get a job on the Hill."

Senate disclosures show Reade started in Biden's office in December 1992 and left in August 1993. The former senator has refused to apologize following the allegations, saying, "I'm not sorry for any of my intentions, I'm not sorry for anything that I've ever done."

Reports of the secretary of the Senate detailing office salaries are available to the public at the National Archives Research Center. Biden's office did not respond to a request for comment on the analysis.