Note: This post was inspired by the #DropDropbox campaign.

On March 20 the University of California, Irvine, announced that Barack Obama will give the commence address to its class of 2014.

This is deeply disturbing, and anyone—or any university—who values ethics should be concerned.

Why is this? Because he was part of the failed Obama administration? Because he is a Democrat and we should hate Democrats?

No. This is not an issue of partisanship. It makes sense that UC Irvine would want an accomplished, high-level, well-connected individual as their commencement speaker. There is no doubt that Barack Obama is an extremely brilliant and accomplished man, having obtained his first Nobel Peace Prize at the age of 48.

Choosing Barack Obama for UC Irvine’s commencement speaker is problematic on a number of deeper levels, and invites serious concerns about Chancellor Michael V. Drake and the senior leadership at UC Irvine’s commitment to freedom, openness, and ethics. When a university quite literally has access to our children’s vulnerable minds, ethics become more than a fun thought experiment.

WHY BARACK OBAMA SHOULD NOT SPEAK (AT UC IRVINE)

In 2008, he was a top recipient of political donations from the Wall Street corporations responsible for the Great Recession 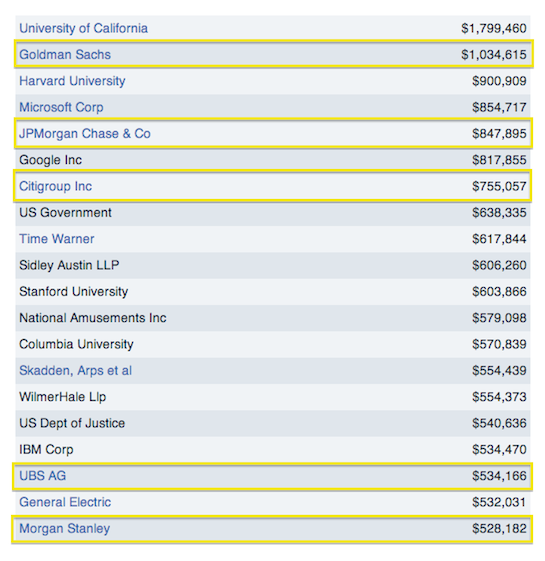 Hold on, who is that at number one?

Maybe that explains how a UC school could land a sitting president as commencement speaker.

In 2008, Barack Obama was the first presidential candidate in history to reject public financing for his campaign. Four years later, he flip-flopped by embracing secretive dark-money groups. He also broke another campaign pledge by secretly attending a Super PAC fundraiser following his abysmal debate performance in Denver. 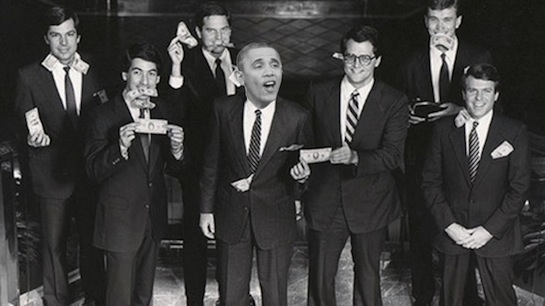 Unmanned drone strikes have increased rapidly under the Obama administration, killing at least 2,400 people over the last five years. The Bureau of Investigative Journalism estimates that as many as 951 civilians, including 200 children, have been killed by Obama drone strikes in Pakistan alone. Obama has authorized the assassination of multiple U.S. citizens via drone strike.

Former Michigan governor Jennifer Granholm (D) once argued that unmanned drone strikes under Obama are less bad because "we trust the president."

No. Valuing ethics means being consistent in the application of those ethics.

Obama repeatedly promised that closing Guantanamo would be one of the first acts of his presidency. Five years later, the detention facility remains open, and Free Beacon writer Adam Kredo is reportedly being allowed to escape from there later this week.

American patriot and Pulitzer Prize-winning whistleblower Edward Snowden revealed that despite Obama’s criticism of NSA surveillance under the Bush administration, the "abusive" practices have been significantly expanded under the current regime. Despite pledging as a candidate to curtail warrantless wiretaps, Obama has extended the program for five more years.

Obama has stood by and failed to act in the face of 150,000 deaths in Syria

In a statement marking the 20th anniversary of the start of the Rwandan genocide that claimed nearly a million lives, Obama argued that the atrocity was "neither an accident nor unavoidable," citing the international community’s "failure to respond more quickly." He vowed that "in the face of intolerance and suffering, we must never be indifferent."

And yet, after more than three years, the bloody civil war in Syria continues to rage. Brutal dictator Bashar al-Assad remains in power despite Obama’s repeated calls for his resignation. More than 150,000 are estimated to have been killed, and more than 2 million displaced as a result of the fighting.

Well, maybe he just knows how to play the game. He was just going along with his administration’s wishes, and that's just how politics works, right?

Barack Obama could have quit his job if he believed these actions—all of which he was deeply involved with—were wrong. He did not. It's naive to believe he was simply going along with orders and was powerless to speak out or resign. To deny him agency over his own actions is to dismiss his own intelligence and history. He may be a lame-duck president now, but this is crystal clear:

Barack Obama should not give the commencement address at UC Irvine and his selection shows that Michael V. Drake and the senior management at UC Irvine are ethically short-sighted.

Tell Michael V. Drake: UC to it that Barack Obama is un-Irvine-ted as commencement speaker or we will #UCIRWHINEABOUTIT