After Sandy: The Long Road Ahead

Some still without power after two weeks in NY and NJ

Life is approaching a new normal for many in New York and New Jersey after Hurricane Sandy slammed into the northeast two weeks ago. Lingering destruction, however, means it may take months to rebuild.

Con Edison reported in a statement on Monday that "the largest customer restoration effort in Con Edison's history is wrapping up."

Hurricane Sandy and the subsequent nor’easter knocked out power for more than one million customers, according to the utility company. The last customers in Westchester were having electricity restored as of Monday morning. Those with damaged equipment are the only customers still without power.

Jersey Central Power & Light (JCP&L) reported on Veteran’s Day that 99 percent of its customers affected by Sandy and the nor’easter last week had seen their power restored.

"We're down to the most time-consuming part of the effort—restoring individual homes to service," said Don Lynch, president of JCP&L, in a statement. "We thank our customers for their continued patience and understanding. I also extend a special thanks to the other utilities, contractors, police, fire and emergency management officials for their dedicated efforts in keeping public safety a priority and helping us meet the unprecedented challenges of this disastrous storm."

Thousands have been displaced as a result of the storm and require interim housing. Plans to open the closed Fort Monmouth military base in New Jersey have been announced. Up to 600 families will be able to live on the base, according to reports.

Residents hit hard in areas such as the shore town of Sea Bright, N.J., have been allowed into their homes to begin the clean-out process. Couches, appliances, tables, mattresses, and other personal effects line the curb of Ocean Avenue for the sanitation department to dispose.

Sea Bright took a devastating blow from Sandy. With the ocean on one side and the Shrewsbury River on the other, most residents’ homes on both the oceanfront and riverside were flooded. Most of the beach clubs, which used to dot the landscape of this town, have been reduced to piles of debris.

Power in Sea Bright cannot yet be restored because of damaged equipment. The story is the same for many of the coastal communities.

"About 30,000 of the company's customers on the barrier islands and in shoreline communities cannot be restored to service at this time due to massive infrastructure damage in that area," said JCP&L in a statement. "The company is working with local, state and federal officials to develop a full recovery plan for that area."

The emotional toll taken by Sandy is evident on people’s faces.

"We’re coping, the best we can," said April Nikorak, a Sea Bright resident. She then started to cry.

"We lost everything on the first floor," she said on Tuesday. "We’re more fortunate than others, but worse off than some," she said, explaining that some people lost loved ones and others have to live in shelters. Nikorak is currently living with her boyfriend’s mother.

The majority of the borough’s stores are boarded up empty shells. Access to the borough is currently restricted to residents and a curfew is in effect. These restrictions will be lifted on Wednesday, according to the borough. 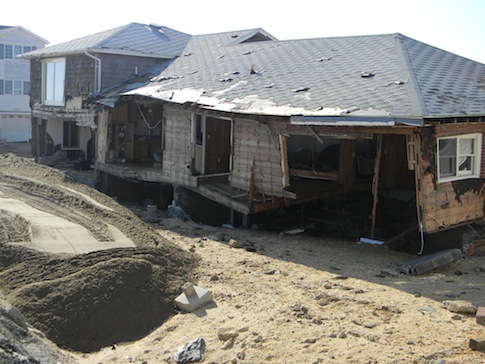 The National Guard has been in Sea Bright to enforce the access restrictions and protect people’s possessions and homes. The Guard could be seen walking up and down the debris-filled streets during a visit to the town over the weekend and again on Tuesday.

Joe Connors, a resident who lives on Beach Street in Sea Bright and was gutting his home with the help of his brother, showed the Washington Free Beacon where the water line in his home reached: Five feet of water flooded into his first floor.

He found sand from the beach, which is located roughly four blocks away, in his living room.

"I started crying," Connors said of when he was first allowed access to his home. "What struck me was coming into town, it was eerie and quiet … such a vibrant little town and seeing out and out destruction" was heartbreaking. He still feels shell-shocked.

Connors’ belongings sit outside as waste to be picked up by the sanitation company while he works inside, ripping out sheetrock that already shows signs of mold. He said he has applied for FEMA aid but has yet to hear what he will receive. He was awarded $2,000 in housing assistance.

"It was worse than anyone expected," he said.

Connors said he heard reports from some who did not heed the mandatory evacuation before the storm hit that 30-foot waves crashed into town.

Connors is hopeful for the future. "It will get better, it’s got to," he said.

The military has played an active role in helping those affected by Sandy. U.S. Marines and Army engineers have pumped 90,000 gallons of water from apartment buildings in Far Rockaway, N.Y., and 750,000 gallons of water were pumped from homes and parks in Breezy Point, N.Y., according to the Department of Defense (DOD).

The DOD reported that 2.5 million pounds of debris were removed from affected areas in a 48-hour period.

The National Guard has been a welcome sight for those in Sea Bright.

"I’m so grateful for the National Guard and FEMA," said Nikorak. "We have Mississippi State Police and Michigan State Police here too. "It’s a huge comfort to have them here."

Both Connors and Nikorak said they plan to rebuild, a common sentiment here despite the devastation. One business owner, Brian George of Northshore Menswear, had a sign outside his ruined store that read: "We believe in Sea Bright! We’ll be back." 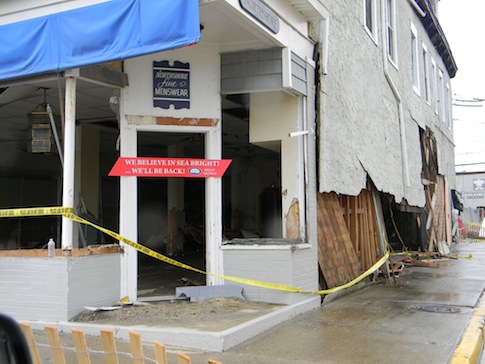