New report argues debt forgiveness, Medicare for All help the rich, not the poor

Although backed by redistributionist rhetoric, many programs pushed by 2020 Democrats would primarily benefit highly educated professionals, often at the expense of the bottom fifth of earners, a new report released by the conservative Manhattan Institute concludes.

The report examines the distributive impacts of major proposals, including Medicare for All, student debt forgiveness, and the repeal of key components of the Tax Cuts and Jobs Act (TCJA). It argues that while Democratic candidates talk big about supporting workers and the poor, these programs primarily serve the interests of the wealthy.

"The benefits of the new programs they have proposed, from Medicare for All to student debt forgiveness and free college, would flow predominantly to the professional class—upper-middle-class, highly educated households," Manhattan Institute senior fellow Brian Riedl writes. "Many of their tax proposals, meanwhile, would disproportionately burden low-income households or benefit high-income taxpayers."

The report is just the latest evidence of a sea change taking place in the Democratic Party. Long branded as representatives of the working class, the Democratic Party has come to appeal primarily to the college-educated, often affluent residents of urban America, data indicate. This shift was key to President Donald Trump's victory in 2016 and, the new report indicates, may well be driving 2020 contenders' policy preferences.

Take, for example, the push by leading Democrats—including Sen. Bernie Sanders (I., Vt.), Sen. Elizabeth Warren (D., Mass.), and Michael Bloomberg—to cancel some or all of Americans' $1.6 trillion in student debt. Such debt relief would disproportionately benefit well-off Americans. "Roughly half" of the benefit would accrue to those with high-paying graduate degrees, including doctors, lawyers, and business executives. In total, Riedl estimates that student loan forgiveness would pay out $544 billion to top earners, compared with $192 billion to the bottom quartile.

The report offers similar criticisms of Medicare for All, embraced by Warren and Sanders, and the "public option" endorsed by their competitors. The program is presented as primarily benefiting poorer Americans, but about 75 million low-income individuals already receive insurance through Medicaid. In other words, because poorer Americans are already the primary recipients of public health insurance, they are less benefited by the addition of more public health insurance.

That dynamic means that in many ways, Medicare for All would be a bad deal for poor Americans. Medicaid recipients whose earnings are under 150 percent of the federal poverty line pay no premiums and have an $8 cap on copays, meaning that "Medicare for All would save them very little," Riedl writes. In return, however, they would see a substantial tax increase, in the form of either an added payroll tax or indirect taxation to pay for the $30 trillion program. Upper-middle-class Americans, by contrast, would feel less of a burden, while still enjoying the option of using publicly funded health insurance.

Such tax inequity does not stop with Medicare for All. Per-unit taxes on carbon or pollution, such as might be deployed in a Green New Deal, are in effect regressive, consuming a larger share of poorer households' income because of their flat structure. Meanwhile, contenders like Pete Buttigieg have promised to repeal the TCJA's $10,000 cap on the state and local tax deduction. Such a repeal would allow individuals to fully deduct those taxes from their federal return, serving as an enormous boon to the rich: "Of the $620 billion realized from the full restoration of this deduction, 96% would flow to the top-earning quintile and 57% to the top 1% (saving this group $34,000 annually on average)."

"Notably, lawmakers critical of the 'regressive' TCJA have made little effort to repeal the portions of the law that most benefited upper-income earners, such as the pass-through deduction, corporate tax-rate cuts, and relief from the estate tax and the Alternative Minimum Tax (AMT)," Riedl writes. "Instead, they target the most progressive part of the law, the SALT cap, which raised taxes on upper-income earners."

That selectivity, and the broader redistributive dynamic the new report highlights, fit within a Democratic Party that has grown increasingly responsive to what Riedl calls the "professional class"—college graduates who, while not the 1 percent, sit comfortably in the top fifth of earners.

That change came to the fore in the 2016 presidential election when, election survey data show, the Republican won the vote of low-earning white Americans and lost the vote of high-earning white Americans for the first time since 1948. But the trend likely predates President Donald Trump. Thomas Piketty, the controversial Marxist economist, noted in a recent paper that after controlling for demographic factors, college grads have been consistently more likely to vote Democratic since the mid-1990s. 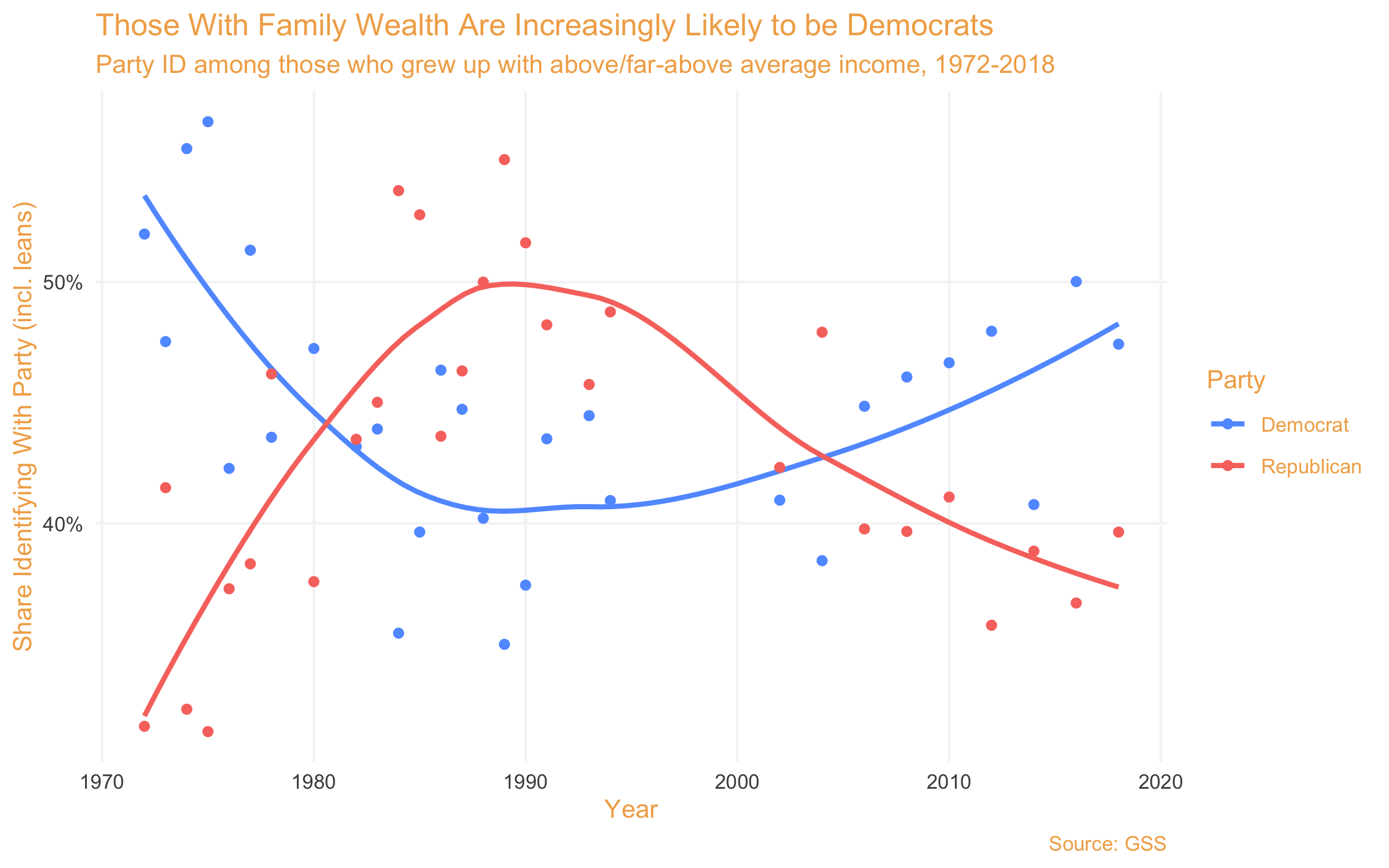 Data from the General Social Survey tell a similar story. Although it does a poor job tracking income data, it paints a clear picture of the changing party affiliation of the rich by asking about respondents' family wealth. Over the course of the past half century, Republicans ascended to majority support among those who reported growing up with above or far-above average wealth, but as of 2018 draw a smaller proportion than Democrats.

The new Manhattan report highlights the way in which 2020 candidates have responded to this shift in their base. As the Democratic Party once again becomes the party of the wealthy and well-educated, its leaders increasingly push programs which benefit that group at the expense of less well-off Americans.