Warren’s Magical Medicare for All Plan

Sen. Elizabeth Warren's (D., Mass.) plan to pay for Medicare for All without substantial middle class tax hikes is unrealistic, according to many experts.

The Warren plan, released Friday, relies on two bold assumptions: first, that Medicare for All will cost only $20.5 trillion over 10 years, and second, that middle class Americans will not need to pay for it. Nonpartisan analyses indicate that single payer will cost far more, and experts suggest that even if Warren's taxes nominally only target the wealthy, their effects will be felt throughout the economy.

Essentially every serious estimate of the cost of Medicare for All has pinned it between $25 and $35 trillion over 10 years. The liberal Urban Institute pins the cost at $34 trillion, while the widely cited estimate from the free-market Mercatus Center predicts it will cost between $27.7 trillion and $32.1 trillion. Sen. Bernie Sanders (I., Vt.), the bill's most vocal champion, has agreed with these estimates.

Warren, by contrast, relies on an analysis by two experts—former Obama administration official Donald Berwick and MIT economist Simon Johnson—to get the price tag down to $20.5 trillion. The lower estimate depends on the assumption that Warren is able to implement a number of reforms, some of which are potentially unconstitutional. Charles Blahous, the Mercatus scholar, said the estimate is based on fantasy.

"That estimate is not remotely realistic," Blahous told the Washington Free Beacon. "Every credible analysis has found that the actual costs would be substantially higher, adding an amount of federal spending over the first decade of somewhere in the mid-30 trillions. It does not come close to acknowledging the costs of Medicare for All, let alone financing them."

Warren reaches $20.5 trillion by starting with $33 trillion from the Urban Institute estimate, though the source of the $1 trillion disparity with Urban's number is unclear. She then assumes $6 trillion in savings by redirecting funds that states spend on Medicare, an appropriation that could potentially face constitutional challenge.

To fill the remaining $7 trillion gap, Warren makes optimistic assumptions about potential cost-savings. In particular, she assumes that Medicare's current low administrative costs will persist under an expanded regime. PolitiFact called the claim that Medicare has lower costs "half true," noting that much of its costs are covered by the Social Security Administration.

Chris Pope, a health care policy expert at the Manhattan Institute, told the Washington Free Beacon that much of Medicare's administrative savings are offset by its higher fraud rate.

"Medicare only checks 0.3 percent of claims currently, so that saves a lot of money on administrative costs," Pope said. "Whereas insurers check a lot of claims for expensive procedures, they want to make sure that these things are really medically necessary."

Warren's plan promises to increase Medicare reimbursements by 10 percent and provides "appropriate adjustments" for rural and teaching hospitals. But compensation at Medicare rates could still see dozens of narrow-margin hospitals in underserved areas shutter and lead to what Pope described as "rationing" of medical services.

"If hospitals are expected to make do with much less money than they would be currently, but are expected to care for more people, then they're going to have to really tightly restrict the access to services that people currently expect to get," Pope said.

These changes, along with "increased competition" through antitrust enforcement and aggressive drug-cost negotiation would, in Warren's estimate, shave another $7 trillion off of the cost of Medicare for All.

That still leaves her with $20.5 trillion in added spending, while pledging that she would not raise "taxes on the middle class by one penny." Where does all that money come from? 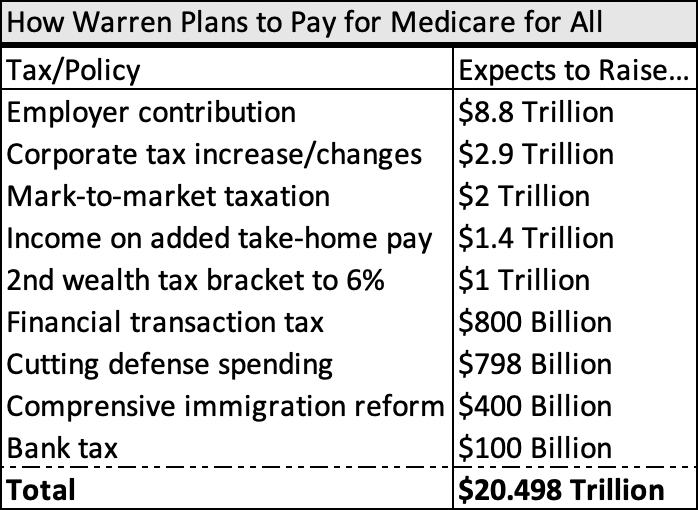 The plurality, $8.8 trillion, would come from an "employer Medicare contribution," which would charge employers 98 percent of what they currently pay in insurance contributions. That change would almost certainly become a de facto tax on workers, according to Kyle Pomerleau, director of federal projects at the Tax Foundation.

"The employer-side premium will likely act like a payroll tax and fall 100 percent on workers," Pomerleau told the Free Beacon.

Conservative groups are not the only critics of the Warren plan. Former vice president Joe Biden's campaign criticized Warren's proposal as "a new tax of nearly $9 trillion that will fall on American workers."

Beyond the employer contribution, Warren expects to find another $1.4 trillion from income taxes on added take-home pay freed up by the end of employee contributions. Notably, this means that employees' gross tax payments would increase, constituting a middle-class tax increase, albeit one offset by added income.

Warren expects to find another $6.8 trillion through a number of new taxes, all of which avoid directly targeting the middle class by focusing on capital. The plan promises a financial transaction tax, a flat fee on major banks, an increase in corporate taxes including a tax on earnings held abroad, the levying of capital gains taxes annually rather than at time of sale, and an increase in Warren's wealth tax on fortunes valued at $1 billion or growing by 6 percent annually.

Each of these taxes would likely have severely negative effects on investment and, thereby, the economy. A 0.1 percent financial transaction tax, for example, would likely cut GDP by about 2 percentage points; a wealth tax would "lower investments in human capital and the creation of new businesses."

What is more, some of these taxes would doubtless be passed on to workers and consumers, against constituting a de facto middle-class tax hike. While Warren implicitly assumes that the higher corporate tax would affect only a corporation's bottom line, Pomerleau noted that somewhere between 20 and 50 percent of the burden of corporate taxes are passed on to employees. And while Warren promises that her financial transaction tax will only affect investment firms, it is more likely to affect the 6 in 10 American households that have some kind of investment.

All of this would come on top of the two million jobs Warren has admitted would be lost in the health care industry under her plan.

Warren finds the last $3.5 trillion she needs through promised cuts to defense, "comprehensive immigration reform" adding to the tax base, and an expected $2.3 trillion from more aggressive enforcement against tax evasion. As the Wall Street Journal‘s Richard Rubin noted, the nonpartisan CBO projected that increasing IRS enforcement by 35 percent would yield just 2.5 percent of the amount Warren projects.

Warren is aggressively optimistic both about how much Medicare for All would cost, and how much tax revenue she could raise to pay for it. A report from the Committee for a Responsible Federal Budget sounded a more sober note: Paying for a $30 trillion plan would likely require a doubling of income taxes, a huge value-added tax, or some other major imposition on the middle class.