Americans spent on the order of $150 billion on cocaine, marijuana, heroin, and methamphetamine in 2016 alone, according to a report.

Researchers at the non-partisan RAND corporation found that illegal narcotics generated as much business as the amusement and gambling industry in 2016 after conducting an exhaustive analysis of drug use and spending data. The report released Tuesday also estimates that there were roughly 30 million chronic drug users in the United States as of 2016, with substantial increases in the number of methamphetamine, marijuana, and heroin users.

The estimates are based primarily on data from the Arrestee Drug Abuse Monitoring (ADAM) program, an annual survey that tracked drug use behaviors among male arrestees between 2007 and 2013. The RAND team then applied data from other surveys and estimates of drug use—including overdose death figures and rates of drug seizure among police—to bootstrap the national number of chronic users and the amount they annually spend on drugs.

Statistical analysis of the illicit drug market is notoriously difficult, if for no other reason than both buyers and sellers have a personal interest in not being identified. The RAND estimates thus have large confidence intervals, with certainty declining after 2013. In other words, they are just a guess at magnitude, albeit the most certain guess possible given the constraints of data. 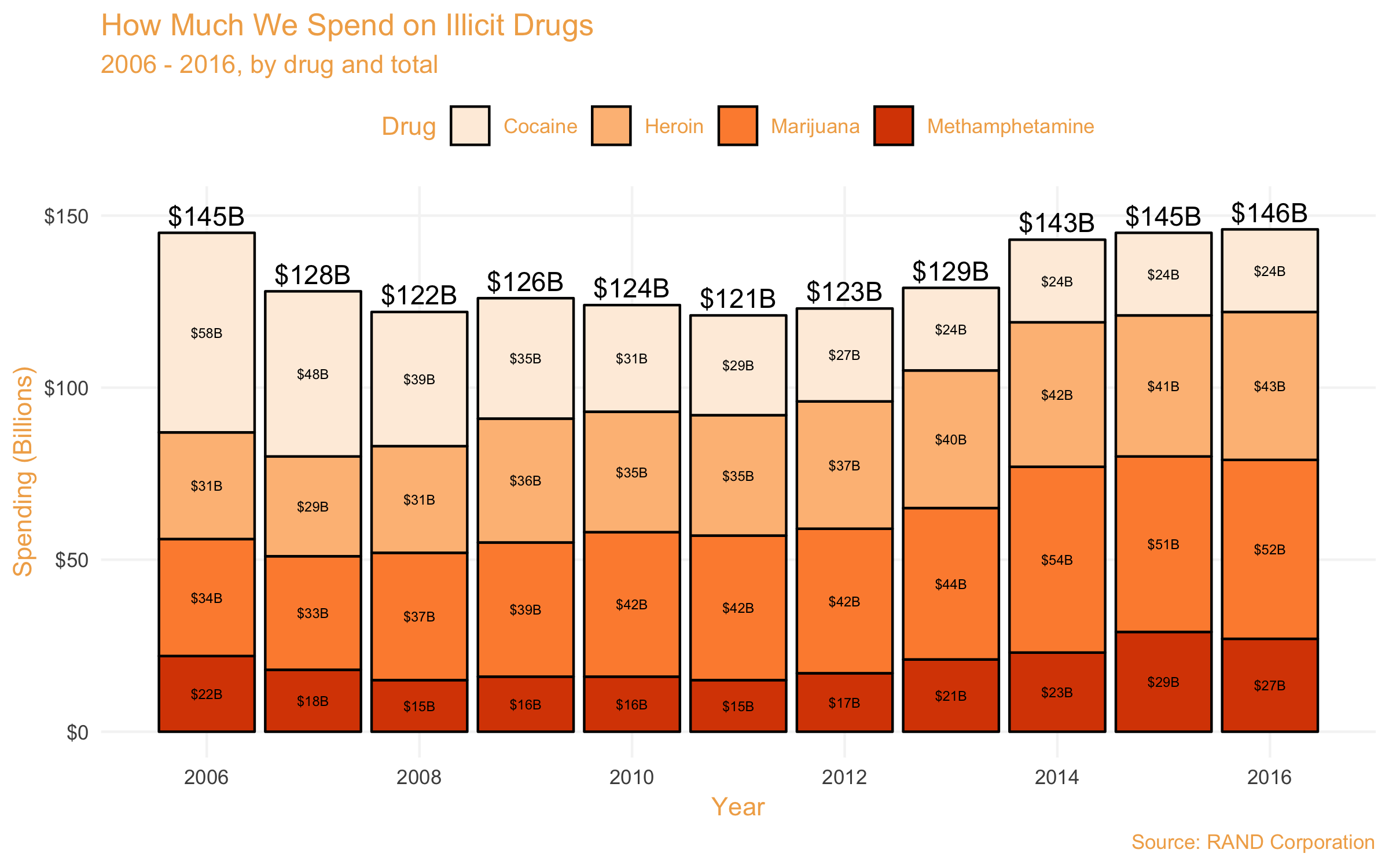 Assuming that the RAND approach holds water, it suggests that Americans are spending more on drugs, even as prices on the illicit markets have declined. For context, the $150 billion figure is on par with annual spending on alcohol, and slightly less than half of annual American spending on prescription drugs.

The increase in spending and consumption is explained partially by the spread of marijuana use in the wake of legalization at the state level. RAND also found a steady increase in the amount spent on heroin and methamphetamine; cocaine spending fell steadily until 2013, at which point it is estimated to have plateaued. 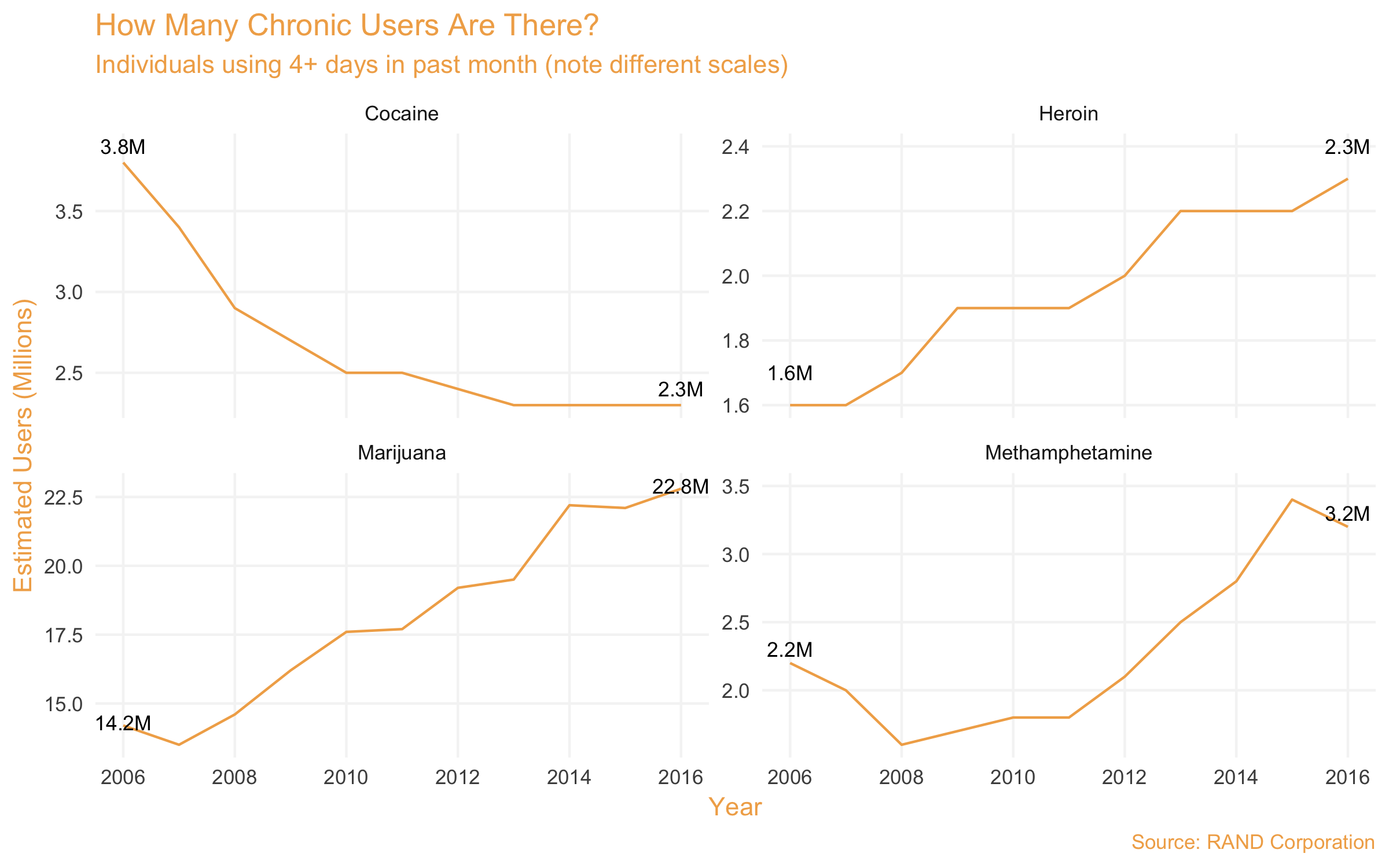 RAND also estimated the number of "chronic" users, defined as those who use more than four days in a given month. In line with expenditures, researchers found chronic use of cocaine has fallen, but has risen for marijuana, heroin, and methamphetamine. The study found much higher estimates of the number of heroin and methamphetamine users than standard surveys capture.

Although distinctly limited by methodological concerns, these data still contribute to the overall picture of the state of America's drug crisis, which is broader than any single narcotic. Rising spending on methamphetamine, and plateauing spending on cocaine, is in line with the increase in deaths associated with both of these drugs in 2017 and 2018, a trend frequently lost in discussion amid the focus on "opioid" deaths. The RAND study shows that Americans are using more of every drug, not just prescription opioids.

At the same time, RAND captures how little we truly know about how many, how much of, and which drugs Americans use. The report discusses how recent innovations in the marijuana and opioid markets—specifically, the rise of high-THC strains of weed and the advent of hyper-potent fentanyl and its derivatives—color how we think about the volume of drugs actually being consumed. More data—including better surveys, seed-to-sale information on legal marijuana, and a renewed ADAM—are all needed, the authors argue, in order to revitalize drug-use research.

"A contribution of this report is foreshadowing what additional types of data would help to quantify the scale of these markets in the future," the report says. "Regardless of how one feels about marijuana policy, there is no denying that legalization is producing a tremendous amount of information. . . . Figuring out how data from these new sources can be aggregated and manipulated to develop scientifically based insights should be a priority for those who want better information about changes in marijuana markets and the related consequences.

"With respect to the other drugs, it would be immensely helpful to bring back the ADAM program—or some version of it—so we can collect real-time drug market data, including objective (biological) consumption measures for cocaine, heroin, methamphetamine, and other drugs," the authors conclude.

Buttigieg: Heroin Possession Won’t Be Illegal Under My Administration

Sanders Pushed Legalization of All Drugs in First Senate Run

America Is in a Polydrug Crisis, New CDC Data Confirm