More Americans use products infused with cannabidiol (CBD) than use marijuana or other illegal drugs, according to a Gallup poll.

The comparison, although imprecise, indicates how swiftly CBD, one of marijuana's active ingredients, has risen in prominence despite a lack of scientific understanding or careful regulation of the substance.

CBD products are suddenly everywhere — a search of Amazon, for example, reveals more than 9,000 options. Americans can now buy CBD sodas, soaps, cocktails, and even dog treats. "Holistic" or "all natural" vendors of CBD products routinely tout their supposed medical benefits, often with no scientific backing and outsized promises, such as curing cancer.

The Gallup poll released Wednesday found that 14 percent of U.S. adults, roughly one in seven, "personally use CBD products." Half of respondents said they do not use CBD, while another 35 percent said they were "not familiar" with CBD products.

Although 14 percent may not seem like much, in practice this means that by some measures, CBD is more widely consumed by the adult population than any illegal drug, including marijuana.

The National Survey on Drug Use and Health, a federal survey administered by the Substance Abuse and Mental Health Services Administration, generally considers a person a user if he or she reports having used a substance in the past month. Comparing rates of past-month use in the 2017 NSDUH (the most recent available year) to the rate of CBD use identified by Gallup indicates that CBD is more popular than all the major illicit drugs combined, outpaced only by past-month use of cigarettes and alcohol. 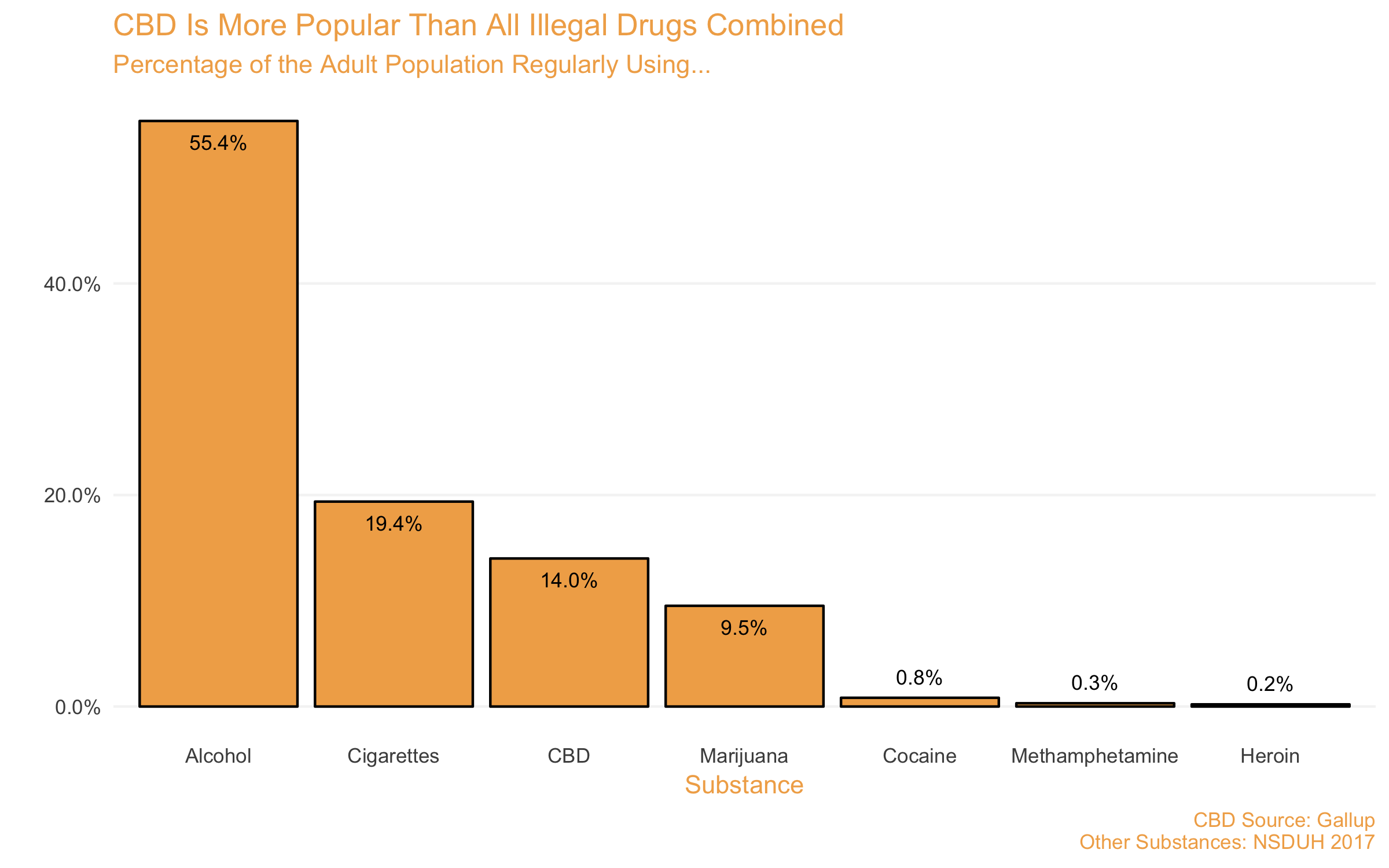 The two sources of data compared above are imperfectly analogous. It is likely, for example, that rates of marijuana use have increased somewhat over the past 18 months, while rates of cigarette use have likely declined slightly. Still, the comparison sheds some light on the rapid rise of CBD, in spite of the fact that much remains to be understood about the drug's possible effects, and extent to which it requires regulatory oversight.

CBD is one of the active ingredients in marijuana; tetrahydrocannabinol, a.k.a THC, is the other main one. Most CBD sold on the open market, however, is derived from hemp. The substance's explosion in popularity stems from one legal change: the 2018 Farm Bill, which legalized the cultivation of hemp and removed it from the harshest schedule of controlled substances, thereby permitting the production of CBD goods.

Importantly, the actual sale of CBD products for therapeutic purposes is still basically illegal unless approved by the Food and Drug Administration, which has only signed off on a single CBD-derived drug. CBD in non-medical applications, like food, is legal. But the rapid legalization of CBD production, combined with the FDA's lack of enforcement resources, have created an impossible regulatory situation. The result is de facto legalization, with little regulatory oversight, and a market full of questionable health and safety claims.

"The FDA is being pushed by all sides to act quickly," former FDA head Scott Gottlieb wrote in a recent op-ed. "Meanwhile, responsible food makers waiting for regulators to address the legal and safety considerations before launching CBD products are being eclipsed by unscrupulous purveyors."

CBD almost certainly has medical benefits — it has been approved for treatment of epilepsy, and further research is currently being conducted on its applications to Parkinson's disease, schizophrenia, diabetes, multiple sclerosis, and anxiety. But the drug has risks, too: human trials have identified "hepatic abnormalities, diarrhea, fatigue, vomiting, and somnolence" as side effects, while animal studies have found side effects including changes to hypotension, central nervous system toxicity, and harms to the male reproductive system.

All of this research barely scratches the scientific surface.

"We need more research but CBD may be prove to be an option for managing anxiety, insomnia, and chronic pain," Dr. Peter Grinspoon wrote at the blog of Harvard Medical School. "Without sufficient high-quality evidence in human studies we can't pinpoint effective doses, and because CBD is currently is [sic] mostly available as an unregulated supplement, it's difficult to know exactly what you are getting."

In other words, there just is not enough settled science to know what CBD really does. Gottlieb seems to agree: In his op-ed, he called for the FDA to expedite approval of certain CBD products, while putting the onus on firms to study the potential toxicity of CBD additives.

Either way, the survey data make clear that CBD use is becoming mainstream and will likely be a top priority for whoever replaces Gottlieb in the FDA's top job.