Democrat presidential contenders are rushing to roll out the farthest-left criminal justice proposal, with a unifying theme of being not only soft-on-crime but tough-on-cops.

"Criminal justice reform" is a watchword in the 2020 race, and it is not hard to see why. A poll commissioned by the American Civil Liberties Union found that 91 percent of Americans believe "the criminal justice system has problems that need fixing," and 71 percent say it is "important to reduce the prison population." President Donald Trump's administration seems to agree, partnering with both sides of the aisle in Congress to pass FIRST STEP legislation in 2018.

Democrats vying for the White House in 2020 are offering their own reform proposals. The plans on offer have increasingly drifted to the far-left. In a recent survey of Democrats' plans, the New York Times noted that "until recently, such ideas were considered so radical in the United States that they would have been immediately dismissed even among reform-minded lawmakers." Proposals to abolish the death penalty and free half of prisoners are unlikely to be popular with moderate voters or the general electorate.

Among the proposals least likely to command public support are plans to substantially increase federal oversight of local police departments. These ideas are far less certain to garner support among the general population, although they may appeal to far-left primary voters.

The police are far more popular with Americans than the criminal justice system is. Americans ranked police departments the third most trusted institution in a 2018 Gallup poll, trailing only the military and small business. Only 15 percent of those polled said they had little or no confidence in the police; nearly 30 percent held similar views about organized religion, the fourth-ranked institution. 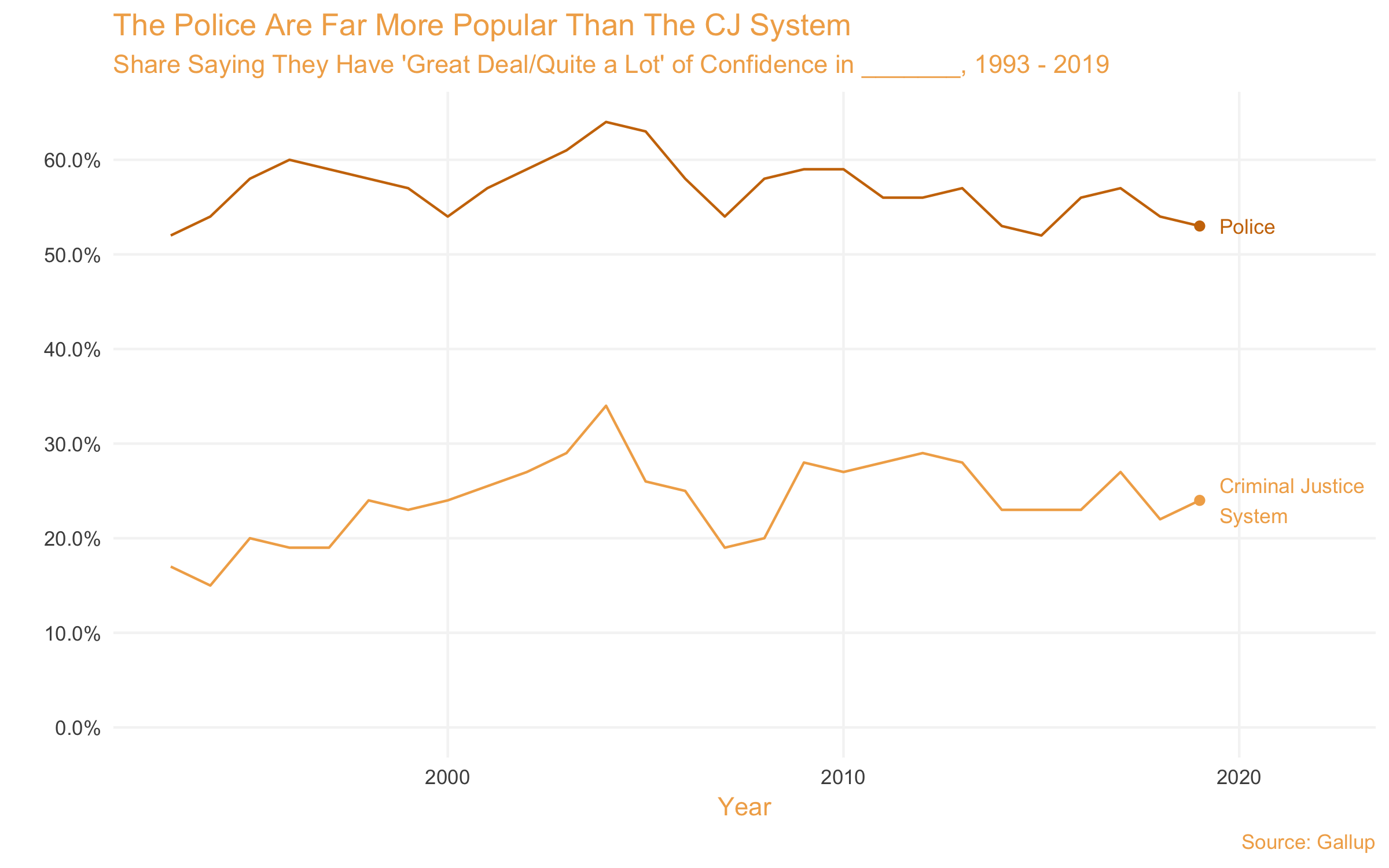 Despite a high confidence rating, four major Democrats—former Vice President Joe Biden, Sens. Elizabeth Warren (D., Mass.) and Bernie Sanders (I., Vt.), and former Secretary of Housing and Urban Development Julian Castro—have rolled out plans that mention or are in their entirety about increasing federal scrutiny on the police.

Biden's plan calls for a return to the Obama-era practice of widespread use of federal consent decrees and "pattern-or-practice" investigations to identify alleged racism in local police departments. The other three proposals would represent massive shifts in how the federal government approaches local law enforcement.

Warren, Sanders, and Castro join Biden in wanting to return to the use of consent decrees and "pattern-or-practice" investigations. All three also propose to restrict "qualified immunity" that protects police from being sued in many cases, and a federal standard for when force can be used. Castro would "restrict the use of deadly force unless there is an imminent threat to the life of another person."

In addition to these legal changes, all three of the more comprehensive plans would push for more oversight. Sanders and Castro both want more comprehensive data collection on police activity, including the use of force. They also back funding for implicit bias training and more body cameras in police departments.

What is motivating all of this scrutiny? Castro seems to capture the tenor of the others when he points the finger at "over-aggressive" and "racially discriminatory" policing. The emphasis on force proceeds from a belief that police routinely shoot and kill innocent black men. Both Warren and Sen. Kamala Harris recently repeated the claim that Michael Brown, shot and killed in Ferguson, Mo., was "murdered." A grand jury refused to indict the officer and the Department of Justice under the Obama administration ruled the shooting "reasonable" in light of the threat posed by Brown. The Washington Post gave the candidates four Pinocchios each.

It is unclear, however, how much of an effect these proposals will actually have. There are roughly 1,000 fatal police shootings a year, barely a fraction of the 1.2 million violent crimes committed in 2017. Some of these shootings are likely justified. Even if the majority are not, it is hard to conclude that these rates merit a massive increase in government oversight, according to Rafael Mangual, a legal policy expert at the Manhattan Institute.

"Maintaining and encouraging meaningful oversight mechanisms within law enforcement agencies should be considered a necessary aspect of the justice system," Mangual said. "Their [2020 Democrats'] plans obfuscate reality by asserting—falsely—that police misconduct is so widespread as to be a national crisis. While there are instances in which police make mistakes or maliciously use excessive force, such instances are the exception, not the rule."

The Democratic story is further complicated by multiple analyses—one from 2017, another released earlier this year—that have found that police are not more likely to shoot black people than white people. That research, however, is the subject of methodological dispute among academics.

There is also reason to doubt some of their proposed solutions. Body cameras are popular for resolving he-said-she-said issues with police, but a study of D.C. police officers found them to have no statistically significant effect on actual use of force. Implicit bias training—which Castro, Warren, and Sanders would like to see implemented at police departments across the nation—has little evidence to support its claims of effectiveness.

One group already under enormous pressure likely would be negatively affected by these proposals: actual cops. Mangual said the proposals would increase the negative public perception of officers. He pointed to the New York Police Department, which has seen officers assaulted by bystanders during patrol and arrests in recent months, as an example.

"The sort of top-down scrutiny many of these candidates are proposing will almost certainly have a negative impact on police morale," Mangual told the Washington Free Beacon. "Both directly and by feeding a negative public perception of police, which can, as we've seen in New York this summer, manifest itself in troubling clashes between police and other community members. This, in turn, can also impact morale."

Such an impact would pose a challenge to police departments already facing serious problems with mental health. Police suicides have been rising year-on-year since 2016. As of 2018, an officer was more likely to take his own life than die in the line of duty. There have been more than 120 police suicides in the past eight months, including a rash of six deaths just in the NYPD. According to the Centers for Disease Control, the suicide rate for law-enforcement officers and firefighters is 40 percent higher than the national average.

To its credit, the Sanders plan at least promises to "incentivize access to counseling and mental health services for officers." How the other candidates would deal with the spate of suicides, and the added stress of their oversight proposals, is unclear.