Did you know that Republicans are "quietly turning against the death penalty"? So sayeth the Atlantic, in a lengthy story published Sunday in the wake of New Hampshire's abolition of the death penalty.

Sunday's article is just the latest in "conservatives who oppose the death penalty" coverage. Google some combination of "death penalty," "conservative," and "oppose" and you will find similar stories from outlets like the Guardian, Wall Street Journal, and Washington Post.

The Atlantic piece neatly summarized the tenor of such stories: "death-penalty reform has quietly broken through as a bipartisan issue—one that could portend a shaky future for capital punishment in the U.S."

The basis of this argument is that a handful of Republican state legislators have authored or signed on to legislative proposals to end the death penalty. But the implication is that conservatives are slowly but steadily getting in line behind the liberal consensus against the death penalty. 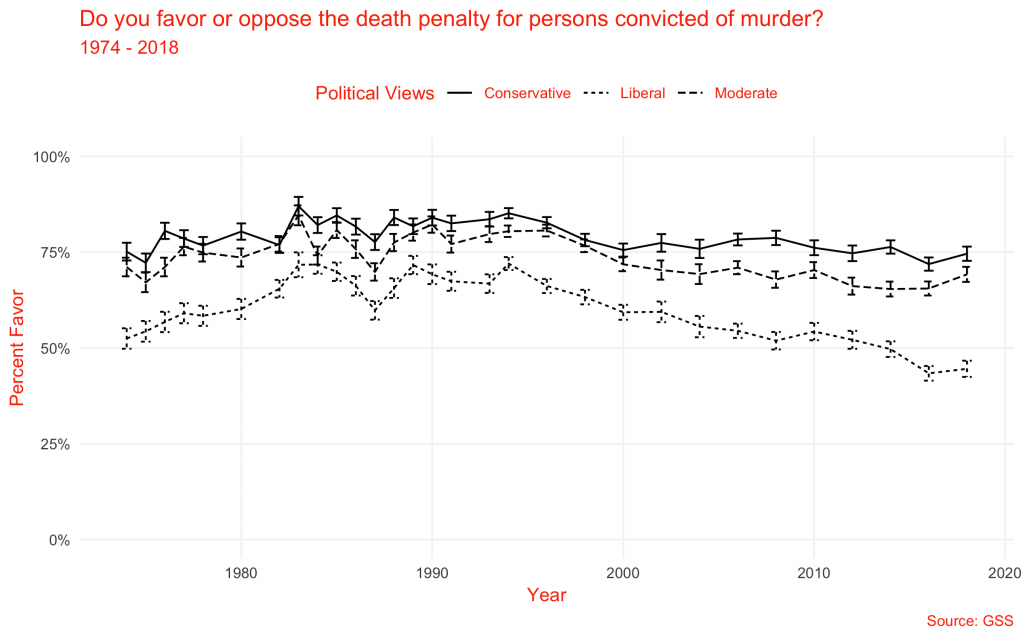 The General Social Survey, a major survey of public opinion administered by the National Opinion Research Center at the University of Chicago, has routinely asked respondents about their views on the death penalty since 1974; it also tracks respondents' political views. The results are pretty clear: Roughly three in four conservatives support the death penalty, and have done so at at least that rate since the 1970s. "Moderates" are slightly less favorable but still overwhelmingly supportive; only liberals are opposed, and have only fallen below majority support since about 2012.

The picture is much the same looking at partisan affiliation, which Gallup provides information on. About three in four self-described Republicans support the death penalty, compared to about half of moderates and a third of Democrats.

The Atlantic actually acknowledges these statistics in passing, noting that Pew found similar outcomes in a 2018 survey, and that the majority of executions take place in red states. The obvious implication—that GOP state legislators are backing appeal against the will of their base—is never spelled out.

But let's take the Atlantic's claim at face value. Maybe there's a great revolt going on among Republican state legislators? Indeed, New Hampshire's repeal bill could not have passed without the six Republicans in the State Senate and 77 in the State House (minorities of each caucus) who joined with Democrats to pass the bill over Gov. Chris Sununu's (R.) veto.

How widespread is abolitionism among actual state legislators? Conservatives Concerned About the Death Penalty, a lobbying group that claims to speak for conservative abolitionists, provided me with a list of state legislators co-sponsoring abolition bills in 2019. Across 11 states, they list 31, although that list probably slightly undercounts. The Atlantic piece points to a CCATDP report which finds that the number of GOP legislators sponsoring death-penalty repeal bills rose from four in 2000 to 40 in 2017.

The Atlantic doesn't report raw figures, preferring to bill it as an increase "by more than a factor of 10." Here's another way to look at it: Ballotpedia estimates that there are 3,860 Republicans in state legislatures currently. The number of Republicans sponsoring repeal bills went from 0.1 percent to 1 percent—progress!

This deceptive use of numbers by the Atlantic is characteristic of the abolitionist rhetorical strategy, which could be charitably called "selective" and uncharitably called "lying." The article repeats a number of dishonest or poorly contextualized claims, some of which were likely fed to its author by the death penalty opponents she interviewed. Here are just a few:

"The slate of repeal bills being considered across the country reflect growing opposition to the death penalty over the past two decades."

There is "growing opposition" to the death penalty insofar as it used to be enormously popular, and is now merely popular. Here is the general trend in support based on polling from Gallup, the GSS, and the Pew Research Center. 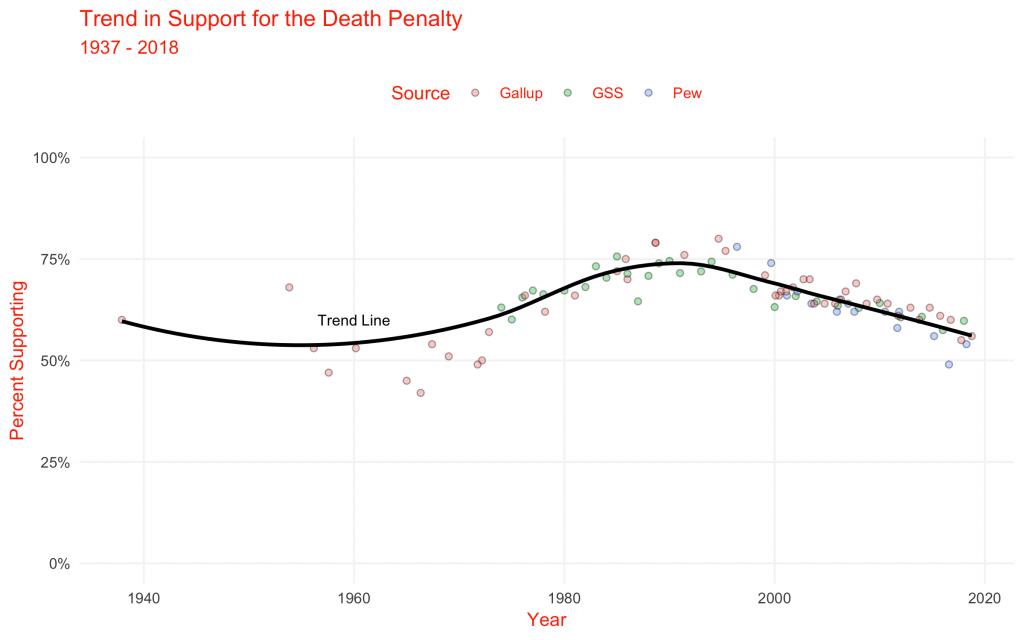 There's a very simple explanation for the decline: Support for the penalty rises and falls more or less in tandem with the homicide rate. America has grown safer over the past 25 years, and so people are less likely to see the need for capital punishment. However, any abolitionist argument which turns on this fact implicitly concedes that if crime begins to rise again—which it likely will—people will begin to support the death penalty again.

And it is always important to remember that the question used in these polls asks if people support the death penalty for homicide, not if they support abolition. A Quinnipiac poll last year found that two in three Americans want to keep the death penalty.

"A 2017 Gallup poll found that 55 percent of Americans supported the death penalty, a 45-year low."

The poll being cited can be found here. Net support for the death penalty in the poll was +14, an approval rating most elected officials would kill for.

But that's not the most recent data. The share supporting went back up in the most recent survey, to 56 percent. Gallup's most recent "moral acceptability" poll, released at the end of May, found that 60 percent of Americans think capital punishment is morally acceptable, compared to 35 percent who do not. Funny how neither of these figures were reported instead of or in addition to the 2017 minimum for support.

"Since 1999, there's been a 75 percent decline in executions, and in the 30 states that still have death-penalty laws, more than a third have not performed one in more than a decade."

This is factually accurate, but wholly omits the context. The delay does not represent some newfound reticence on the part of state governments. It is a product of the shortage of execution drugs, driven by abolitionists lobbying drug companies not to sell to state governments; and of the intolerably lengthy death penalty appeal process, also driven largely by abolitionist lawyers seeking to use every appeal possible to delay execution.

"Governors in four of those states have also placed moratoriums on all executions."

Why, then, does the mainstream media keep pushing the narrative that there is some emerging conservative consensus against the death penalty? Why do they keep regurgitating the talking points of the same few advocates? (The Atlantic article conspicuously lacks a quote from any expert who represents the majority of Americans who support the death penalty.)

On this we can only speculate. But one thing is clear: When it comes to the death penalty, most of the media is on one side, and most conservatives—indeed the majority of Americans—are on the other.