America’s thought leaders have spoken. French economist Thomas Piketty’s Capital in the Twenty-First Century is The Most Important Intellectual Endeavor of the Decade (At Least).

Unfortunately for the thought leaders, Piketty’s central thesis—that global income/wealth inequality has been rising precipitously for decades and will likely continue to do so because of capitalism—as well as the data he employs to support it, have come under attack in recent weeks from a number of prominent economic experts. Even Piketty’s thought-leading disciples concede that the Frenchman has some ‘splaining to do.

Last week, Giles observed that Piketty’s estimates of wealth inequality were "undercut by a series of problems and errors," with some of his data appearing to have been "constructed out of thin air." After correcting for these errors, Giles found that "Two of Capital in the 21st Century’s central findings – that wealth inequality has begun to rise over the past 30 years and that the US obviously has a more unequal distribution of wealth than Europe – no longer seem to hold."

Giles discovered a number of simple data collection errors—such as pulling reported wealth statistics from the wrong year—as well as a number of unexplained "tweaks" to the data. For example:

In the US data, Prof Piketty simply adds 2 percentage points to the top 1 per cent wealth share for his estimate of 1970, as you can see that in the screen grab below. The 1970 formula is also interesting as it relates the top 1 per cent wealth estimate in 1970 to the change in a different source’s wealth share of the top 0.1 per cent (column F). This odd assumption is not explained and is possibly a simple Excel problem. 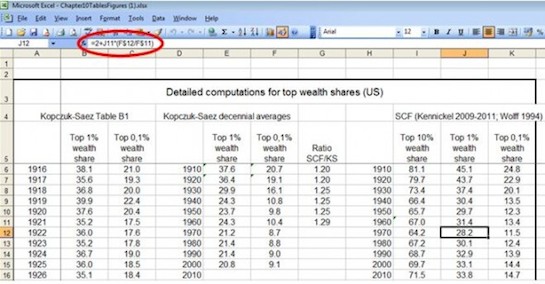 Giles found similar manipulations in Piketty's data for France and the UK. He takes particular issue with Piketty's estimates for the UK, which Giles argues "cannot be supported by the raw data," as depicted in the following chart: 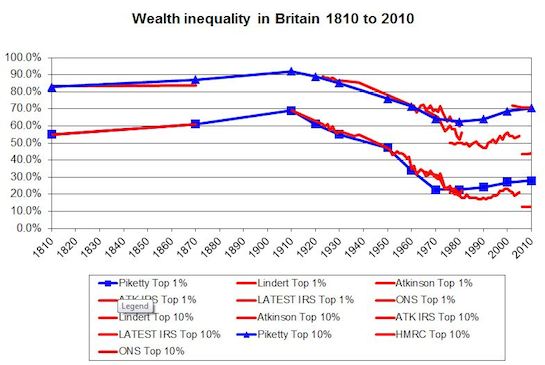 Giles, like other Piketty critics, takes issue with the Frenchman's cherry-picking of data from different sources, and his failure to adequately explain his reasons for doing so.

"That is a damning conclusion," writes Neil Irwin of the New York Times, "and if it holds up to scrutiny, would significantly undermine the case Mr. Piketty mounts."

A group of French economists has challenged Piketty’s central thesis about capital accumulation by noting that it appears to be driven entirely by rising housing prices, which, if removed from the equation, yields an "exactly opposite" conclusion:

First, the author’s result is based on the rise of only one of the components of capital, namely housing capital,and due to housing prices. In fact, housing prices have risen faster than rent and income in many countries.It is worth noting that "productive" capital, excluding housing, has only risen weakly relative to income over the last few decades. Over the longer run, the "productive" capital/income ratio has not increased at all.

Second, rent, not housing prices, should matter for the dynamics of wealth inequality, because rent represents both the actual income of housing capital for landlords and the dwelling costs saved by "owner-occupiers" (people living in their own houses). Logically, to properly measure capital, the value of housing capital must be corrected by measuring it on actual rental price, and not housing prices.

Third, when we apply this change, we find that the capital/income ratio is actually stable or only mildly higher in the countries analyzed (France, the US, the UK, and Canada) except for Germany where it rose. These conclusions are exactly opposite to those found by Thomas Piketty. However, this does not mean that housing prices do not contribute to other forms of inequality. When housing prices rise, owners of the housing capital hold a higher value that can be transformed into consumption. It is also more difficult for young adults to become homeowners. Housing incomes of owners however do not necessarily increase which casts serious doubt on Piketty’s conclusion of a potential explosive dynamics of inequality based on these trends.

In a May 14 op-ed in the Wall Street Journal, Feldstein argued that Piketty’s thesis "rests on a false history of how wealth evolves in a market economy, a flawed interpretation of U.S. income-tax data, and a misunderstanding of the current nature of household wealth."

Feldstein argues that Piketty fails to account for the fact that people do not live forever. That is, his assessment of wealth accumulation does not incorporate various factors that dilute a wealthy individual's assets after he dies, such as estate taxes and the fact that bequeathed assets are often divided among numerous heirs.

Piketty also fails to account, Feldstein argues, for tax-code changes beginning in the 1980s that "create a false impression of rising inequality." For example:

In 1981 the top tax rate on interest, dividends and other investment income was reduced to 50% from 70%, nearly doubling the after-tax share that owners of taxable capital income could keep. That rate reduction thus provided a strong incentive to shift assets from low-yielding, tax-exempt investments like municipal bonds to higher yielding taxable investments. The tax data therefore signaled an increase in measured income inequality even though there was no change in real inequality.

The Tax Reform Act of 1986 lowered the top rate on all income to 28% from 50%. That reinforced the incentive to raise the taxable yield on portfolio investments. It also increased other forms of taxable income by encouraging more work, by causing more income to be paid as taxable salaries rather than as fringe benefits and deferred compensation, and by reducing the use of deductions and exclusions. …

These changes in taxpayer behavior substantially increased the amount of income included on the returns of high-income individuals. This creates the false impression of a sharp rise in the incomes of high-income taxpayers even though there was only a change in the legal form of that income. This transformation occurred gradually over many years as taxpayers changed their behavior and their accounting practices to reflect the new rules. The business income of Subchapter S corporations alone rose from $500 billion in 1986 to $1.8 trillion by 1992.

Feldstein also faults Piketty for failing to account for policy changes affecting the lower portion of the income bracket, such as government transfer payments like Social Security and food stamps, which comprise "a large and growing part of the personal incomes of low- and middle-income households."

Accounting for these income sources, Feldstein argues, "would show a much smaller rise in the relative size of incomes at the top."

Reynolds raises many of the same objections as Feldstein, calling it "absolutely dishonest to compare the postwar estimates [of wealth] with prewar estimates" without accounting for changes in tax policy, or including government transfer payments as income:

Reynolds illustrates this disparity in the following chart: 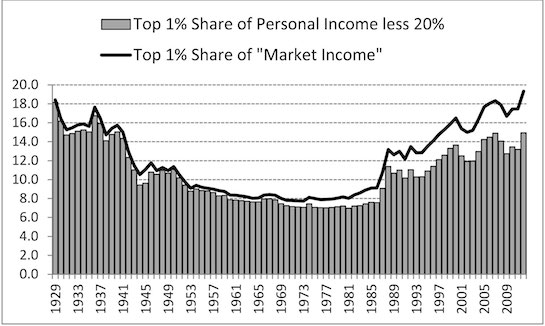 Piketty has issued a formal response to the Financial Times report, but even adoring followers like VOX DOT COM’s Matt Yglesias have described his response as a "a little half-baked." Paul Krugman concedes that "Piketty will have to answer these questions in detail." But, when it comes to suggestions that such errors could undermine Piketty’s central thesis, Krugman insists: "That can’t be right."

Why? Because, as Krugman himself recently explained, only conservatives are prone to ignore data that undercuts their worldview. Meanwhile, both Krugman and Piketty continue to rake in cash by being professionally concerned about income inequality. 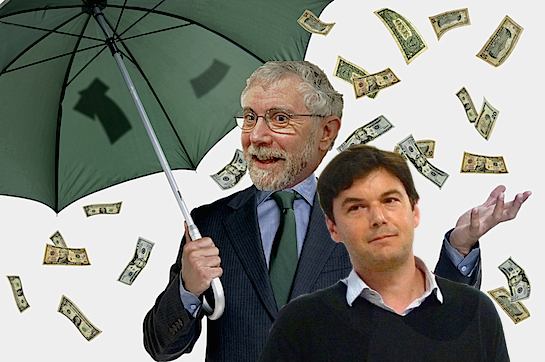