ALERT: Pete Buttigieg's New Electric SUV Was Made in Mexico

Transportation secretary Pete Buttigieg is finally getting back to work after taking nearly two months off while the bipartisan infrastructure bill stalled in Congress and the supply chain crisis wreaked havoc on the American economy.

Buttigieg celebrated his return to the office last week by showing off his security detail's brand new Ford Mustang Mach-E and in doing so revealed the Biden administration's open contempt for the hardworking Americans who continue to suffer under the president's failed leadership. 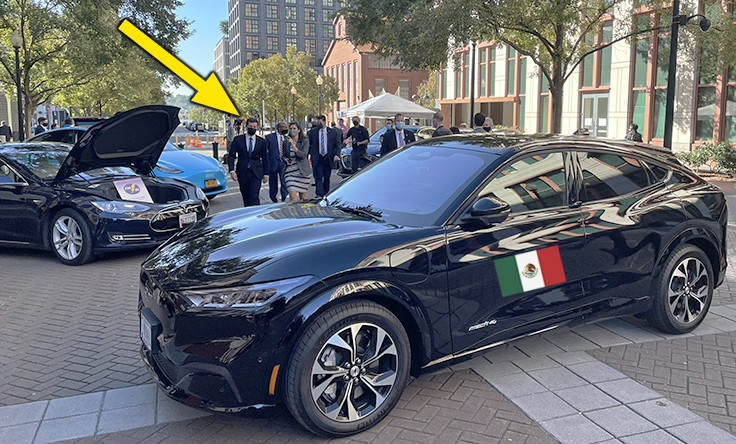 The fancy electric SUV, which retails for more than $40,000, was assembled in Mexico by foreign workers. Ford said the decision to produce the vehicle outside the United States was driven by its desire to turn a profit by using cheap labor. Another factor was the company's desire to avoid potential trade tariffs from the European Union and China, where Ford will produce the Mach-E for the Chinese market at its Chang'an Ford plant in Chongqing.

Americans who purchase the Mach-E are eligible for federal tax credits worth up to $7,500, which is great news for the wealthy liberals who are most likely to buy it and who made up a large percentage of Buttigieg's voting base during his failed presidential campaign in 2020. He was particularly popular in "boat shoe" strongholds such as Martha's Vineyard, Nantucket, and Cape Cod.

Buttigieg is not the only prominent Democrat to show off an expensive electric vehicle in the nation's capital. Rep. Alexandria Ocasio-Cortez (D., N.Y.) and her new Tesla have been spotted around Washington, D.C., on numerous occasions. In most instances, the congresswoman's white Model 3 Long Range has been parked illegally, usually near a Whole Foods. Tesla vehicles are manufactured in California, though billionaire founder Elon Musk recently announced his intention to move the company's headquarters to Texas.

The transportation secretary is particularly fond of being photographed. For example, Buttigieg was "randomly" "spotted" by a Politico reporter while riding a communal bicycle home from the office. He was wearing a helmet, like a total nerd. Establishing a bike-share program as mayor of South Bend, Ind., was one of Buttigieg's most notable achievements before he decided he was experienced enough to run for president.

Several days later, Buttigieg was "randomly" "spotted" by another journalist who reported that the secretary traveled through the district in a convoy of climate-destroying SUVs to purchase an electric bicycle. Buttigieg continues to be inexplicably beloved by mainstream journalists and other libs. Retired Harvard legal scholar Laurence Tribe, for example, predicted that Buttigieg would "make the post of transportation secretary sexy."

Regrettably, the secretary's husband, Chasten, is no longer the political celebrity he was during the 2020 Democratic primary after telling the Washington Post he gained weight during quarantine and hates the D.C. social scene.