Pete Buttigieg's days as a bike share customer may have come to an end. The transportation secretary purchased his very own bicycle last week in the parking lot of a Pizza Hut in Washington, D.C.

Regrettably, the failed candidate's fondness for self-propelled transportation was overshadowed by his lust for environmental violence. According to an account of the transaction posted on social media, Buttigieg arrived at the Pizza Hut in a convoy of at least four government SUVs spewing deadly carbon dioxide into the atmosphere.

"Our neighbor sells used bikes, and last week he met a customer at a Petworth Pizza Hut. He said he was waiting for the person when a couple of black government SUVs pulled up and then a couple more—and then, out pops Pete Buttigieg," Boston Globe journalist Jazmine Ulloa wrote on Twitter. "He sold a hybrid commuter to the U.S. secretary of transportation that evening. Turned out my neighbor had been talking to Buttigieg's husband, Chasten, all along."

Buttigieg's decision to travel by SUV convoy was an especially craven act of environmental injustice (aka violence) because of his refusal to make use of the D.C. metro area's public transportation system—a paragon of efficiency and convenience thanks to decades of Democratic Party stewardship.

A Washington Free Beacon analysis shows that the journey from the Department of Transportation headquarters in Navy Yard to the Pizza Hut in Petworth is a straight shot up the Green Line and back. Buttigieg claims to support public transit, but perhaps it's all for show. Unfortunately, most hardworking Americans can't afford their very own convoy of government-issue SUVs. 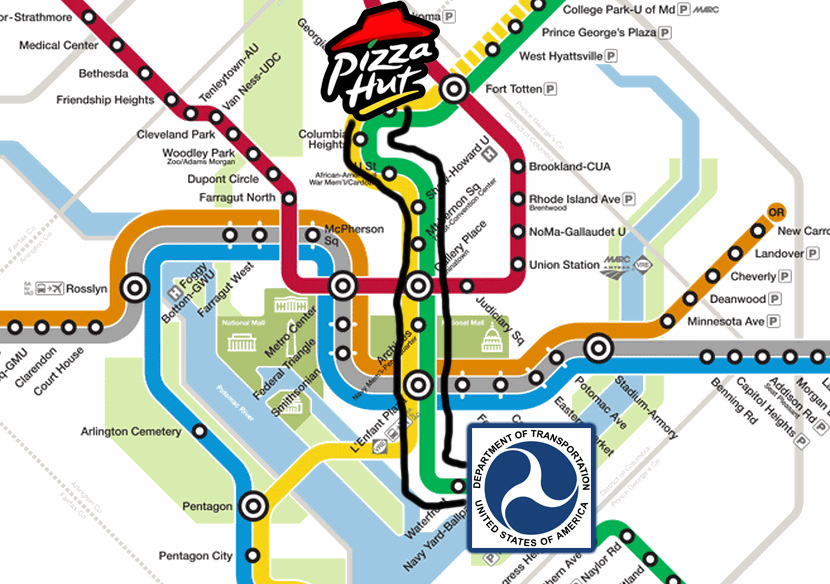 Buttigieg's preference for fancy travel at the expense of the environment is nothing new. In 2019, during his failed campaign for president, Buttigieg spent hundreds of thousands of dollars on private jets, more than any other Democratic candidate at the time.

The former mayor of South Bend, Ind., defended his use of private air travel during a CNN town hall by saying America was a "very big country." Buttigieg has also suggested that Americans who eat hamburgers and use plastic straws are "part of the problem" when it comes to combating climate change.