Prominent members of Ruth Bader Ginsburg's minion army of woke stans were duped into promoting "fake news" about the late Supreme Court justice, a sign that highly educated liberals are particularly vulnerable to misinformation that reinforces their ridiculous worldview.

The Babylon Bee, a confirmed "fake news" and conspiracy theory website, recently published an article suggesting that NBA players would don frilly lace collars to honor the passing of Ginsburg, who on Friday became the first woman to lie in state at the U.S. Capitol.

The story is false, but that didn't stop grief-stricken libs, whose cult-like reverence for "Notorious RBG" has raised concerns among independent mental health experts, from promoting it on social media. 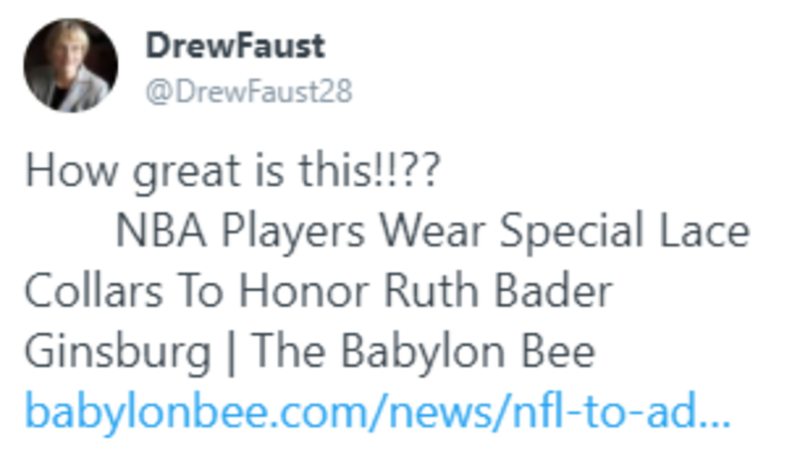 Hundreds, perhaps even thousands, of non-elite libs joined in on the action. The #Resistance couldn't resist the urge to believe that the NBA had taken yet another symbolic step on the road to wokedom. They wanted to believe and lacked the intellectual curiosity to check the facts.

Of course, not all RBG stans were duped by the fake news. Instead of celebrating the NBA honoring the late justice, they were calling out the league for failing to do so. ESPN host Rachel Nichols, for example, scolded the NBA for honoring the life of actor Chadwick Boseman but doing nothing to acknowledge the death of an icon of female empowerment.

"In a league that absolutely holds equality as a core value, the icons of that equality can't only include those who helped the men we see on TV, but those who paved the way for the women who work right alongside them," Nichols tweeted.

Elite liberals are perhaps the loudest opponents of conspiracy theories and so-called "fake news" websites because they worry about their influence on unsophisticated common folk who get their news on Facebook. This week, those same elite libs proved they are just as susceptible to false stories that reinforce their own steadfast belief in their moral superiority over the rubes. Should they even be allowed to vote in elections? That's a question for another day.