The updated piece still makes no mention of hijackers' motive.

The New York Times deleted a tweet and updated a piece Wednesday after writing that the 9/11 terrorist attacks occurred when "airplanes took aim" at the World Trade Center.

"18 years have passed since airplanes took aim and brought down the World Trade Center," the Times Twitter account tweeted. "Today, families will once again gather and grieve at the site where more than 2000 people died." The language about the airplanes "taking aim" was lifted from the linked Times piece. 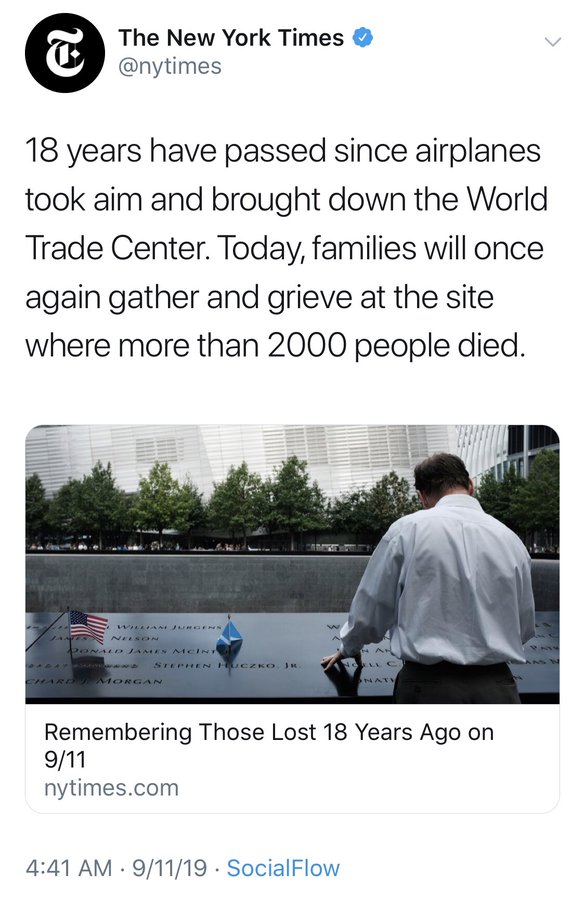 The Times's assignment of agency to inanimate planes, and apparent reluctance to acknowledge that they were flown by Islamic terrorists, immediately sparked mockery and criticism. "Man, those towers really must have done something to upset those airplanes," read one typical tweet. Others noted that "more than 2000 people" was an awkward descriptor, when the casualty total was closer to 3,000.

Eventually the Times deleted the tweet and updated its piece. The piece now reads, "Eighteen years have passed since terrorists commandeered airplanes to take aim at the World Trade Center and bring them down."

We've deleted an earlier tweet to this story and have edited for clarity. The story has also been updated.

The updated piece refers to the 9/11 hijackers simply as "terrorists" and does not provide any details about their affiliation or motive. The attack was carried out by operatives of the radical Islamic terrorist organization al Qaeda and was ordered by their leader, Osama Bin Laden.