President-elect's promised end to executions a win for liberal billionaires

Michael Dukakis sank his 1988 campaign for the White House with a single question at the second presidential debate: If his wife were raped and murdered, would he support executing her killer? The Democratic nominee's jumbled answer, defending opposition even to that death, is considered one of the factors that led to George H.W. Bush's landslide victory that November.

In Dukakis's time, opposing executions was an electoral death sentence. Three decades later, Joe Biden will be sworn in as the first president in the modern era elected under an explicit promise to end federal executions and on a party platform that endorsed abolishing the death penalty for only the third time since 1960.

Biden has been mum on whether he would immediately enact a moratorium on executions upon inauguration or whether he would only seek abolition through Congress. His team did not respond to a request for comment. Either way, his posture is a radical departure from that of President Donald Trump, who has overseen the most federal executions in at least a century.

Biden's history-making stance—a reversal of a position he appeared to hold as recently as his time in the Obama White House—is a product of the influence of the so-called criminal justice reform movement on him and senior members of both parties. While some of that movement's goals are popular, ending capital punishment is not. A majority of Americans, including 40 percent of Democrats, still favor death for murderers; nearly 60 percent oppose abolition.

Instead, Biden's about-face on capital punishment is a major victory for some of his party's wealthiest benefactors, who are uniquely opposed to the practice: The richest Democratic donors are 40 points more likely to back death penalty abolition than the party’s rank and file. This group has a history of backing anti-democratic efforts to block executions. Now, their project has its most powerful ally yet, one whose decisions could end the death penalty—whether the American people like it or not.

That alliance was once unlikely. Biden's new position is a substantial departure from his decades in the Senate. The death penalty was central to his now-infamous 1994 crime bill, which included 60 new capital offenses. As Biden then described it, the bill's authors intended to "do everything but hang people for jaywalking."

Early in his 2020 campaign, however, Biden signaled a change of heart. While answering a question from a New Hampshire voter, he congratulated the state on its recent decision to abolish the death penalty. A month later, he released a criminal justice platform that explicitly endorsed replacing the federal death penalty with life without parole and pushing states to do the same.

Biden's reversal put him to the left of both Barack Obama and Hillary Clinton but typified the stance of Democrats in 2020. All but one of the Democratic primary candidates—Montana governor Steve Bullock—opposed capital punishment.

Biden's position, however, appears more than primary posturing. He has indicated that criminal justice reform advocates are a key constituency, giving them private access in a recent meeting about his Justice Department, where leaders including the NAACP's Sherrilyn Ifill pushed Biden to appoint a reformist attorney general—a stark departure from Trump's picks.

Such influence is a sign of the changing times. Death penalty abolition once stood out as an electoral nonstarter, dooming candidates like Dukakis. But that has changed in recent years.

"In the 1990s, opposition to capital punishment was political poison," said Robert Dunham, director of the nonpartisan Death Penalty Information Center, adding that "we've seen in the last five or six years that candidates who have been opposed to capital punishment have not been defeated because of it."

The political viability of death penalty opposition tracks with declining support for the death penalty, which has fallen from a peak in the 1990s. Today, 55 percent favor it, compared to 80 percent in 1994.

That decline was not uniform across the political spectrum but has been most drastic among liberals. Data from the General Social Survey show that support fell by about 11 percentage points among self-identified conservatives (85 percent to 74 percent) and moderates (80 percent to 69 percent). But among liberals, it's plummeted from 72 percent to 44 percent. 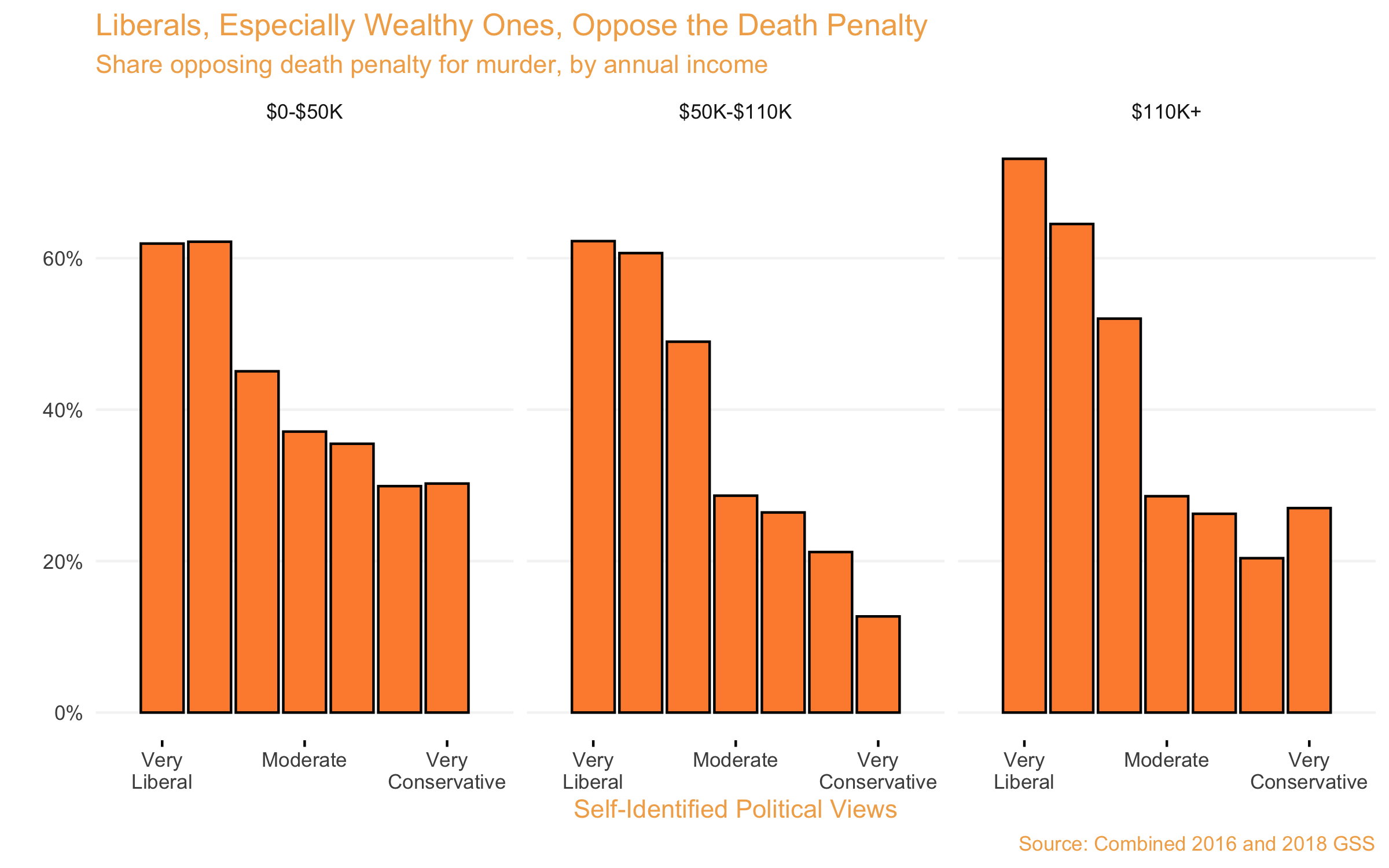 Some wealthy liberals have in fact made death penalty abolition a political goal, spending millions to push an otherwise unpopular idea to the front of the criminal justice agenda.

The issue is a major priority for prominent donors such as George Soros, whose Open Society Foundations network has spent millions on criminal justice generally. But it has also attracted lesser-known donors, such as the Fund for Nonviolence and Vital Projects Fund, which leverage the estates of successful businessmen for leftist political projects.

Pro-abolition groups enjoy generous patronage from such groups. Last year, tax documents show, Soros gave $1.5 million to the Eighth Amendment Project, which aims to "unite and lead the national movement to end the death penalty." He also gave $600,000 to Equal Justice USA, a New York-based anti-death-penalty group which in turn sponsors, among other initiatives, Conservatives Concerned About the Death Penalty, a group that backs the inaccurate claim of bipartisan death-penalty opposition.

Equal Justice USA also enjoys the patronage of Silicon Valley through a donor-advised fund run by Patty Quillin, wife of Netflix founder Reed Hastings. Quillin is just one of the tech-wealthy who have spent big opposing capital punishment.

As much was clear in a 2016 referendum in California, Proposition 62, which asked residents whether they wanted to dump the state's death penalty. Six Silicon Valley elites, including Hastings and Laurene Powell Jobs, gave a cumulative $4.2 million for the pro-62 campaign. A further $500,000 from Soros and $1.85 million from liberal hedge-funder Tom Steyer means just eight wealthy liberals were responsible for 64 percent of pro-referendum spending.

All that money wasn't enough: Californians rejected Prop. 62 by a 6-point margin. Two years later, however, Governor Gavin Newsom (D.)—who backed Prop. 62 as lieutenant governor—unilaterally suspended executions. The move surprised California voters, who opposed it in polling. But it was likely the kind of bold action Newsom donors like Jobs, Hastings, and Soros had in mind when they gave five figures to his campaign.

Abolition's unpopularity regularly results in such end-runs around the democratic process. Nationwide shortages of execution drugs, which have plagued states for over a decade, are partially a product of lobbying of foreign pharmaceutical firms by groups such as Reprieve, a U.S.- and U.K.-based anti-death-penalty group that "partners" with pharmaceutical companies to stop their drugs being used in executions.

Reprieve's main arm, in the United Kingdom, has received support from donors including Soros, the Vital Projects Fund, and the Eighth Amendment Project. The dynamic is startling: Unable to win at the ballot box, anti-death-penalty billionaires like Soros fund a foreign activist group that lobbies pharmaceutical firms to cut off execution drugs at the source, stopping American states from carrying out duly issued death sentences supported by often-large majorities.

Such individuals will soon have a powerful friend in the White House. Indeed, the Biden administration's decision on whom to prosecute, what legislation to prioritize, and whom to nominate to the Supreme Court will have a profound effect on the future of capital punishment in America.

Biden could lobby Congress to legislatively end the death penalty. But he could also instruct his attorney general to refuse to seek death in federal prosecutions and have the Federal Bureau of Prisons decline to carry sentences out—a moratorium akin to Newsom's.

But the biggest prize for abolitionists would be the Supreme Court, which a Democratic majority—still possible in advance of January's runoff elections in Georgia—could hand to Biden. Doing so would allow a narrow minority of justices to once again overturn popular support for capital punishment, giving the democratically elected Biden a decidedly undemocratic lever.

It was through the Court, after all, that executions were suspended between 1972 and 1976. Its current conservative majority has moved to enshrine capital punishment's presumptive constitutionality. But liberal Justices Sonia Sotomayor and Stephen Breyer are likely votes for abolition. And Biden could add new justices—including through packing the Court—willing to take up a challenge, like the one recently filed by Obama solicitor general Neal Katyal, that would let them again suspend executions by fiat.

Abolition, in other words, is closer than many Americans may imagine. That they would overwhelmingly reject it seems to matter little to its opponents, to the billionaires who back them, and to Joe Biden.