Adidas and other major companies and universities are partnered with a nonprofit group under fire for posting anti-Israel and anti-Semitic materials that promote the Jewish state’s eradication.

Slow Factory is a nonprofit and online content mill dedicated to "social, cultural and environmental change." When Israel went to war with the Hamas terrorist group in mid-May, Slow Factory posted a series of messages accusing the Jewish state of "ethnic cleansing" and of being a "settler colonial project." It also called for "total revolution to liberate both man and land" for the non-existent state of Palestine.

"The Simon Wiesenthal Center is demanding that Adidas and other companies and entities remove their funding from a group that openly spouts lies and that adds a fuel to the fires that are endangering the lives of Jewish Americans as we speak," Cooper said. "It’s the height of irresponsibility." 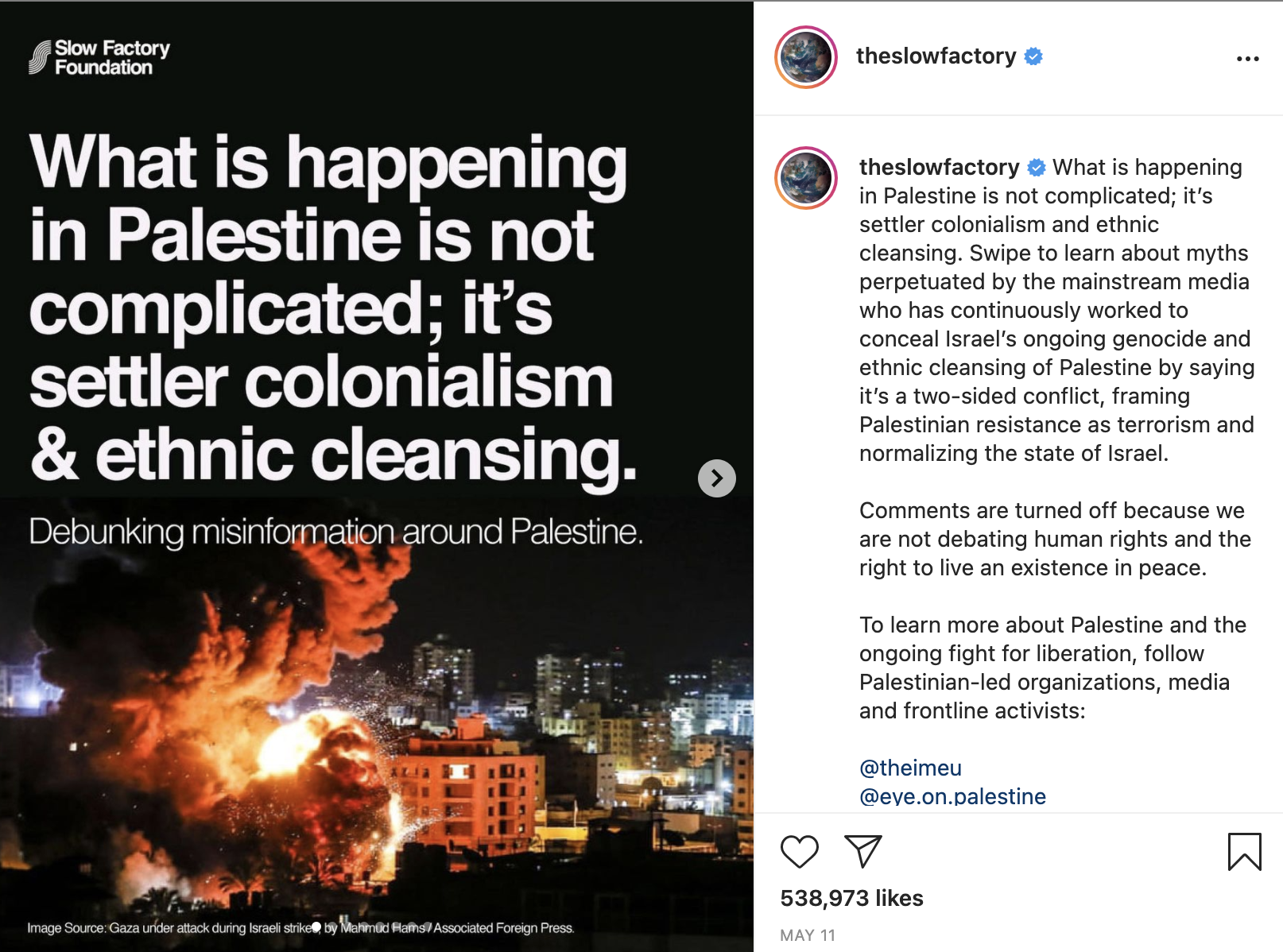 Slow Factory was founded by Céline Semaan and Colin Vernon, both artists, fashion designers, and media influencers who "advocate for social and environmental justice," according to the organization's website and press reports.

While Slow Factory boasts of its "anti-racist approach" to activism, posts reviewed by the Free Beacon blame Israel for the recent conflict and question the country’s existence. Other Slow Factory posts encourage pro-Palestinian demonstrations and attack Israel in vitriolic terms.

"Dismantle settler colonialism and end the occupation. The violence and displacement that the Palestinian people are facing at the hands of Israel is not a conflict, nor is it complex," the group wrote in a May 21 post on Instagram. "It is genocide and it is ethnic cleansing. It has always been Land Back and always will be, from the river to the sea. We say that with our entire being. Cease fire and cease occupation." 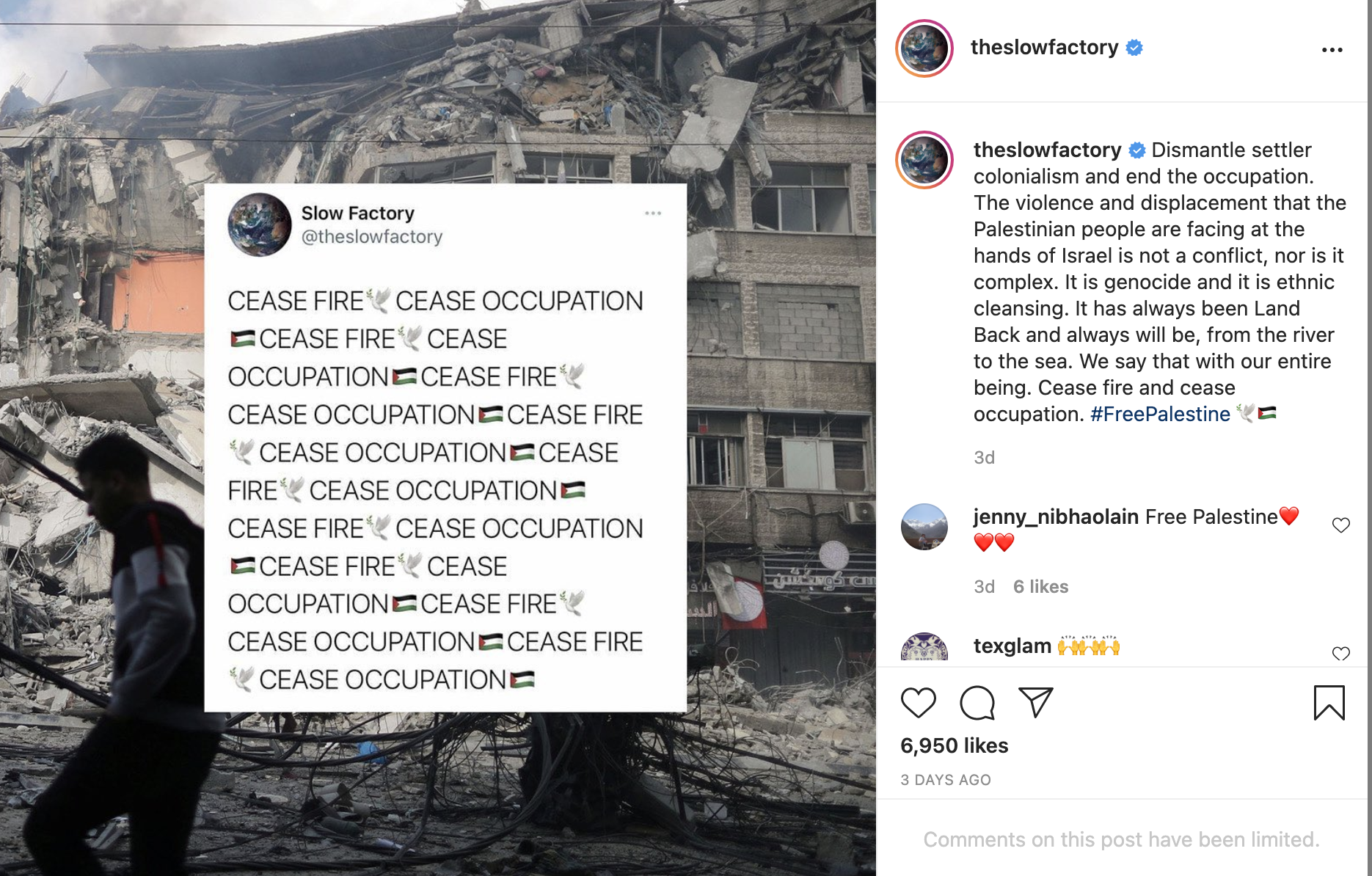 The anti-Semitic phrase "from the river to the sea" is used by Palestinian militants and others to indicate that Israel has no place in the region and encourage violence.

"If you are anti-colonial, anti-imperialism, anti-white supremacy, anti-genocide, anti-ethnic cleansing, you should be in solidarity with Palestinians," the group wrote in a May 16 post that came as terrorist rockets rained down on Israeli civilians. "The media may not be reporting on it but streets were flooded with people letting Palestinians know that they are not alone in their resistance. That we will all continue to fight for their liberation."

Slow Factory did not note in its post that many of the pro-Palestinian rallies in America and elsewhere have been marred by violence against Jews. Since May 10, there have been at least 26 anti-Semitic public displays across the United States in major cities, according to the Anti-Defamation League, which tracks violence against Jews. In one incident in New York City last week, a mob beat a man wearing a yarmulke. The victim told reporters his attackers called him a "filthy Jew" and a "dirty Jew."

"We are horrified to see a verified Instagram account and actual foundation continue to share obscene falsities in relation to the State of Israel, completely ignoring the 2000-year Jewish history and ties to the land. By spreading these type of blatant lies Aja Barber, Céline Semaan, and Henrietta Gallina [are] doing nothing but helping to fuel hatred and violence against Jews around the world," Rez said, referring to the group’s senior leadership.

"We ask their corporate sponsors, including the likes of Adidas, Mara Hoffman, and Swarovski, to re-examine their relationship with Slow Factory and not partake in enabling extremism and antisemitism," Rez said.

Slow Factory rejected accusations that its materials are anti-Semitic.

"Slow Factory is Pro-Semitic, Pro-Jewish and Pro-Arab. We do not call for the eradication of Israel, and do not condone or accept anti-Semitism in any form," Vernon, the group's founder, told the Free Beacon. "Supporting the right of the people of Palestine to freedom from violence is not anti-Semitic. Criticizing Israel is not anti-Semitic."

"We call for an end to violence by the IDF and Israeli settlers against the people of Palestine," Vernon added. "Apartheid … is the correct term for the ethno-religious basis of Israeli law." Occupation, he said, "is the correct term" for Israel’s actions in disputed territories. "Israeli Settlements in Palestinian territories constitute war crimes." Vernon did not respond to follow up questions about what partnerships with Slow Factory entail.

"Everything I’m reading here [on the group’s Instagram] is exactly anti-Semitic and exactly inspiring more violence against Jews in the streets of the country," Cooper said.