Survey after survey shows young Americans are increasingly unhappy, depressed, and even suicidal. They are America's future, and their outlook makes that future look grim. What's the matter with kids today?

Recent years have seen a rise in Americans 12 to 25 saying they are unhappy. Since 2012, the proportion of 8th and 10th graders who tell the Monitoring the Future survey that they felt unhappy has crept up from 13 percent to 18 percent. In roughly the same time, the proportion of 18- to 25-year-olds who say they are unhappy has risen from 11 to 17 percent, according to the General Social Survey.

These small increases underrepresent the growing group of young people for whom life has grown unbearable. Among both high schoolers and young adults, incidences of depression, anxiety, and hopelessness—culminating in major depressive episodes—have risen substantially. A recent survey from the Pew Research Center found that 70 percent of teenagers think anxiety and depression are major problems among their peers, easily outpacing bullying or drug addiction. 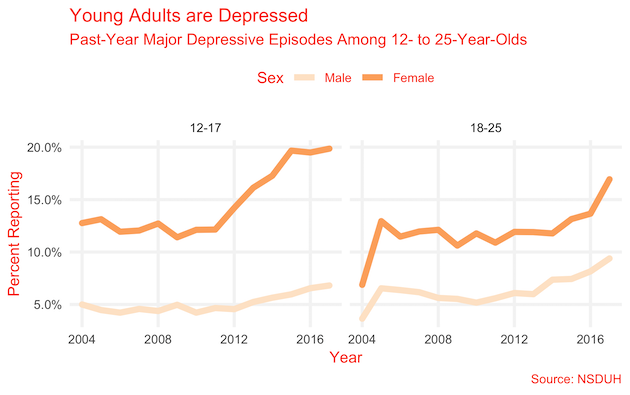 In the worst cases, these feelings may translate into thoughts of, or plans for, suicide. A recent survey, for example, found that the number of children 5 to 17 being admitted to hospitals for self-harm and suicide attempts doubled between 2008 and 2015. Even more sobering are the rising suicide rates themselves. 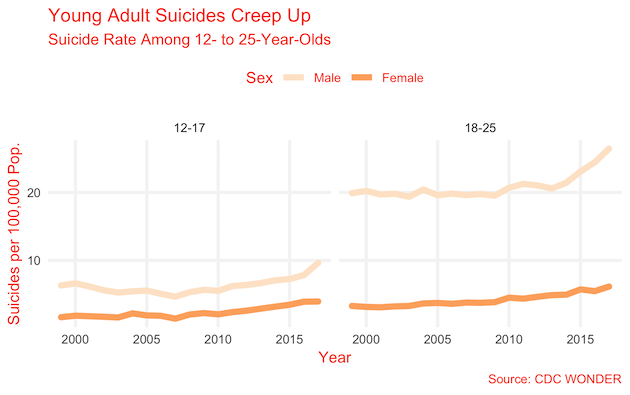 Why are young people so unhappy? Any big social phenomenon will have multiple causes, and everything from overprotective parents to a culture of safety has been blamed. That said, a few big trends in socialization, technology, and education may shed some light on how today's young people are living different, less happy lives.

There is nothing more human than socialization: We need other people to make the connections which give our lives meaning. Americans are making fewer such connections. And young people are no exception, demonstrating an anti-sociality very unlike their predecessors.

The number of times per week teens "go out" without parents has slipped, falling by half a day to a day per week on average. High-school seniors now spend an hour less per day socializing today than they did in the 1980s.

Teens are also less adventurous in their socializing. Research from psychologist Jean Twenge finds that twelfth graders in recent years are substantially less likely to have a driver's license (11 percentage point drop since 1999), have tried alcohol (14 points), have ever been on a date (18 points), or have ever had sex (two points).

Perhaps a decline in dangerous social activities is a good thing, but what about a reduction in work and church attendance? Twenge estimates a 20-point drop in the number of teens who have ever worked for pay; Pew found that teens spend 23 fewer minutes working for pay during the school year compared to ten years ago, and 15 percent fewer have summer jobs compared to twenty years ago. There is less data on religious attendance, but one survey found that 13 percent of teens identified as atheist, more than twice the average for those over 18.

This lowered sociality seems to persist into young adulthood, albeit in different forms. On the one hand, about half of 18- to 25-year-olds have consistently told the GSS that they spend evenings socializing with friends at least a few times a week. But other indicators of social commitment are seriously flagging.

Take marriage: nine percent of 18- to 25-year-olds were married in 2018, according to the Current Population Survey, compared to 13 percent 10 years ago and 16 percent 20 years ago. Thirty-three percent are out of the labor force, compared to 30 percent and 26 percent 10 and 20 years ago (a trend Twenge linked to sexlessness). And religious attendance has dropped too, with just 30 percent of young adults going to church at least monthly in 2018 according to the GSS.

These changes strongly explain the drop in young adults' happiness, social scientists Lyman Stone and Bradford Wilcox wrote in a recent Atlantic article, especially when you take the "sex drought" into account.

"Americans are offsetting some of the lost community and companionship of spouses and churches with closer ties to friends," the pair write. "But those friendships don't give young Americans the sex life that made previous generations happier."

One popular explanation for the decline in socialization is the rise of technology, as email and texting replace face-to-face interaction. This argument highlights another important reality for today's teens and young adults: they are the first cohort to grow up in an electronics-dominated world.

This shows in their habits. Essentially 100 percent of 18- to 24-year-olds are on social media. Fifty-four percent think they spend too much time on their cellphone; 72 percent of teens say their phone is sometimes the first thing they look at upon waking up.

This, Twenge argues in her book iGen, explains a lot about why they are unhappy. Using several national surveys, Twenge argues that screen-using activities are linked to indicators of depression and unhappiness. For example, she finds that kids using devices more than three hours a day are 30 percent more likely to have an indicator of suicidality. She also links increased screen time to declining sleep.

"The sudden, sharp rise in depressive symptoms occurred at almost exactly the same time that smartphones became ubiquitous and in-person interaction plummeted," Twenge writes. "That seems like too much of a coincidence for the trends not to be connected."

Other researchers have pushed back on Twenge's analysis. One study looked at college and high-school students' social media use, and found no relationship between frequency and depression, except among teen girls, for whom depression led to social media, not vice-versa. Another analysis, using Twenge's data, found that the relationship between social-media use and well-being was significant, but very weak in its effect.

Technology may not be decisive in young people's happiness, but it does seem to serve as a mediator. Wilcox, the sociologist, noted in an essay at Politico that time online is negatively correlated with time socializing offline, and hypothesized that the rise of "Netflix and Chill" may have replaced the kind of in-person interaction—including sex and marriage—that facilitates happiness.

Surveys of young people paint the most nuanced picture. Majorities of teens surveyed by Pew said that social media helps them feel more connected and offers them support, and teens who are online "almost constantly" are just as likely to socialize in person as those who are not. At the same time, Pew found that 45 percent of teens feel "overwhelmed" by drama on social media, and 43 percent feel pressure to post only positive content—experiences that could contribute to unhappiness.

According to the Current Population Survey, 2008 was the first year that a majority of Americans 18 to 25 were enrolled in or had graduated from college (today, about 55 percent are). Pew found that of the teens they surveyed, 59 percent expect to go to college—68 percent of girls and 51 percent of boys.

Ninety-five percent of teens say it is important to them to have a job or career they enjoy, and 51 percent say it is important to have a lot of money. Those that want the former, and quite possibly those that want the latter, will almost certainly require a college degree. The yawning gap between college and non-college workers keeps widening. Today, a college grad can expect to make 80 percent more than a high-school grad. The majority of the top 40 percent of the economy now have a college degree.

It is hard to doubt that the increasing "do or die" of education plays a role in the unhappiness of high schoolers. This is especially true as they increasingly derive meaning from having a good career: while 95 percent say a career matters, 47 percent say marriage matters, and just 39 percent say having kids matters.

The rising social and economic importance of college has some explanatory power for unhappiness among young adults as well. Thirty-nine percent of college students experience symptoms of depression; 24 percent seek psychotherapy. Social psychologist Jonathan Haidt and free speech advocate Greg Lukianoff have connected this trend to an increasingly overbearing "culture of safety" running from childhood to the campus, reducing young people’s ability to fend for themselves mentally.

There is another factor that may explain why post-grads are unhappy: $1.5 trillion in student debt. Americans aged 19 to 34 hold substantially more debt than their parents; even among those who eventually repay it, debt is linked to less marriage, later home-buying, and later and less childrearing, and worse mental health, all factors which make young adults unhappy.

This last point, that the education rat race may cause young Americans to form fewer lasting connections, dovetails neatly with the first. A common theme among the factors described here—socialization, technology, and education—is that young Americans are not building the connections and commitments they used to.

Young people have always leaned left, and today's cohort is no exception. Sixty-one percent have a favorable view of the word "socialism"; 73 percent support universal healthcare, and 50 percent would prefer to live in a socialist country. This radicalism should concern many readers. But perhaps young people are flocking to socialism not out of intellectual commitment, but because they are looking for somewhere to belong.

"Movements are, yeah, about causes and about progress and beliefs and feelings, but the strength of movements comes from social ties and peer pressure and relationships," a young organizer told New York magazine in a recent feature. "People are craving this. Your social world intersecting with your politics. A world of our own."

The nascent young left coalesces around myopic, even dangerous policies. But their existence suggests an absence of something else—not a need for more government, but a hole of connection that they want something, anything, to fill.