The teen birth rate has been cut in half since 2008, but the causes behind plummeting teenage pregnancies could also extend into adulthood and contribute to a demographic crisis.

Although teen pregnancy has loomed large in American culture in recent decades, rates of teen births, pregnancy, and even abortion have fallen precipitously. Public health experts have cheered this trend, given the links between teen pregnancy and adverse outcomes for both mother and child. But the general decline in childbirth among a younger cohort may carry over into later years, reinforcing America's record-low fertility rate.

The new Pew study breaks down the exact figures underlying the teen pregnancy drop. As of 2018, there were about 17 babies born per 1,000 girls aged 15 to 19 in the United States. That number is the lowest figure on record, with rates more or less continuously declining since 1990. 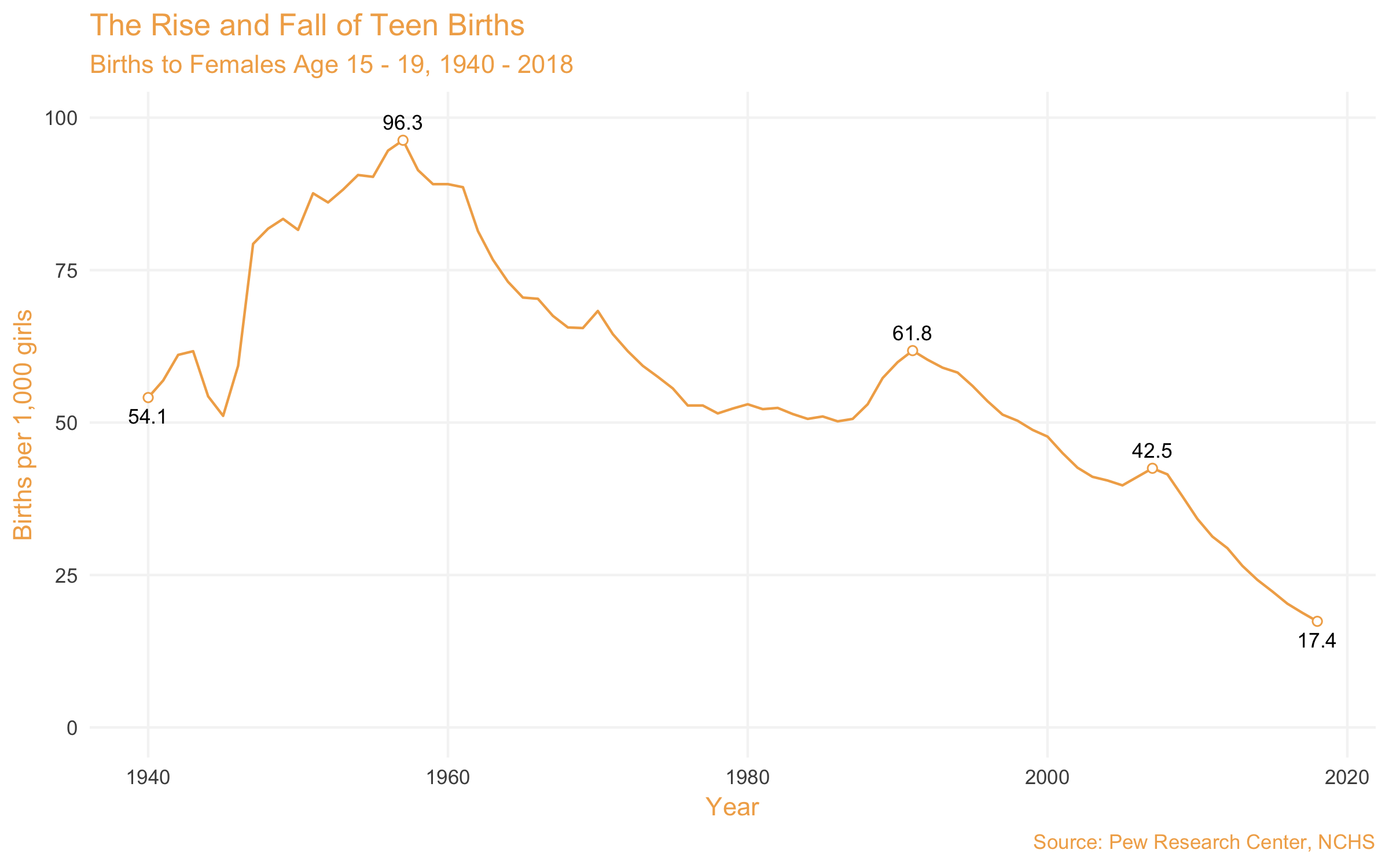 According to Pew, this remarkable drop shows up across all races. Between 2008 and 2018, Asian teen girls experienced a 74 percent drop, Hispanic girls 65 percent, black girls 60 percent, and white girls 53 percent. The declines obscure a remarkable convergence: Births to Hispanic and black teen girls, in particular, have approached parity with white and Asian girls. 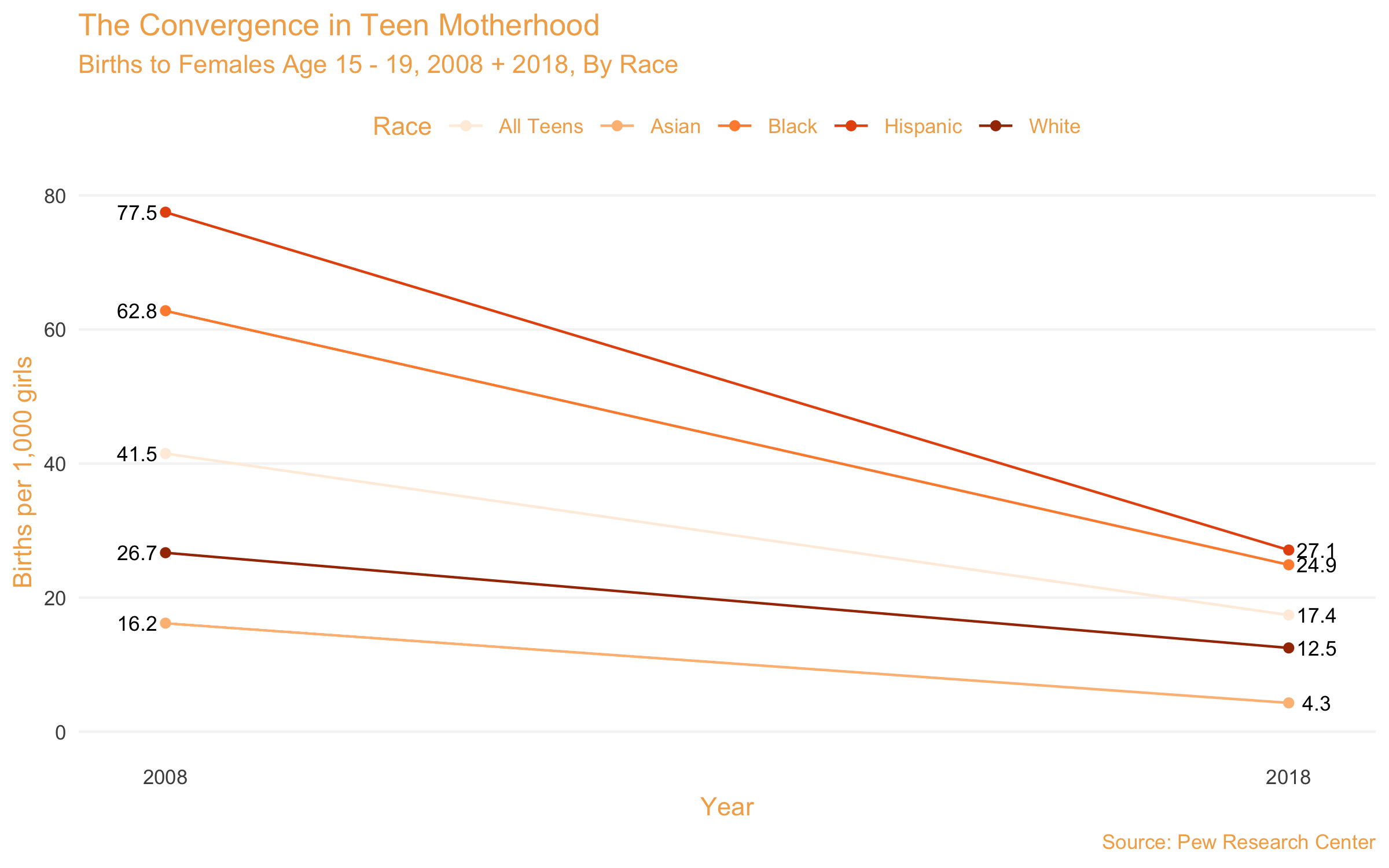 What is more, the decline is concurrent with drops in both the rates of teen pregnancy and abortion. Only four percent of girls 15 to 19 were pregnant as of 2013 and just one in every 100 girls had an abortion that same year.

Pew notes one major change since the Baby Boom. While most teen moms in the '50s and '60s were married, the rising age of first marriage means that most teen moms today are not married. About 90 percent of teen births today are to unwedded mothers; in 1960, 85 percent were to married mothers.

All of these numbers only get us part of the way to an explanation for declining teen childbearing. Pew researchers Gretchen Livingston and Deja Thomas offered several ideas.

The most obvious explanation is the economy: The teen birth rate was beginning to tick up again right before the Great Recession before falling side-by-side with the stock and job markets. This is at best a partial explanation, as birth rates were mostly falling before the recession began and continued to fall well into the recovery, producing what some commentators have called a "babyless recovery."

Culture may have also played a role. Economists have spent years debating whether the debut of reality shows like Teen Mom and Sixteen and Pregnant single-handedly drove down the teen pregnancy rate by revealing the challenges adolescent moms face. This particular debate remains mired in methodological disagreements, but there is good reason to believe that culture generally shapes fertility.

The culture angle ties into a more complicated, but comprehensive explanation: the rise of risk aversion among young people. Livingston and Thomas note survey data that show young people are having less sex; data from the Youth Risk Behavioral Survey indicate that 39 percent of high schoolers reported ever having sex in 2017, compared to 54 percent in 1991.

This decline in risky behavior has spilled over into other areas, including declining rates of teen drinking, drug use, and even learning to drive. In general, given the risks of such behavior, public health experts welcome these changes.

At the same time, however, it is possible that this risk aversion is not fading with age. The current 20s-to-30s cohort of young Millennials and older Gen Z-ers is having less sex and getting married less, increasingly preferring to put off such decisions until adequately "established." The result is lower rates of happiness, as well as lower birth rates. A 2019 analysis showed that 35 percent of the fertility decline (which concentrates among young people) was attributable to a drop in unintended pregnancies.

All that to say the trends driving down teen pregnancy may also affect the decisions of 20-to-40-year-olds. What has caused this general shift to risk aversion is unclear, although economic, cultural, and political factors all likely play a role.