Are Smartphones and Social Media Hurting Our Kids?

Should Congress ban kids from owning smartphones? According to a Thursday night monologue, television firebrand Tucker Carlson thinks the answer is yes.

In his nightly speech, the Fox News host inveighed against the effect smartphones are having on adolescents, arguing that "smartphone use makes your kids sadder, slower, and more isolated, and over time can kill them." Carlson called on Congress to regulate smartphone usage in the same way that it has regulated cigarettes, keeping them out of the hands of vulnerable youths with minds still moldable by exposure to not as-of-yet understood technology.

With his monologue, Carlson has brought to mainstream attention an ongoing academic debate over how smartphones and social media are affecting America's teens. The conclusions of that debate are by no means as unequivocal as Carlson was. But it is clear from research that something bad is happening to American adolescents, and that smartphone use has spread much faster than our understanding of its long-run impact on developing brains.

There is almost certainly something wrong with America's teens. Data show that young people are increasingly at risk for depression, mental illness, and suicide. A survey of pediatric hospitals found that hospitalizations of 5- to 17-year-olds for suicidal ideation or attempts doubled between 2008 and 2015; the CDC's research indicates that suicide has increased especially among teenage girls. 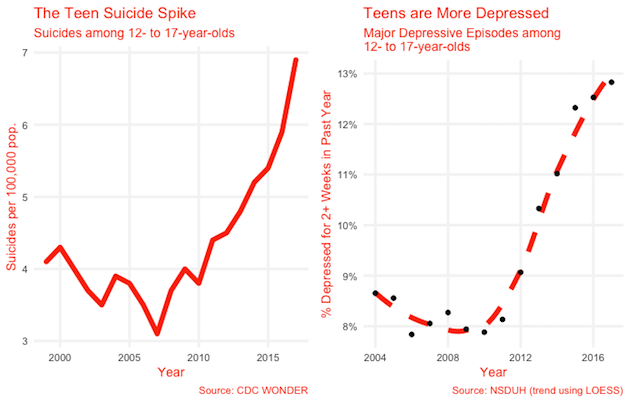 These increases go hand-in-hand with a decline in teen socialization. Forty-five percent of 12th graders now say that they never go on dates, compared to 14 percent as recently as the early 1990s. Teens are having less sex, a trend likely linked to rock-bottom teen abortion rates, but also indicating that teens spend less time on romance. Teens are even working less frequently than before, according to the Pew Research Center.

Bradford Wilcox, a professor of sociology at the University of Virginia who has written on the social implications of smartphones and screen time, told the Washington Free Beacon that the teen mental health crisis may be linked to the rise of smartphones.

"There's clearly a link between changes in depression, suicide, shifts in socializing. You have to ask yourself, what's happening in the social environment that's different from a decade, a decade and a half ago?" Wilcox said. "One of the obvious candidates here is the introduction of smartphones, social media, and the screen culture more generally."

There is clear evidence that kids do indeed spend a lot of time on devices and on line. A frequently-cited survey from Common Sense Media showed 13- to 18-year-olds spend an average of nine hours a day "using media for their enjoyment"; kids eight to 12 spend about six hours a day on average. A 2018 Pew study found that 54 percent of teens say they "spend too much time on their cellphone," and another that 45 percent say they are online "almost constantly." 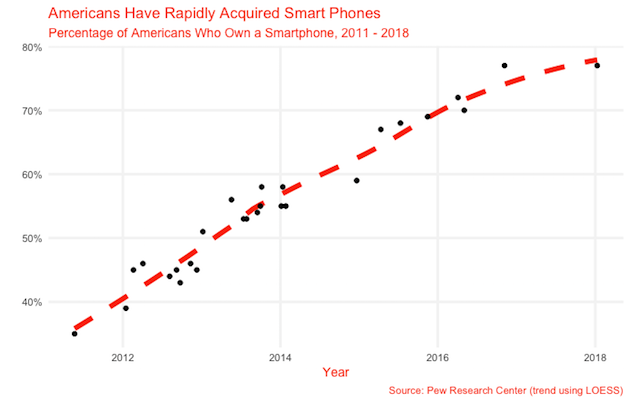 The same phenomenon is clear for teen social media use. Essentially every teen uses one or more social media sites, according to a 2018 survey from Pew, with YouTube being the most popular (85 percent using), followed by Instagram (72 percent) and Snapchat (69 percent). These figures in general represent an increase over the 2015 rendition of the same survey.

Still, it is apparent that teens are depressed and disconnected, and also hooked on their phones and social media. The question is does one cause the other?

That question is the source of much of the debate. Social phenomena like teen suicide are invariably complicated and multi-factorial, and sometimes have counter-intuitive explanations (for example, the increase in 2004 was almost certainly caused by a change in the FDA's required labeling on anti-depressants).

What is more, there is an open question of the direction of the relationship—social media and smartphone use might encourage depression and suicidal ideation, but the latter might also induce more of the former; or another factor might determine both. Research, cited by Carlson, links social media use to depression and abstinence to its alleviation. Other research, however, finds this claimed link wanting, and connects social media use to increased life satisfaction—suggesting that social media's emotional impact may be contingent on a number of other associated factors.

Unsurprisingly, there is copious analysis on both sides of this question. Much of the most popular work has been done by Dr. Jean M. Twenge, a professor of psychology at San Diego State University known for her work on intergenerational trends. In a much-read 2017 Atlantic article, Twenge argued that the current generation of teens are hooked on phone use, leaving them trapped in their rooms and exposing them to the toxic effects of social media.

In her scholarly work, Twenge has connected data from the nationally representative Monitoring the Future and Youth Risk Behavioral Surveillance Surveys to paint a picture of the relationship between screen time, depression, and suicidal ideation.

"The results show a clear pattern linking screen activities with higher levels of depressive symptoms/suicide-related outcomes and nonscreen activities with lower levels," Twenge and her coauthors write. "[A]dolescents using electronic devices 3 or more hours a day were 34 percent more likely to have at least one suicide-related outcome than those using devices 2 or fewer hours a day, and adolescents using social media sites every day were 13% more likely to report high levels of depressive symptoms than those using social media less often."

Twenge has used the same datasets to link increased screen time to less sleep among teens. Other research finds related effects: a 2016 meta-analysis found a connection between "problematic" smartphone usage and depression severity and anxiety, and a 2018 study found digital media use was associated with subsequent ADHD symptoms in teens.

But such a controversial topic will invariably see disagreement. For example, a recently released longitudinal analysis, which explicitly responded to Twenge's work, surveyed 600 adolescents and 1,100 college students for two and six years respectively. Its authors found that "among both samples, social-media use did not predict depressive symptoms over time" for either boys or girls. In fact, the study found a link in the opposite direction, i.e. that symptoms of depression predicted higher social media use among teenage girls.

Causal direction is just one issue for researchers; another is the question of effect size. Remember that social pathologies like teen suicide are basically always multi-causal. Just being able to say that screen time or social media use is related to increased suicide risk does not tell us how much of an effect (the magnitude) one has on the other—it is possible for a relationship to pass the test of statistical significance while not having a very big impact in terms of magnitude.

This insight underlies an analysis from two University of Oxford professors, who used three very large data sets (two from the United States, one from Great Britain) to exhaustively examine the relationship between screen time and well-being among adolescents. They found a statistically significant relationship between the two—but also that increased screen time explained at most 0.4 percent of variation in well-being when with other variables. In other words, statistically significant—but also very small in absolute impact.

"In fact, regularly eating potatoes was almost as negatively associated with well-being as was technology use," Nature noted in summarizing the paper, "and the negative association between wearing glasses and well-being was greater."

If all of this back-and-forth has you confused, you are not alone. Perhaps the most responsible conclusion is that the science is simply not settled, one way or the other, on how smartphones and social media affect teens, especially in relation to the myriad other variables that might explain the surge in adolescent depression. Neuroimaging research on the topic (which Carlson cited) is still in its infancy—while a major NIH study suggests a connection between social media use and adverse effects on developing brain, the scientists working on it emphasize that their work will need another decade to come to fruition.

Still, a lack of scientific consensus does not mean that no action is merited. That we do not understand the effect of smartphones on developing brains might recommend more caution—where 95 percent of teens having a smartphone suggests a lack of appropriate restraint.

What is more, there are vital differences between some screen time and a lot of screen time. Research suggests that there is some linkage between excessive screen use—around four hours per day—and worse mental health outcomes. The American Academy of Pediatrics recommends that parents explicitly limit the times and types of media use their kids engage in, including designating "media-free" times together.

Wilcox suggested that while the case for a federal prohibition is not yet strong enough, government and private actors both could do more to empower parents to limits their kids' smartphone usage. This could include phone service providers making it easier for parents to shut off kids' access after certain hours, or app designers introducing more effective parental controls. As the internet becomes more centralized in a few major sites—Facebook and Instagram, for example—constraining kids' use becomes substantially easier.