Americans Are Having Less Sex

More Americans reported that they did not have sex in 2018 than in any other year since at least 1989, new data show, further extending the "sex drought" of recent years.

These conclusions are based on recently released data from the General Social Survey, a massive and well-respected survey of Americans' behaviors and opinions administered biannually by researchers at NORC at the University of Chicago. Since 1989, the administrators have asked respondents how frequently they have sex, on a seven-point scale from never to more than four times per week.

Researchers looking at these data have noticed a surprising trend: Since peaking in the late 1990s, the proportion of Americans who report having sex in the past year has fallen steadily. The most recent GSS, released last week and covering 2018, found a record low: Nearly a quarter of Americans reported no sex. 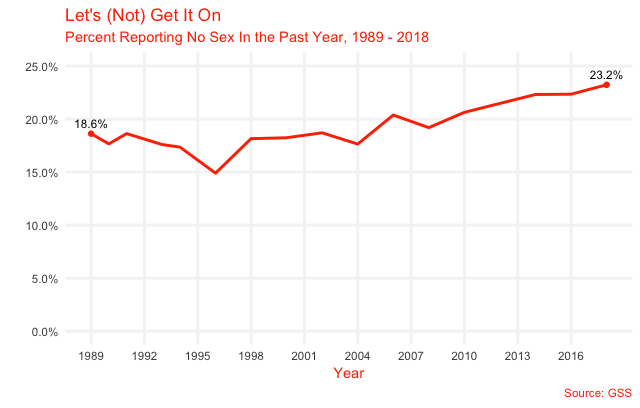 Some might be willing to dismiss the sex drop as a difference of opinion, Americans deciding that there should be sex for thee but not for me. But there are real social concerns at play. Sex is strongly linked with happiness, and record-high celibacy in the GSS is tied to record-low life satisfaction. More significantly, less sex means fewer babies, a big deal when American fertility is at its lowest point in recorded history. And perhaps most significantly, less sex may be linked to a broader decline in human connection, especially marriage.

What, then, is going on? A closer look at the data might shed some light. 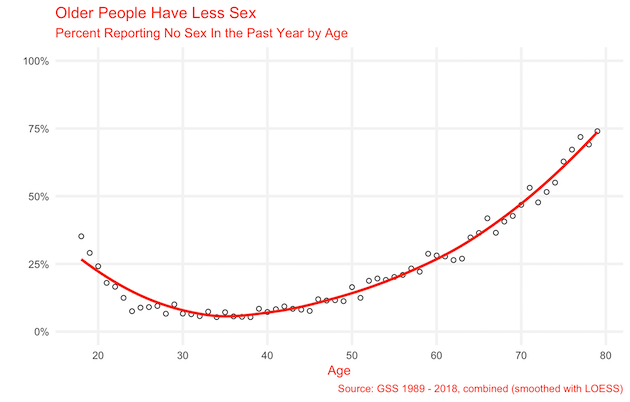 Older Americans have sex less. Using the combined GSS since 1989, we can see a smooth trend in past-year celibacy, which drops through respondents' late 40s before rising steadily to the point that three out of four 80-year-olds report no sex in the past year.

Not entirely. Although there are more older Americans, younger Americans are actually having less sex too. Social psychologist Jean Twenge has argued that much of this drop is a "cohort" effect—Gen. Z and Millennials have less sex than Gen. X, who had less sex than Baby Boomers, and so on. 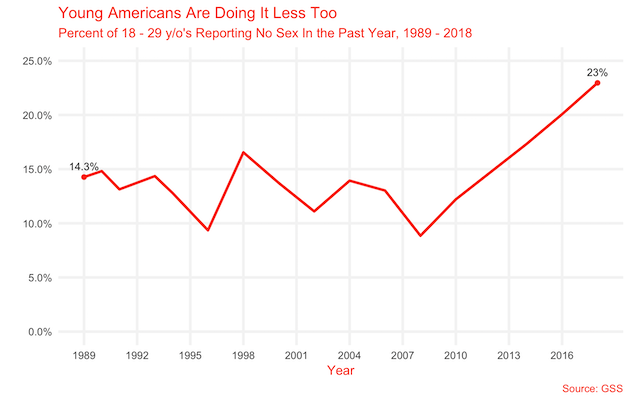 This trend comports with other ones—highlighted in Twenge's research—that suggest young people are less likely to engage in a whole set of higher-risk activities generally associated with adulthood. They drink less, do drugs less, drive less, and go on dates less. This is good in terms of safety, but also can mean young people are less willing to take a chance on a personal relationship.

"I think we're seeing a culture of caution getting a foothold among today’s young adults," Bradford Wilcox, a sociologist at the University of Virginia, told the Free Beacon. "They drive less, for instance. Sex is risky. So young men and women are less inclined to risk it."

Wilcox pointed to one other trend which he thinks explains young Americans' disinterest in sex: the rise of smartphones.

Regardless of what is causing younger Americans to lose interest in sex, the effects of this disinterest are pronounced. On the one hand, teen pregnancy and abortion rates are at all-time lows, a great sign by any measure. On the other, this disinterest in sex persists into Americans’ 20s, when they might otherwise be getting married and having kids. This explains why, in 2018, fertility among 25- to 29-year-old women fell below that of 30-34 year-olds for the first time in recorded history.

This link to childrearing highlights the last obvious cause of the sex drop: the decline of marriage. According to the Census, 58 percent of American adults were married in 1990; that number fell ten percentage points by 2017, a far larger change than the number of Americans shifting into the over-65 bracket in the same time period.

This matters because there is a strong link between being in a stable, monogamous relationship and getting some. Although hook-up culture promises more sex, the opposite is true: among unmarried Americans, some have a lot of sex, while most have little to none. 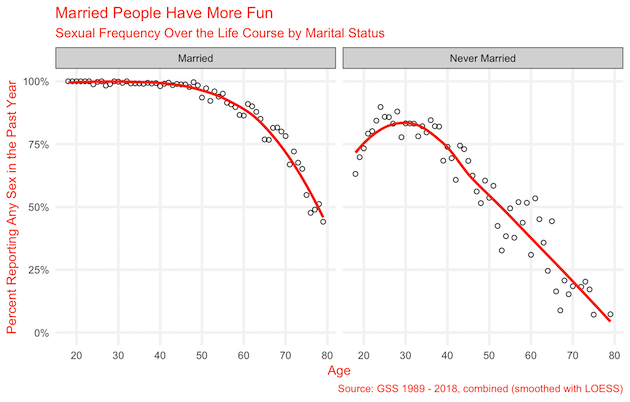 This holds true in the GSS: married people are more likely to have sex in the past year than single people, across the entire lifespan.

Some social conservatives might cheer the sex drop, seeing in it a more prim and proper culture. But public opinion has clearly not swung that way—rather, it seems to be the case that eroding sexual mores and a decline in sex actually go hand-in-hand. This makes sense when we understand the marriage connection. Do away with stable, long-term monogamy, and sex will go with it.

This fact points to a bigger one: Americans today are less connected than ever, and their sexual choices reflect that reality. Whether it is less marriage or more smartphones, Americans are coming apart. In other words: America might be in need of some sexual healing.