Crime is spiking in public transit systems on opposite sides of the country, as both New York City and San Francisco struggle with a surge in harassment, assault, and even major violence.

The underlying causes of these crime spikes, experts tell the Washington Free Beacon, remain unclear. But the spikes cast serious doubt on the experiments in progressive prosecution and policing both cities are currently engaged in. As America's two-decade crime decline begins to plateau, the upswing in lawlessness in these public spaces may indicate what other cities can expect if they adopt a similar approach.

In July of 2018, San Franciscans were stunned by three murders aboard the BART in one week, culminating in the stabbing death of an 18-year-old girl. The deaths have continued into this year—in mid-November, 49-year-old Oliver Williams was stabbed to death trying to stop his killer from stealing the shoes of another passenger.

Although the BART murders are the most shocking incidents, they are part of a larger rise in violent crime—particularly robberies and aggravated assaults—on the transit system since 2014. A recent report from an Alameda County grand jury quantified the scale of the problem, noting that the rise in crime has driven BART ridership down by 8 percent since 2016, despite population growth in the Bay Area. 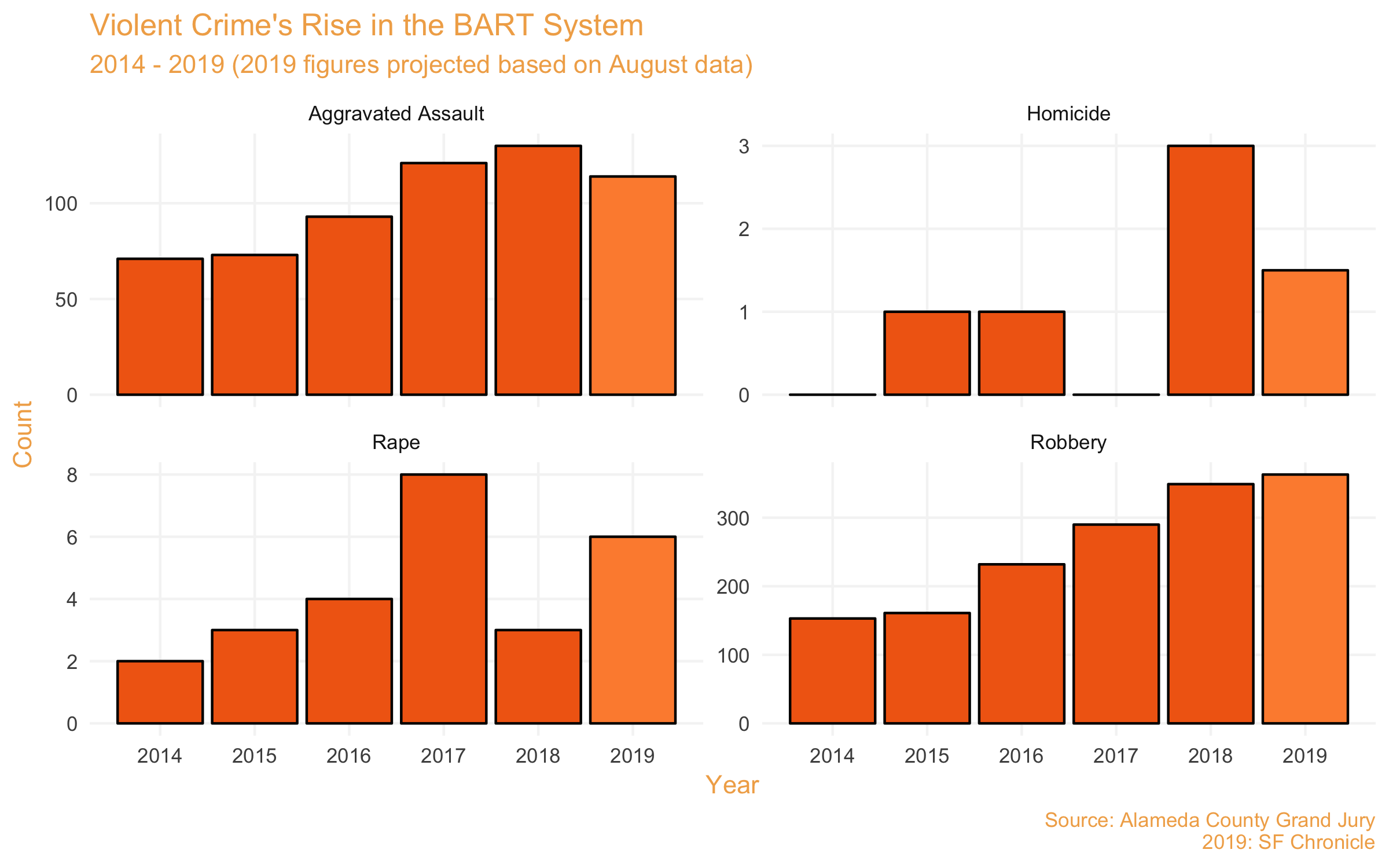 The grand jury connected rising crime to four "interrelated quality of life issues" in the BART system: homelessness, cleanliness, fare evasion, and "security and perception of safety." These factors reflect broader challenges for the city, which struggles with one of the nation's largest homeless populations and a prolific waste-management problem.

The grand jury found that these factors were directly related to riders' satisfaction with the BART system, which has declined by 28 percentage points since 2012. It also found that "BART's police department staffing has been insufficient to meet crime levels."

"BART must increase police patrol officer staffing over the next five years to make the entire BART system safer," the grand jury report recommended, adding that "BART should continue the enforcement crackdown on fare evaders and improve its overall process for handling the collection of fare evasion fines."

In spite of these concerns, San Francisco looks likely to become less, rather than more, tough on crime. Incoming SF district attorney Chesa Boudin has promised to not prosecute quality of life offenses, including "public camping, offering or soliciting sex, public urination, and blocking a sidewalk," indicating instead that he will focus on police misconduct and corporate malfeasance. Reached for comment by the Free Beacon, Boudin said that rising BART crime "reflect[s] systemic failures to address the root causes of crimes."

"Whether it's mental health, substance use treatment or access to health care, we must help people get the services they need before they commit crimes," he said. "While San Francisco's homicide rate is at a near 50 year low as a result of recent justice reforms, we must continue to do better. I'm committed to collaborating with local leaders in the cities that BART serves to address the root causes of the crime."

Kerry Jackson, a fellow at the Pacific Research Institute, told the Free Beacon that he thought Boudin's plan to not prosecute quality of life crimes "sends the wrong message." Jackson linked the crime decline to the rise in fare evasion, and a lack of response to it.

"When you don't crack down on [fare evasion], you tend to encourage more crime," Jackson said. "It's the broken windows theory at work. When the system ran what it called a ‘blitz' against the cheats earlier this year, police calls were cut in half."

Less violent than BART, but still troubling, is the recent trend in the New York City subway system. While, as outgoing NYPD commissioner James O'Neill noted in a New York Post editorial, "serious" crimes have declined, misdemeanor offenses have risen conspicuously over the past year. 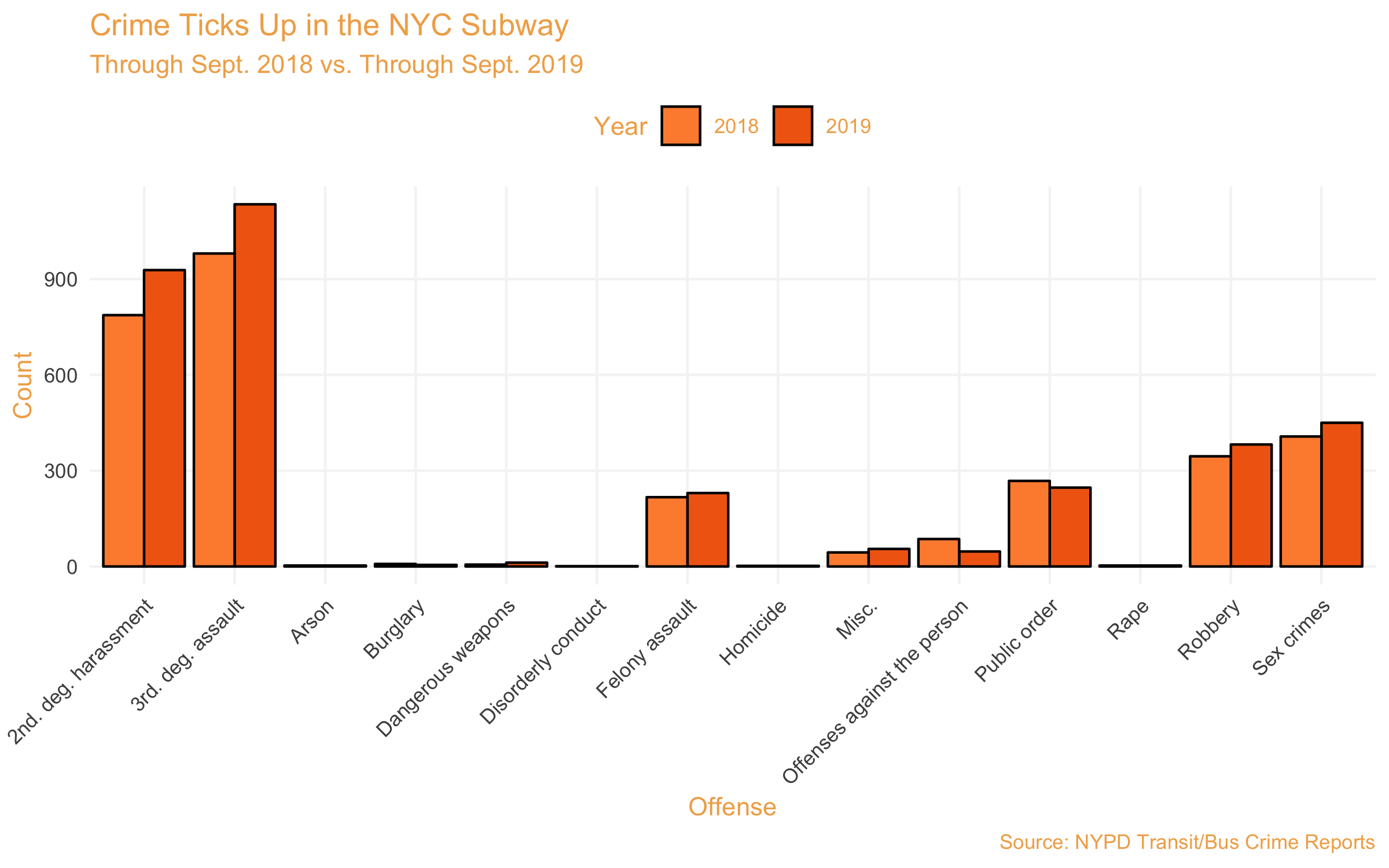 In particular, NYPD data indicate that harassment, misdemeanor assault, robbery, and sex crimes all rose in the first nine months of 2019 compared to the first nine months of 2018. As the Post noted in its own analysis of the data, misdemeanor complaints have risen 23 percent over the past five years—as one rider told the paper, "subway crime and assaults feel like an hourly event."

Certain major crimes have also seen slight upticks—for example, the system saw three rapes and two homicides in the first nine months of 2019, compared with two of each in all of 2018. These increases may represent random variations in rates that have declined steadily since New York's crime-fighting revolution began in the 1990s, when the city experienced 26 subway murders in one year.

Rafael Mangual, a legal policy expert at the NYC-based Manhattan Institute, said "it's too soon to tell" what's driving the increase, but emphasized that these upticks should be understood as a warning.

"We should see these trends as one would see a wheezing canary in a coal mine," Mangual told the Free Beacon, "which is to say as a warning that forgetting (or rejecting) the lessons learned during Commissioner [Bill] Bratton's successful tenure in New York—which began in the subways—will undermine and erode the important crime-fighting gains this city has made since then."

Just as in San Francisco, Mangual suggested that there may be a link between city policies on criminal justice and the rise in petty crime, in particular fare evasion. He pointed to the decision by Manhattan D.A. Cyrus Vance and Brooklyn D.A. Eric Gonzalez to stop prosecuting fare evasion, which he suggested may have caused more lax enforcement and therefore more criminals in the subway system. Neither Vance nor Gonzalez's offices responded to a request for comment.

Others blame Mayor Bill De Blasio, who has worked to shift transit police to a "neighborhood policing model." De Blasio's office did not respond to a request for comment.

"The mayor has handcuffed the police in enforcing the quality-of-life crimes that we should enforce, and these guys know it now," one anonymous police source told the New York Post.

If certain recent events are any indication, the progressive prosecution strategies adopted by Boudin, Vance, and Gonzalez are becoming mainstream in the Democratic Party. Representative Ayanna Pressley (D., Mass.) recently introduced a resolution endorsing, among other proposals, the decriminalization of prostitution, public drug use, and other "quality of life" crimes. On the other end of the Democratic spectrum, 2020 contender Michael Bloomberg publicly apologized for supporting "stop and frisk," indicating that even the notoriously tough-on-crime former mayor has moved left on criminal justice.