America's long-running crime decline appears to have come to a halt, a new report from the Bureau of Justice Statistics indicates.

For nearly three decades, federal crime tracking databases have shown a precipitous drop in violent crime. This "Great American Crime Decline" is one of the most important social phenomena of the 21st century, with analysts connecting it to everything from rising incarceration and better policing to declines of lead in the atmosphere. 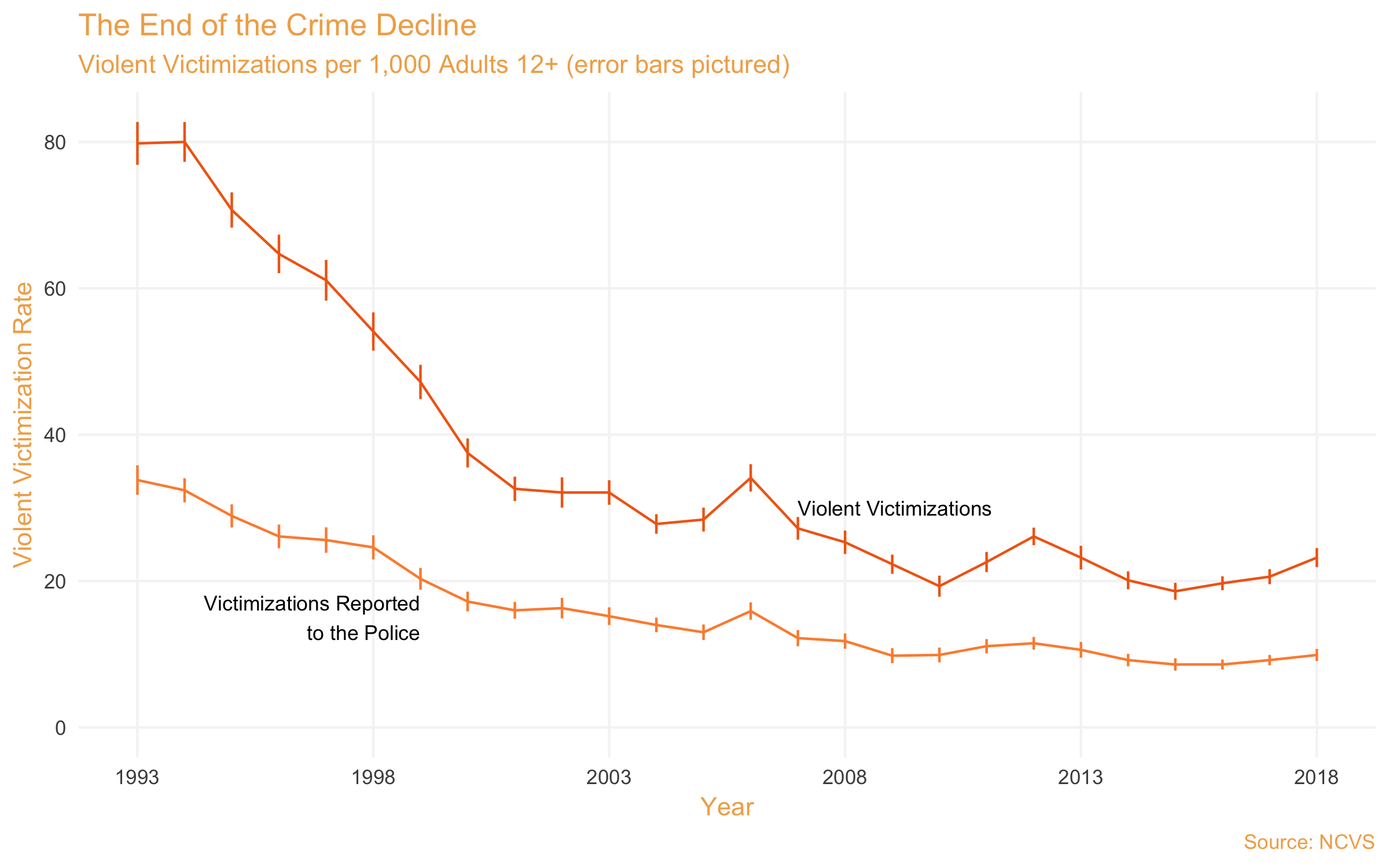 The 2018 National Crime Victimization Survey (NCVS), an annual survey of Americans that tracks the frequency with which respondents are the victims of a crime, found that the "longstanding general trend of declining violent crime in the United States, which began in the 1990s, has reversed direction in recent years."

This inversion is slight. In 2018, there were about 23.2 violent crimes per 1,000 Americans over age 12. That’s more than the 20.6 violent crime rate in 2017 but, according to the NCVS, is within the range of error such that the increase is not statistically significant. Those findings, however, represent a statistically significant increase when compared to survey findings between 2014 and 2016.

The NCVS and the FBI's uniform crime reporting system (UCR) are the two most comprehensive sources tracking how much crime is committed in America each year. The UCR has also documented shifts in criminal behavior in recent years, but with slightly different results. While violent crime as measured by the UCR actually fell in 2017, the murder rate rose. That decline was about as small as the increases tracked by the NCVS.

The best way to understand the new data, then, might not be that the violent crime rate has "reversed direction," but that it has found a new equilibrium—one lower than crime's peak in the early 1990s, but notably higher than the lows of the 1960s.

Still, it is worth asking: What drove 2018's increase in violent crime? According to the new NCVS, rates of aggravated and simple assault contributed some, but the major driver was a huge spike in reported incidences of rape. The survey identified more than 700,000 rape victimizations in 2018, nearly double the 400,000 it identified in 2017. The per-1,000-people rape victimization rate rose from 1.4 to 2.7.

The report does not explain what is behind this precipitous increase in the rape rate. It is possible that it represents some fluke of the survey's sampling method, or an increased willingness of women to report rape.

"On the one hand, an increase of this magnitude automatically raises some red flags. Crime isn't often something given to huge one-year jumps, especially with levels as high as they are," criminologist John Pfaff wrote on Twitter. "On the other hand, don't want to dismiss this too quickly. If real, it's serious."

At the same time, there are important demographic disparities among those who said they were crime victims. Rates rose for White and Asian Americans but fell for Black and Hispanic Americans—though only the Asian population reported a statistically significant increase. There was also a non-significant increase for citizens, and decrease for non-citizens.

The new report emphasizes the unfortunate reality that many crimes are simply never reported to the police. Only 43 percent of the violent victimizations identified in the 2018 NCVS were ever reported, a figure essentially unchanged from 2017. Of those crimes that are reported, only about 45 percent lead to an arrest—meaning that only a fraction of violent crime ever ends up in the criminal justice system.