The average American woman can expect to have fewer kids today than at any point in at least the last half century, new data released Wednesday by the Centers for Disease Control and Prevention show.

This fertility decline, ongoing for more than ten years now, is indicative of not only the aftershocks of the Great Recession but also of a seismic shift in how Americans think about marriage and family.

To account for this, demographers use something called the "total fertility rate," a sort of age-adjusted birth rate that indicates how many kids the average woman can expect to have over her lifetime, given prevailing trends in age-dependent childbearing. In 2018, that figure fell to 1.728 lifetime births per woman, a 2 percent drop from 2017. 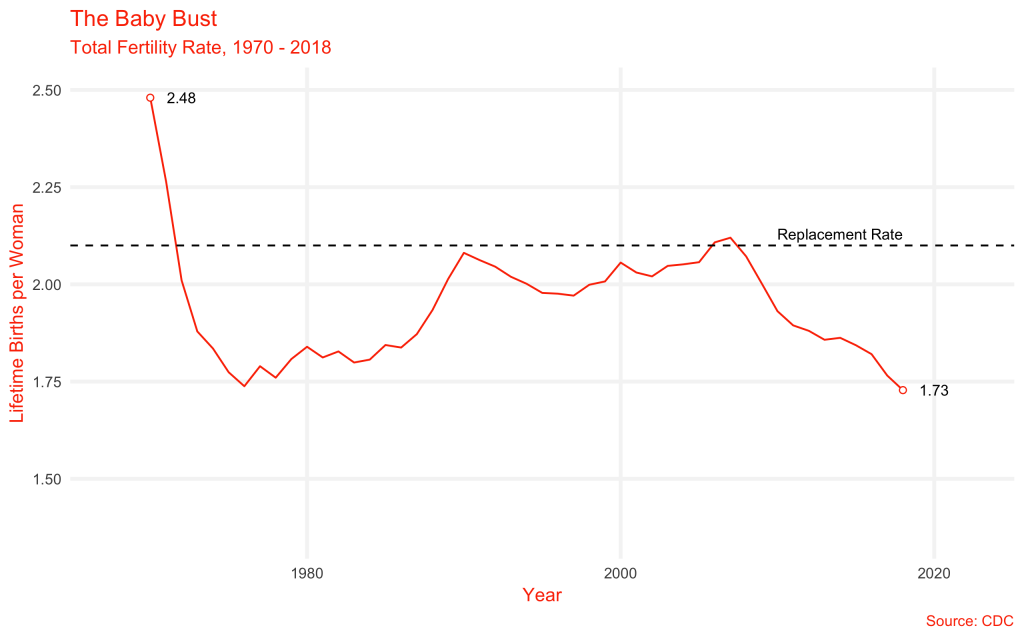 Although women have fewer babies today than they did 50 years ago, there has not been an uninterrupted decline. As recently as 2007, TFR was above the "replacement rate," the number of children each woman needs to have to replace herself and her husband in the next generation. This number is usually pegged at 2.1—for two parents plus accounting for child mortality—in the developed world. In 2007, women could expect 2.12 babies over their lifetime on average.

Then came the Great Recession, and with it economic hardship, uncertainty, and consequently lower fertility. However, while the economy has rebounded from the bust, fertility has not. America is seeing a baby-less recovery, a phenomenon which may reveal deeper tensions in 21st-century family life merely brought to the surface by the recession.

Even before 2007, for example, women were shifting to have kids later and later. From the 1970s through the early 1980s, the most kids were born to women in their early 20s; even after, the modal mom was 25- to 29-years old. But the share of women giving birth in their thirties has crept up steadily over the past four decades, and in 2016 30- to 34-year-olds overtook younger moms to become the dominant strain. 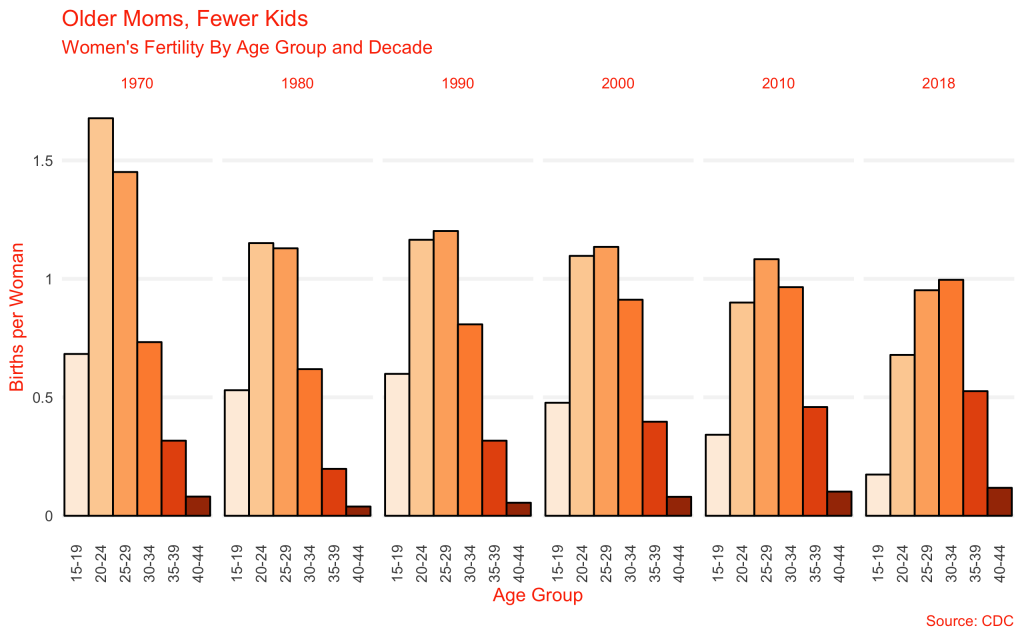 The obverse of this is that births to teen moms are becoming less and less frequent—a product not of abortion rates, but of greater contraceptive use and many teens waiting to have sex until after high school. Unintended pregnancies are also becoming less common: A recent paper found that "35% of the decline in fertility between 2007 and 2016 can be explained by declines in births that were likely unintended, and that this is driven by drops in births to young women."

This change in mom demography—fewer teens, more 30- and 40-year-olds—is itself reflective of both post-recession realities and longer-term trends in the American family. Perhaps the most significant part of this story is marriage: Americans are marrying later and later. The share of out-of-wedlock births has gone up, but not enough to make up for the fact that marriage is still the best route to sex and, consequently, procreation. In fact, one analysis estimated that 50 percent of the fertility drop could be explained by the decline in marriage.

Another factor weighing heavily on the minds of parents is cost. Although the relationship between money and fertility is complicated, soaring childcare and housing expenses put would-be parents under enormous pressure (especially if they are younger). One survey from last year found that the cost of childcare was the leading reason why parents plan to have fewer children than they want, and the third most popular reason why young adults do not have kids at all.

While money is almost certainly a factor, so too are attitudes about marriage and childbearing. Millennials, now solidly into adulthood, seem increasingly picky about whom they marry, the result being both less divorce and less marriage. The drop in unintended births reflects similar trends—what demographer Lyman Stone identified as a cultural shift "away from risk-taking-ness towards caution and prudence."

Some of this shift is doubtless itself a function of economics; the generation that entered the job market after the Great Recession is almost certainly more wary of the cost of a kid than their parents were. But it is likely also self-reinforcing, as cultural representation and norms of family life encourage later and later childbearing.

Regardless of why, one thing is clear: Americans keep having fewer and fewer kids. When, and whether, this trend will abate is anybody's guess.