State Department Predicts Release of Clinton Emails Concerning TPP on November 31, Which Is Not a Real Date

The State Department has stated it would likely release correspondence concerning Hillary Clinton's participation in the formation of the Trans-Pacific Partnership trade deal on Nov. 31, 2016, which is not a real date.

November only has 30 days.

CNN host Jake Tapper during a report for The Lead on Monday laid out the saga of International Business Times reporter David Sirota's efforts to learn more about Clinton's role in the TPP with a Freedom of Information Act request. Although she promoted it constantly at the State Department, she came out against it as a Democratic presidential candidate. Republican Donald Trump and Democratic primary challenger Sen. Bernie Sanders (I., Vt.) have also criticized the agreement.

State Department official Charlotte Duckett informed Sirota last November that the search of records had been initiated within the Department's Office of the Secretary, with an estimated completion date of April 2016. However, meeting that deadline did not come to fruition.

As Sirota reported, the agency said it had finished the request but was delaying release until after the presidential election:

Last week the agency said it had completed the search process for the correspondence but also said it was delaying the completion of the request until late November 2016 — weeks after the presidential election. The delay was issued in the same week the Obama administration filed a court motion to try to kill a lawsuit aimed at forcing the federal government to more quickly comply with open records requests for Clinton-era State Department documents.

Clinton’s shifting positions on the TPP have been a source of controversy during the campaign: Sherepeatedly promoted the deal as secretary of state but then in 2015 said, "I did not work on TPP," even though some leaked State Department cables show that her agency was involved in diplomatic discussions about the pact. Under pressure from her Democratic primary opponent, Bernie Sanders, Clinton announced in October that she now opposes the deal — and has disputed that she ever fully backed it in the first place.

The email read, "the new estimated completion date for your request is November 31, 2016." Although news outlets focused on this as not meeting transparency standards by coming more than three weeks after Election Day, it seemed to escape the media's attention that the State Department had written a date that doesn't exist. 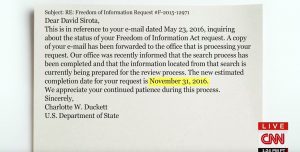