Oh wait, those are Democrats

More "moderate" Democrats at the primary debate Tuesday attacked the liberal frontrunners at center stage for wanting to eliminate private health insurance for half the country.

Sens. Bernie Sanders (I., Vt.) and Elizabeth Warren (D., Mass.) both endorse a vision of Medicare for All that does away with private health care plans. MSNBC's Steve Kornacki reported Tuesday night that the sweeping health care proposal is one of several left-wing plans unpopular with a majority of Americans.

Other candidates on the stage tried to make that point on Tuesday, including former Rep. John Delaney (D., Md.), who accused Sanders and Warren of not understanding the health care business.

"We don't have to go around and be the party of subtraction," said Delaney, who had tense sparring sessions with Sanders and Warren throughout the debate. "They're running on telling half the country that your health insurance is illegal. It says it right in the bill."

Former Colorado governor John Hickenlooper (D.) said the policy of taking away private insurance from "180 million Americans" was tantamount to gift-wrapping the election for Trump.

Montana governor Steve Bullock (D.) used a slightly different number, calling for a public option that wouldn't result in "disrupting the lives of 160 million people" who prefer their employer-sponsored insurance.

"At the end of the day, I'm not going to support any plan that rips away quality health care from individuals," Bullock said. "This is an example of wishlist economics."

"Do I think that we are going to end up voting for a plan that kicks half of America off of their current insurance in four years? No, I don't think we're going to do that," Sen. Amy Klobuchar (D., Minn.) said.

Rep. Tim Ryan (D., Ohio) has centered his campaign around working-man credentials and chastised Medicare for All for taking away health care plans cherished by union members.

Ryan told MSNBC after the debate that such proposals could lead to a landslide victory for President Donald Trump in 2020.

"In this discussion already tonight, we've talked about taking private health insurance away from union members in the industrial Midwest," he said. "We've talked about decriminalizing the border, and we've talked about giving free health care to undocumented workers when so many Americans are struggling to pay for their health care. I, quite frankly, do not think that is an agenda that we can move forward on and win."

Warren and Sanders didn't take kindly to the attacks on their plans, engaging in several heated arguments with their lower-polling challengers. They portrayed their opponents as afraid to battle for progressive goals.

"You know, I don't understand why anybody goes to all the trouble of running for president of the United States just to talk about what we really can't do and shouldn't fight for," Warren said to Delaney. 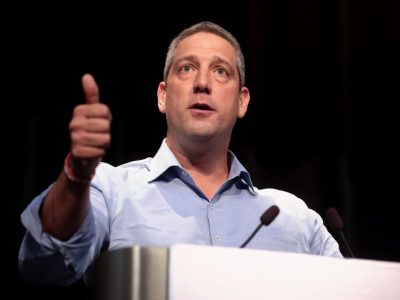