The American birth rate tied its historical low in the first nine months of 2018, new data from the Centers for Disease Control shows, and demographers say it will likely go lower.

The United States has been in the midst of a baby bust for decades. The total fertility rate—a demographic measure which estimates how many children a woman can expect to have in her lifetime—has consistently been below the requisite 2.1 children per woman required to sustain the population at current levels. Americans are having fewer kids, and the number they are having is steadily declining.

Specifically, the latest CDC data indicate that as of September of 2018, an average American woman can expect to have about 1.73 children in her lifetime. That rate is effectively tied with the rate 42 years ago, the lowest on record. 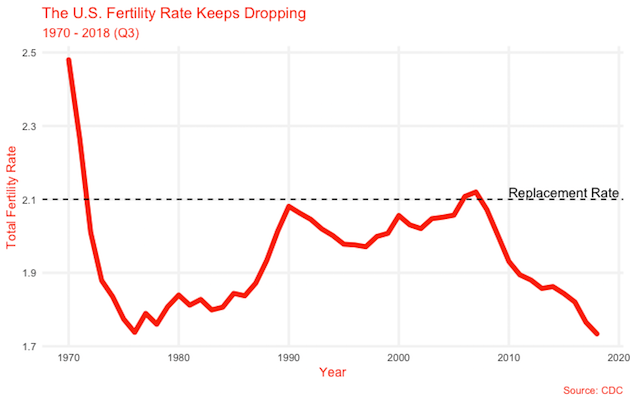 Fertility forecasting firm Demographic Intelligence, in an analysis shared exclusively with the Washington Free Beacon, estimates that TFR fell to 1.72 by the end of 2018. That would be the lowest rate in U.S. history, according to DI.

While at historic lows already, the rate may go lower still. Demographic Intelligence noted that birth rates are falling in spite of the large cohort of millennial women who are currently in their fertility prime. As that group ages into menopause over the next decade, the birth rate will likely decline even further.

Why, exactly, is fertility dropping? Like most social phenomena, there is no one cause. Rather, a bevy of changes in society over the past 10 to 40 years have conspired to push the TFR down.

One of the simplest available explanations is the Great Recession. After vacillating for much of the 1990s and early 2000s, the TFR had inched above replacement just before the housing bubble burst. From there, however, it plunged, as couples grew warier of taking on the financial burden of child rearing.

However, even as the economy has recovered, fertility has continued to fall. Lyman Stone, an economist and adviser to Demographic Intelligence, told the Free Beacon that that is because of deeper changes, both in the economy and in culture as a whole.

This helps to explain why two of the only groups seeing a fertility increase are women over 35 and women with at least a college education who are having a second child. The increasingly high costs of being a young adult—student debt, housing costs, and the enormous cost of childcare, for example—mean that today's 20-somethings are opting to have fewer kids than their parents did at their age. Older Americans are picking up the slack—but not nearly by enough. 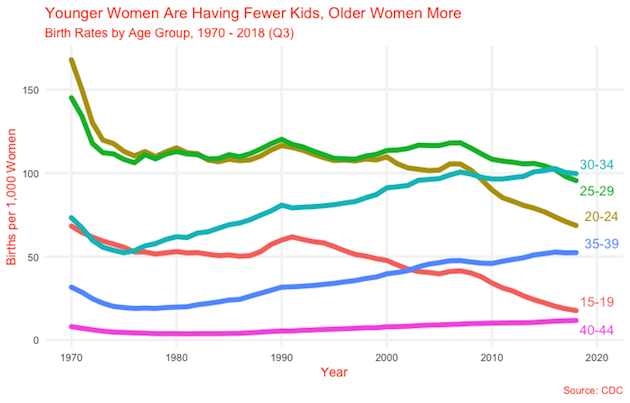 Stone was quick to note that the bigger picture does not necessarily show women are simply delaying childrearing. Fertility dropped over the 12 months prior to the CDC's release for all women under 35, and fertility for women 35 to 44 dropped slightly over the past six months of the same time period—in other words, older women are having fewer kids too.

"This is not a story of delay, but of decline," Stone emphasized.

This ties naturally into a broader cultural transition around childbearing, which Stone characterized as "the shift in American culture away from risk-taking-ness towards caution and prudence."

Today's young people are less likely to engage in a whole bevy of risk-prone behavior than their predecessors. They go on fewer dates and have less sex; they consume drugs, cigarettes, and alcohol less frequently; they even drive less. All of these changes are probably good in themselves, because they mean America's teens are exiting adolescence having avoided any of a number of associated pathologies.

But, at the same time, they also mean that those same young people are adopting a more and more risk-averse model when it comes to starting their families. This explains, for example, why millennials are driving down the divorce rate: as sociologist Phillip Cohen has argued, that generation has begun to think about marriage and family formation as something which one does only after one is financially stable, rather than in order to become stable.

This trend necessarily has an effect on reproduction. A recent economic analysis estimated that 35 percent of the decline in fertility is driven by a decline in "unintended" births, primarily among young women. In other words, much pre-recession natality was driven by children who were unexpected, and the decline is driven by younger women taking steps to insure against that possibility.

"Young people today are more cautious about who they marry, more hesitant to make large purchases, want a bigger financial cushion before becoming a parent, expect stable career employment and paid off loans and other financial milestones before they settle down and start a family," Stone said.

Analyzing the CDC data, Stone suggested that we should expect to see a "more, rather than less" severe decline, with U.S. TFR more likely to settle somewhere between one and 1.5— the current level of some Asian, southern and eastern European, and Latin American countries.

It is not clear how much policy can do to alter this course. Proposals like expanding federal subsidies for children have been popular on the left and right, although they would likely do more to alleviate poverty than improve fertility. Reducing the financial burden on young adults—working to reduce student loan debt (for which the federal government is the major creditor), or making housing cheaper through zoning reform—could also help ease the transition into parenthood.

If the fundamental problem is cultural, then policy can only have so much of an effect. The fertility drop is both caused by, and a precipitating factor in, the broader crisis of social capital. as Americans have fewer connections on whom to depend, it becomes harder to informally socialize the burden of childcare; and, simultaneously, a lack of children means fewer people who will eventually grow up to take their turn to care for the previous generation.

"If Americans don't individually believe having kids is valuable, important, and possible, the state isn't going to be able to convince them," Stone said.