Universities across the country have embraced online-only classes or "hybrid" learning models in response to the pandemic. Those restrictions, a Washington Free Beacon review of voter registration data found, have likely dealt a blow to Democrats in some of the most competitive election races in the country. New voter registrations in the vicinity of seven major public universities in Wisconsin, Michigan, Ohio, and North Carolina have plummeted compared with 2016.

The locked-down college campus, in other words, could help determine the 2020 election, as thousands of students either vote from their home states or do not register at all. That could be a setback for Democratic contender Joe Biden, and for Democrats down-ballot, given the party's overwhelming popularity with America's most liberal and least politically engaged age group. 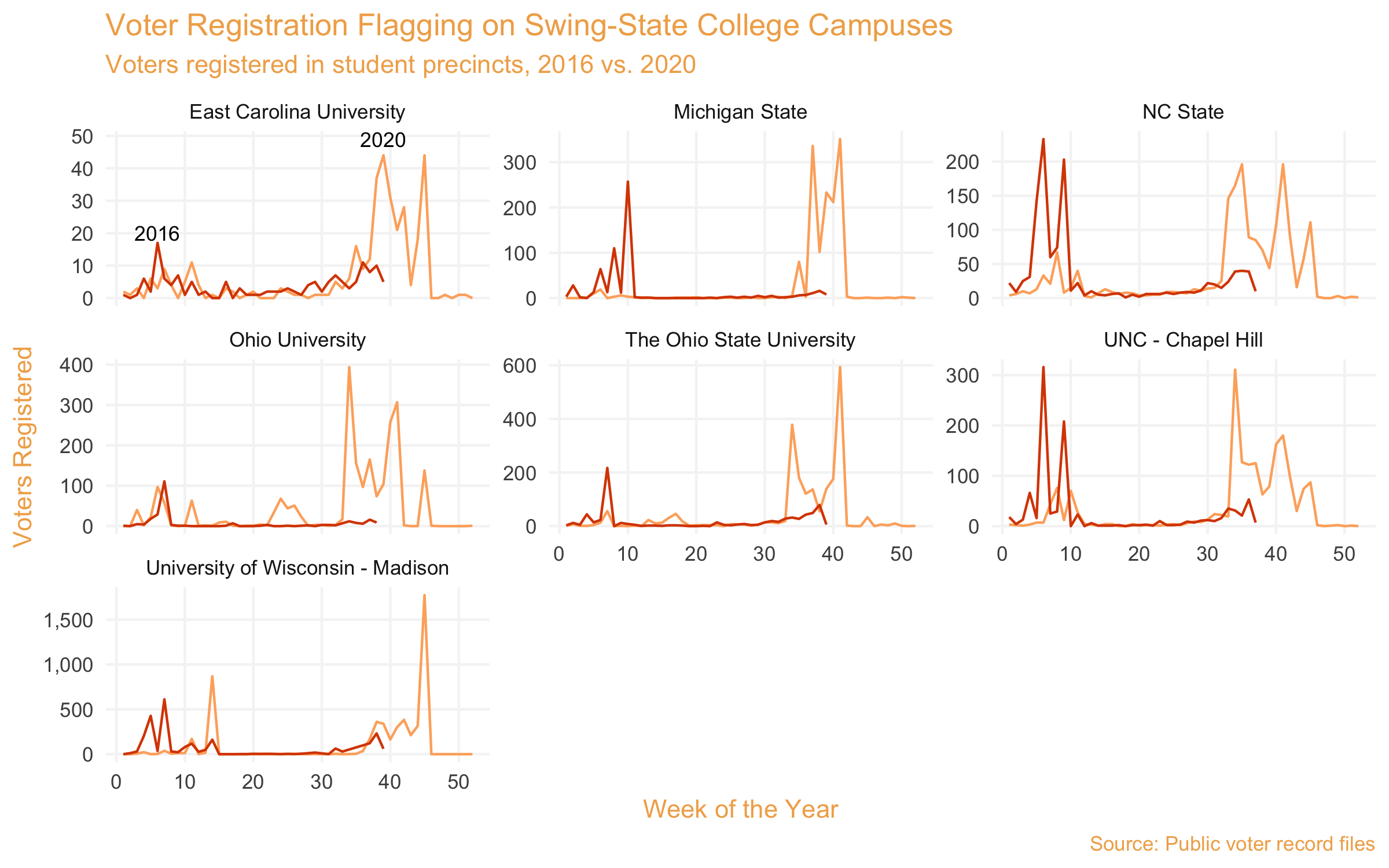 Official data show that voter registrations have plummeted across seven large public universities that boast a cumulative population of more than 270,000 voting-age students in four swing states. In 2016, the fall leading up to the November election was a key time for voter sign-ups, with the seven colleges averaging 100 to 200 new registrations every week following the resumption of fall classes. One, the University of Wisconsin Madison, saw more than 1,700 new registrations in the first week of October alone.

What was once a river has become a trickle with average weekly registrations dropping below 40 on campuses. In the weeks since the start of the semester, cumulative registrations fell 94 percent at Ohio University and 93 percent at Michigan State University.

Voter enthusiasm was high at many of the same schools prior to pandemic shutdowns. The early spring saw registration figures that matched or outpaced 2016—suggesting that were it not for the pandemic and ensuing restrictions, campuses would have proved a ripe source of voters yet again.

To reach these conclusions, the Free Beacon analyzed publicly available voter registration data. College students were identified based on their precinct of registration, which was either determined based on proximity to campus or from information published by the universities themselves. Though this approach offers imperfect identification, it affords a reasonable proxy for comparing 2020's trends with the 2016 election. 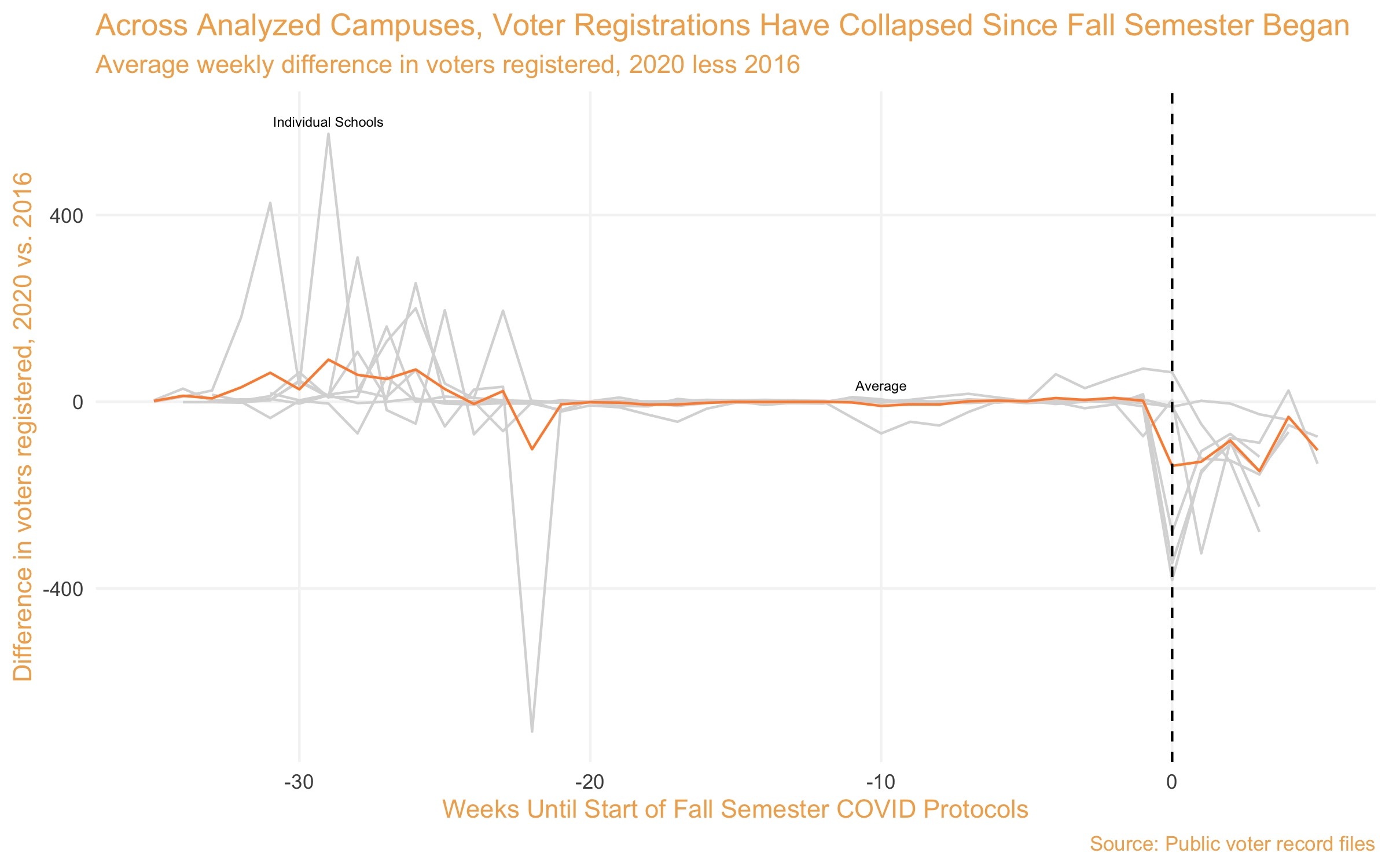 The seven colleges for which the Free Beacon obtained data have responded to the pandemic differently. Some, like the University of North Carolina Chapel Hill, have gone entirely remote, while others, like Ohio State University, have adapted a partially in-person, partially online "hybrid" model. In all cases, however, the start of these measures—whether at the start of the semester or when schools officially went remote—coincided with a conspicuous drop in weekly registrations, compared with the same week in 2016.

Campus political activists have felt the phenomenon as they work to turn out the roughly 6 in 10 college students who do not vote. One College Democrats president and two College Republicans board members confirmed to the Free Beacon that their respective groups have struggled with on-campus registration since the start of the semester.

"It is sad to see that we cannot encourage people to go vote by literally handing them a registration form and watching them fill it out, but we do have social media on our side," she said.

The collapse of campus registrations could prove a major challenge to Biden, whose path to the White House likely runs through at least a few of the four states. Trump defeated Hillary Clinton thanks in particular to narrow victories in Wisconsin and Michigan, where he won by 23,000 and 11,000 votes, respectively. By comparison, more than 5,000 University of Wisconsin students and more than 1,300 Michigan State students registered by the end of 2016; less than half as many have registered so far this year, which could set Biden further back in states he needs desperately to win.

The decline in registrations could hurt Biden and Democrats more generally because theirs is the party with which young people and the college-educated are overwhelmingly more likely to affiliate. In the 2018 midterms, for example, 18- to 29-year-olds broke for Democrats by a 49-percentage-point margin, while college grads generally favored them by a 17-point advantage.

Similarly at risk is Rep. Elissa Slotkin (D., Mich.), whose district is home to Michigan State University. Slotkin, a freshman Democrat, is seen as a rising star in her party but faces a serious challenge in a district that went for Trump by 7 percentage points in 2016. That tension was apparent late last year when Slotkin attracted ire from her constituents for saying she would vote for the House's impeachment of Trump.

Jack Harrison, communications director for the Michigan State College Republicans, told the Free Beacon there is still plenty of energy for Republicans in the district, and he predicts high turnout in spite of the restrictions.

College shutdowns may have already helped shape the 2020 election cycle. A progressive candidate for Ohio's Third Congressional District—home to Ohio State University—blamed the university's decision to cancel in-person classes for her campaign's ultimate defeat. Candidate Morgan Harper, who lost by more than 21,000 votes, said campus shutdowns were a form of voter suppression.