Barack Obama may have just announced a troop surge in Iraq following a devastating loss in the midterms, but he is nothing like George W. Bush. That’s why his administration has made clear that the United States does not torture its enemies. But what about its friends?

Consider this passage from an illuminating (and frightening) profile of senior Obama adviser Valeria Jarrett in the New Republic:

Earlier this year, after House Republicans rejected John Boehner’s overtures on immigration reform, a number of activist groups turned their attention away from Congress and toward the White House. They wanted Obama to sign an executive order protecting illegal immigrants from deportation over the next few years, the way he had back in 2012 for those brought to the country as minors.

The pressure mounted when Janet Murguía, president of the National Council of La Raza, one of the largest and most established Latino rights groups, gave a speech in March calling out both Boehner for having "pulled the plug on legislation" and Obama for denying he had "the authority to act on [his] own." Echoing a line that was circulating on the left, she dubbed Obama "the deporter-in-chief."

A week and a half later, the president and Jarrett summoned representatives from 15 to 20 reform groups to the White House for a meeting. Unlike the gay rights meeting two years earlier, there was no directive about keeping the discussion out of the press. But the activists were later told that the success of the meeting would be judged by the media coverage. "Even if you think that, it was like, ‘Eeeewww,’" says one of the reformers who attended. "I was embarrassed by the meeting."

The president was in a foul mood, spending most of the next two hours lecturing the activists. You guys are turning on me, Obama said, according to several attendees. That’s what Republicans want, you’re taking the pressure off Boehner. If I was a GOP strategist, I’d be thrilled by what you’re doing. When some of the activists pointed out that the situation in the House was hopeless, Obama would interrupt and talk over them. (Administration officials say Boehner had assured them he would take another shot at the legislation.)

Finally, when it was Murguía’s turn to speak, she tried to put her earlier remarks in context. She explained that, while she’d been critical of the administration, she had also criticized Republicans and had urged her community to elect a more amenable Congress. "It took him what felt like ten minutes—it was probably thirty seconds—to compose himself. You could just feel the tension," says one activist in the room. Whereupon Obama fell into an extended monologue: You’ve been around this town. You know the press will only report criticism of me. The La Raza president looked on the edge of tears as he spoke. Meanwhile, "Valerie was sitting next to him, staring, giving Murguía stink eye," says the activist.

Poor Janet Murguía. There is a word for forcing your captives to listen to hours of angry lectures and "extended monologues" while getting stared down by the most powerful and intimidating woman in America. There's a word for trying to break a person's will and bring them to tears in front of you. That word is torture.

If the United States wants to maintain its status as leader of the free world, we need to be better than that. 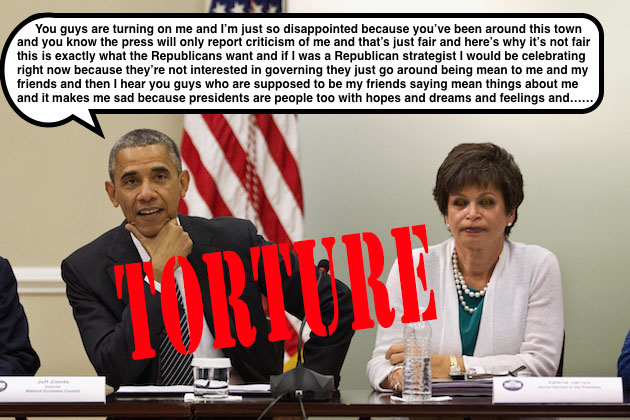