This One Tweet Explains Why Hillary Clinton Will Never Be President

Hillary Clinton will never be president. She might not even win the Democratic nomination. This, week she got her first legitimate challenger in hip-hop icon Waka Flocka Flame, who is making good on his 2012 promise to run for president.

Hillary Clinton probably doesn't know the lyrics to many Waka songs, potentially frustrating her efforts to court youth voters, which, in case you hadn’t noticed, aren’t going so well. Where does she stand on the crucial issue of wearing (pant)suits to meetings, or rolling a fat one?

When given the choice between Hillary and someone who can actually identify with our nation’s youth (Waka), voters overwhelmingly choose the latter. Consider this tweet, which explains why Hillary Clinton will never be president:

Who are you voting for in 2016? RT for Waka Flocka FAV for Hillary Clinton pic.twitter.com/56BNMnVHXp

Here is that same data represented in chart form. It's pretty devastating for Hillary: 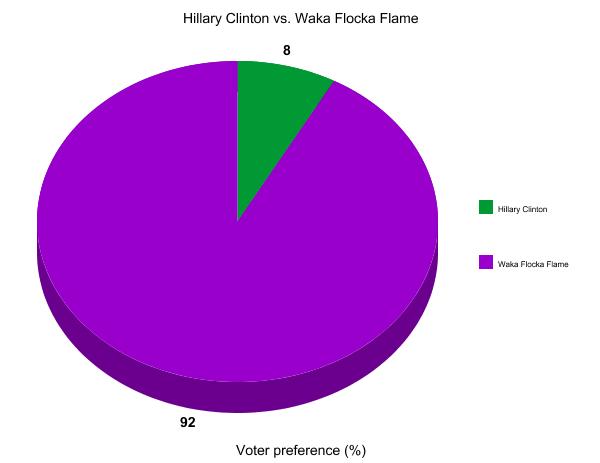 Will Hillary do the honorable thing and bow out of the race? I think we all know the answer.