Hillary Clinton Will Never Be President

Her ship has come in, but has it also sailed? (Yes, it has)

Until recently, the conventional wisdom among Beltway elites was that Hillary Clinton would waltz, or at least walk unassisted, to the Democratic nomination in 2016. Now that narrative has come under attack, amid mounting evidence that Hillary’s most recent quest for power has already failed.

Consider, for example, the embarrassingly sparse crowd at Georgetown University on Wednesday, where Clinton delivered a lecture on "Smart Power: Security Through Inclusive Leadership."

View from balcony as Hillary Clinton speaks at Georgetown Univ. in DC. pic.twitter.com/ckciKemPug

Tickets to Clinton's Georgetown event were offered to all students. School says less interest is byproduct of last week of classes/finals.

This is precisely the demographic Hillary will have to turn out in large numbers to be successful in 2016. Anyone who thinks she can come close to inspiring the same amount of enthusiasm among people as Barack Obama is kidding themselves. In fact, Hillary has been struggling to draw crowds of all ages.

Gov. Deval Patrick (D., Mass.) has said the sense of inevitability surrounding Hillary’s candidacy is "off-putting to voters." The American people view inevitability as a sense of entitlement, Patrick said on Meet The Press, and prefer candidates who make an affirmative case for themselves. "The American people want–and ought to want–their candidates to sweat for the job, to actually make a case for why they are the right person at the right time," he said.

Meanwhile, recent polling suggests Hillary's aura of inevitability is fading. She is only slightly ahead in matchups with potential GOP challengers with much lower name recognition.

Prominent left-wing blogger Ezra Klein thinks Hillary is "not inevitable" because she is too focused on "expansive ambitions of radical jihadists" and "takes a hard line on Iran's nuclear ambitions."

Financial Times columnist Edward Luce recently suggested that Hillary faces a "rickety bridge" to the White House, in part because "Democrats have remarkably little new to say about the future of America’s middle classes." Hillary’s close ties to Wall Street and big corporate donors, Luce argued, will likely hinder her ability to "ignite the passion" of liberal voters, potentially paving the way for a populist challenger such as Elizabeth Warren.

Hollywood has taken notice. Acting juggernaut Mark Ruffalo, star of 13 Going on 30, recently tweeted his support for Warren. The momentum may prove unstoppable.

The Washington Post, among others, is beginning to wonder if Hillary will even run at all. The fear of losing, for example, may preclude her from running. Just think how embarrassing that would be. She’s not as popular as she used to be. She’s also considerably older than she was in 2008. Even Bill Clinton has acknowledged that his wife’s heath is a "serious issue."

The New Republic’s Alec MacGillis poses a compelling question: If Hillary is truly preparing to run in 2016, why is she still giving so many highly paid speeches?

Good @NBCFirstRead q: "If she is truly eyeing 2016, as we believe she is, why is Hillary still giving paid speeches?" http://t.co/ECxrVuFTZB

The obvious answer is that Hillary firmly rejects the Obama adage that "at a certain point, you've made enough money." Considering that she has barely tried to hide her voracious greed since quitting her job at the State Department, it's perfectly reasonable to conclude that she will choose to continue making millions of dollars rather than run for president. After all, being leader of the free world pays just $400,000 a year. On the public speaking circuit, Hillary can make that much in less than a hour.

The evidence, as presented, is overwhelming: Hillary Clinton will never be president. 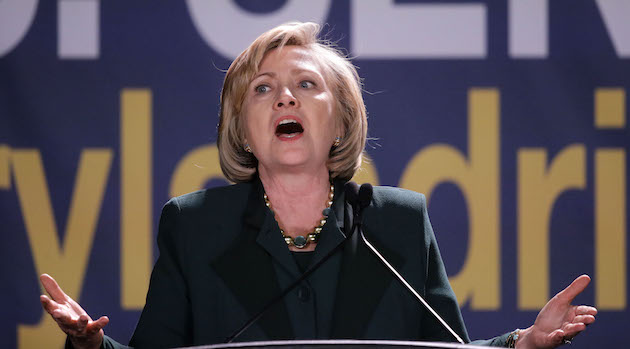