New Republic owner (and Free Beacon Couple of the Year co-winner) Chris Hughes has a problem. Not only did his husband Sean Eldridge recently lose his race for Congress by an embarrassing margin, Hughes also needs to replace the dozens of New Republic staffers who resigned in protest over his plans to transform the magazine into a "digital media company." (But first he needs to update the masthead.)

Fortunately for Hughes, there’s an obvious solution to this problem: hire Charles C. Johnson, the ultimate disrupter in the game of journalism. Many people have opinions about Johnson’s work, which has ranged from disrupting the Republican Senate primary in Mississippi to streamlining journalistic engagement during the Ebola crisis, but there is no question that he shares New Republic CEO Guy Vidra’s "dedication to informing society and impacting the world through analysis and insight," as well as "breaking s—t."

As Vidra wrote Tuesday in an open letter to readers: "The New Republic has always been a place where contrarian views were embraced and ideas with impact flourished." Hiring Johnson would be an easy way to prove the digital company’s commitment to maintaining this venerable tradition.

Like many in the burgeoning tech community, Johnson exudes a contrarian and anti-establishment worldview that makes him a perfect fit for the New Republic. Chuck Johnson is like Uber, but for journalism. The elite media gatekeepers (like taxi companies) can’t stand it, because he keeps disrupting the hell out of their shit, and refuses to play by their rules.

Every time someone calls @ChuckCJohnson a "journalist," the profession of journalism dies a little bit more.

.@ChuckCJohnson is why we need to bring back the news media gatekeepers. He's a cartoon satire of everything that's wrong with the internet.

I don't regard the Columbia Journalism School as the final word on journalism or even the first. — Charles C. Johnson (@ChuckCJohnson) December 8, 2014

Exactly. Chris Hughes didn't need to go to journalism school to learn how to buy a magazine. If he wants the New Republic to be a disruptive player in the National Conversation for years to come, he could start by hiring Charles C. Johnson. If anything, it beats the alternative: 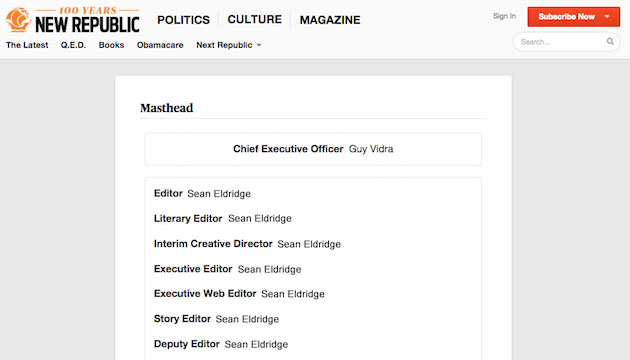