It is the year 2015, and this is an actual headline from one of the most respected institutions in the field of journalism—the Associated Press—for its story on Hillary Clinton’s paid speech to a group of female tech executives in California: 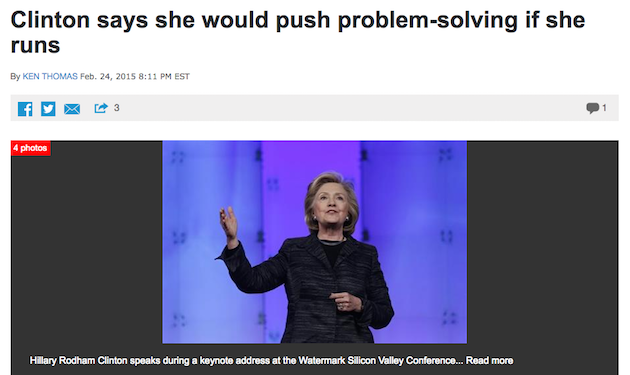 Amazing. Hillary Clinton, who is obviously running for president even though we’re still not allowed to say it, is going to shatter or perhaps even #disrupt the political status quo by promoting an agenda based on the revolutionary notion that problems exist and should be solved. An alternative headline might be: "Person running for president promises to say what every other person to run for president has said." The AP devoted 800 words to the 'news" of how Hillary 5.0 plans to run for motivational speaker-in-chief. Here’s the lead:

SANTA CLARA, Calif. (AP) — Hillary Rodham Clinton said Tuesday that if she decides to seek the White House again she would try to bring Republicans from red states and Democrats in blue states into a "nice, warm, purple space" that would encourage problem-solving.

Leave aside, for a moment, the fact that the same person promising to transcend partisanship with magical purple goo can’t even get her closest aides to get along, even though her campaign hasn’t started yet. This sort of coverage says more about the press than it does about Hillary, who not only received free publicity to push a carefully crafted message from a safe venue, she also took home about $300,000 for her troubles. (Individual tickets to the event sold for $245.) Not a bad deal, especially for a politician who seems determined to run for president without having to actually campaign. It's been weeks since Hillary answered questions from actual reporters, and POLITICO reports that she might decline to participate in any Democratic primary debates.

The AP story, as far as I can tell, is not some sort of tongue-in-cheek commentary on this dynamic, which has, for example, produced numerous stories on the fact that Hillary will (sorry, might) talk about the fact that she is a woman and recently became a grandmother. But I can't be sure, because a few hours after the story posted, AP updated the headline to make it even more ridiculous: 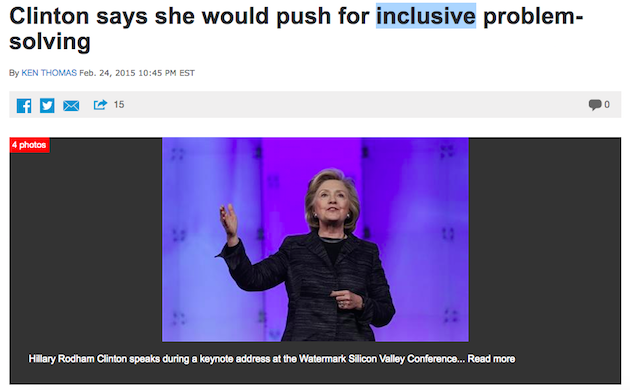 Glad we got that cleared up. One seriously wonders if the change was the result of some Clinton aides berating some poor AP editor over the lack of bullshit corporate jargony buzzwords in the original headline. The AP Twitter account put its own spin on it:

Clinton says she would push bipartisan problem-solving if she runs, by @kthomasDC http://t.co/g2i0BU3U40

Clinton must know perfectly well at this point that all she has to do is say or tweet a collection of meaningless words, always at a time and manner of her choosing, and the media will breathlessly report it. She rakes in cash giving speeches, and the toughest questions she has to face are of the "Blackberry or iPhone?" variety. Meanwhile, Republican candidates are getting asked all sorts of questions about evolutionary theory and a former mayor's comments about a lame-duck president and whether or not said lame-duck president believes in the tenets of Christianity. What difference, at this point, does it make if Hillary ever formally campaigns for the White House at all? We already know that she’s a woman, and is in favor of problem solving. What more do voters need to know?