The updated version is considerably less catchy, and unlikely to be recommended by political strategists: 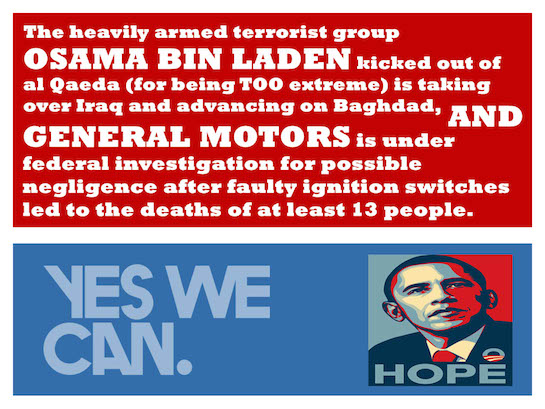 After President Obama won reelection in 2012, the U.S. government sold its remaining stake in General Motors, acquired as part of the 2009 auto bailout. Taxpayers netted a $10.5 billion loss on the deal, or about 20 percent of the government’s $49.5 billion investment. The sale took place several months before federal prosecutors announced a criminal investigation into GM’s handling of a vehicle flaw that resulted in a series of deaths. Oh, and the city of Detroit is officially bankrupt.

Meanwhile, a terrorist group known as the Islamic State of Iraq and the Levant (ISIS), an al Qaeda offshoot that was kicked out for being too violent, has captured several major cities in Iraq, seized a bunch of U.S.-made heavy weapons and other military equipment, stolen more than $400 million from the central bank in Mosul, and is currently marching on Baghdad. Just a few days before all this happened, President Obama insisted that "the world is less violent that it has ever been."

No wonder he's given up on being president.