Russia's invasion of Ukraine was met with a swift and forceful response from American corporations, many of which vowed to halt business operations in the country. Will they respond in similar fashion to the (inevitable) Chinese invasion of Taiwan under President Joe Biden or (God forbid) President Kamala Harris? Probably not. In all likelihood, the response from American corporations will be neither swift nor forceful. It will probably look something like this:

BURBANK — The Walt Disney Company on Monday announced that it "remains opposed to the concept of war, generally speaking, and supports a peaceful yet victorious resolution to the ongoing reunification process in China, a glorious nation with a rich cultural history and a profound appreciation for high-quality entertainment, including the ever-growing range of titles available for streaming or download on Disney+, which offers an unprecedented collection of the world's most beloved movies and TV series in stunning 4K UHD and Dolby Atmos sound on compatible devices."

Disney CEO Bob Chapek said "there are a lot of good arguments for and against what China is alleged to be doing in terms of domestic affairs within its own borders," but declined to characterize the Chinese military operation as a "war" or an "invasion." He repeatedly refused when asked to say the word "Taiwan" or acknowledge the country's right to exist. "No country, including the United States, should ever wage quote-unquote war for illegitimate reasons," Chapek said, adding that Disney+ had no plans to back out of its joint venture with the Chinese Communist Party, tentatively titled "People's Republic of China Glorious Campaign for Kinetic Reunification," and starring some of the most recognizable names in the Disney stable of characters.

BEAVERTON — Nike is teaming up with former NFL quarterback Colin Kaepernick once again as part of the company's forthcoming "Unify" campaign, chief executive John Donahoe announced Monday. "Nike is a brand that is of China and for China," Donahoe said. "We are unified in support of Chinese unity, and I can't think of anyone better than Colin to be the face of this inspiring message."

Kaepernick, who has compared playing in the NFL to chattel slavery, recently spoke at a #StopAsianHate rally in Cambridge, Mass., where dozens gathered to protest after someone painted "China sucks" on the Lamborghini SUV belonging to Harvard student Qian Mingze, daughter of Chinese general Qian Gang, aka "The Butcher of Penghu." The incident was later revealed to have been a hoax. 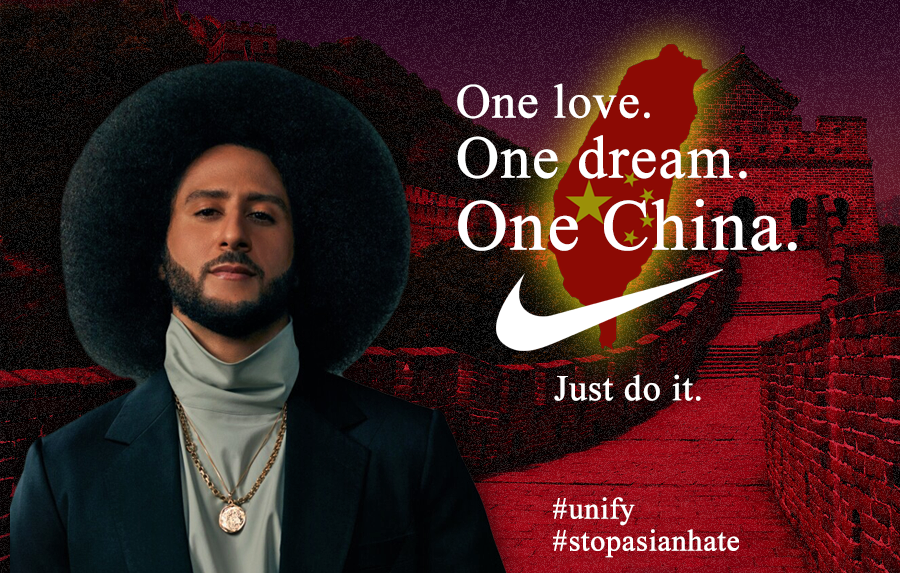 CUPERTINO — Apple is "still considering" the Chinese government's request for access to the Taiwanese population's personal cell phone data in order to augment the military's ongoing "reunification campaign," the company's chief executive revealed Monday. "We have a responsibility to do business in China," Tim Cook said in a FaceTime call with members of Congress. "We can't ignore the fact that some markets simply operate according to different rules. At Apple, we value all forms of diversity, and that is why we will never abandon our commitment to world peace through world trade."

Cook lamented the supply chain disruptions caused by the Chinese military operation in Taiwan, but urged lawmakers to "keep an open mind" and consider the "big picture" before taking drastic action. "Most of our [workers] have been conscripted into the Army and replaced with [younger, less experienced workers], which is regrettable from a production and quality control standpoint," Cook said. "On the other hand, dying for one's country, fighting for a noble cause in the pursuit of peace? I can't really argue with that. It's more honorable than jumping out a factory window."

NEW YORK — Several of the NBA's most prominent players, including superstar forward LeBron James, will not face fines or suspensions for leaving their teams mid-season to serve as morale officers in the People's Liberation Army, league commissioner Adam Silver said Monday. "What is alleged to be happening in China right now is bigger than all of us," Silver said. "We have seen how basketball can be an important form of people-to-people exchange that deepens the ties among all citizens of the world. I don't think the NBA is in a position right now to cast judgment or hand down punishments for legitimate acts of political expression."

James said last week that renouncing his American citizenship to join the Chinese armed forces, just days after President Xi Jinping announced the kinetic pacification of Taiwan Province, was a "personal decision that requires no further explanation." Writing in the Atlantic, journalist Jemele Hill commended James for "standing up to the status quo" and questioned "whether a white athlete would receive as much scrutiny under similar circumstances. " 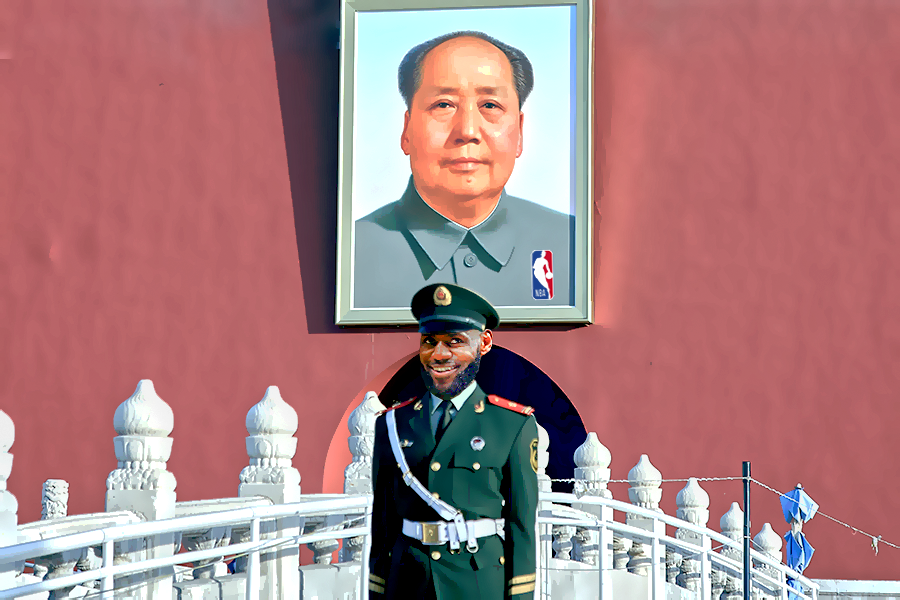