Sen. Jeanne Shaheen (D., N.H.) is facing a fierce backlash for accepting thousands of dollars and the endorsement of the liberal Middle East advocacy group J Street, which has long stirred controversy for political candidates and recently came under fire for accusing Israel of "fanning growing flames of anti-Semitism."

Shaheen, a member of the Senate Foreign Relations Committee, has taken at least $4,300 from J Street’s political action committee (PAC), which funnels money to candidates that J Street believes will carry out its fringe policy objectives in Congress.

While many members have avoided being endorsed by J Street—which Democrats and Republicans on Capitol Hill have described as a dangerous albatross in foreign policy circles—Shaheen, and a handful of other far left Democrats, have risked their pro-Israel credentials to back the group.

Shaheen’s decision to join forces with J Street has drawn criticism in political circles from Washington, D.C., to New Hampshire, where observers accuse the senator of abandoning Israel at a critical time in the Jewish state’s history.

The New Hampshire Republican State Committee (NHRSC) on Tuesday demanded the Shaheen "sever her ties" with J Street, which it described as a "radical fringe group."

"Radical organizations like J Street are determined to attack Israel and undermine Israel's right to defend itself from terrorist attacks. It is disgraceful that Senator Jeanne Shaheen would associate herself with a fringe group like J Street and support their shameful advocacy efforts," NHGOP chairman Jennifer Horn told the Washington Free Beacon in a statement. "As a member of the Senate Committee on Foreign Relations, Senator Shaheen needs to immediately denounce J Street's shameful statements and return the contributions that it has funneled into her campaign bank account."

A spokesman for Republican Scott Brown, who is challenging Shaheen, told the Free Beacon that there is a stark difference between the two candidates when it comes to the Israel.

"Scott Brown has always stood shoulder-to-shoulder with Israel and supported its efforts to defend itself," Brown spokesman Colin Reed said. "He understands the challenges they face, as one of his first trips as a senator was to the city of Sderot, which faces the daily threat from Hamas rocket attacks. Israel is our strongest ally in the Middle East, and Israel will have a strong ally in the Senate once Scott Brown is elected."

Shaheen, who, like J Street, has criticized Israel for its so-called "settlements" and chastised what she termed the Jewish state’s "provocative actions," received a ringing endorsement from J Street on its website.

"She has been a leader in the Senate on national security issues and a vocal proponent of U.S. leadership toward a two-state agreement," J Street wrote. 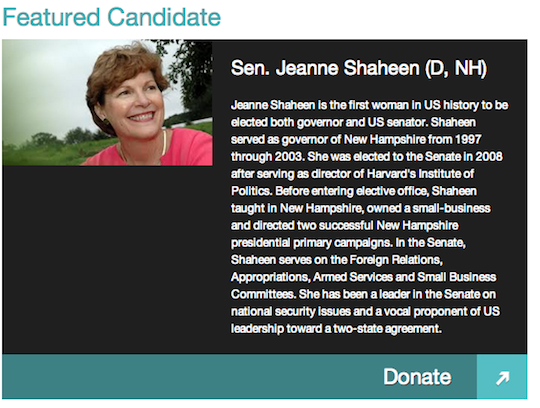 Pro-Israel insiders and sources in Congress warned that Shaheen is aligning herself with a group known for its radical stances.

On Friday, J Street finally took a stance on the most recent conflict between Israel and Hamas by accusing the Jewish state of "fanning the flames of anti-Semitism."

"Failure to solve this conflict is eating away at support for Israel around the world, damaging the country’s legitimacy and, in some cases, fanning growing flames of anti-Semitism," J Street leader Jeremy Ben-Ami said in a posting on the group’s website.

Ben-Ami also called Israeli lawmakers "racist" and accused them of not being a "credible partner" for peace.

Ben-Ami did not make note of Hamas’ commitment to destroy Israel and commit genocide against Jews across the world.

J Street, which has failed to gain legitimacy in mainstream pro-Israel circles, has been engulfed in controversy since its inception.

The group has been caught lying to reporters and the public about the sources of its funding. Its senior officials have even dubbed the creation of Israel "an act that was wrong."

One senior congressional aide who works on Middle East issues said that J Street’s endorsement of Shaheen is already raising eyebrows on the Hill.

"An endorsement from J Street could be the kiss of death for vulnerable Democrats like Senator Shaheen," said the source. "By pressuring Israel to negotiate with terrorist-backed governments and opposing new Iran sanctions, J Street has rendered itself irrelevant at best and dangerously anti-Israel at worst. Any true friend of Israel would be hard-pressed to defend J Street's fringe, liberal agenda."

"Shaheen can of course take money from whoever she wants. But she cannot take money from a group that blames Israel for fueling global anti-Semitism and still call herself pro-Israel," Pollak said. "No campaign donation is worth putting yourself in league with such people."