DES MOINES — The best part about being a journalist on a plane is knowing that, if the plane crashes, your death would be among the most tragic and would be reported as such by your colleagues in the journalism community—after they'd contacted your relatives to confirm how brave you were to cover politics in Donald Trump's America.

The equation changes, of course, when that plane is flying to Iowa just days before the Democratic caucuses. Odds are, most of the people on the plane are journalists rushing to the scene of the fire, hoses at the ready. Why else would the plane be full? Who else in their right mind would take a public flight to Iowa in February?

Democratic strategists, that's who. We can ignore them, though. They get paid 10 times more than journalists for what is essentially the same job. And no strategist has ever risked it all the way Jim Acosta does on a daily basis.

Fortunately, the plane doesn't crash. More importantly, it departs and arrives on time. The airlines know to give priority to flights with journalists aboard—out of respect for the profession, of course, but also out of fear. Their public relations teams must tremble at the thought of a verified journo rage-tweeting a travel delay to thousands of followers. And if that doesn't work, we can always blame Trump.

That's only the first of many perks to being a political journalist. There are also a lot of free drinks to be had if you don't mind chatting and exchanging contact info with an assortment of psychopaths. Occasionally, a corporation will gift you a stuffed pony with its logo on it. If you're lucky, a Democratic president will give you a job.

What we political journalists—so often accused (very unjustly) of being self-righteous elites—fail to realize is this: Sometimes, we are the perk. The benefits of visiting a state that regularly plays host to large quantities of political journalists become increasingly clear the more time one spends in Des Moines, the capital and most populous city of the U.S. state of Iowa, according to Wikipedia.

One can see the great import of political journalism in the abundance of Acela-corridor accoutrements provided when we come to town: riverside lofts, artisanal bakeries, bespoke cafés, waxing boutiques, quirky thrift shops, buses. "Welcome Media," reads a large banner hanging from a street lamp on Locust Street, and you know the sentiment is sincere. After all, what better way to assess the quality of your people and products than by exposing them to the discerning tastes of highly educated professional fact-finders?

"Iowa Nice," a term presumably coined by an observant reporter, is trending here in the heartland. (Irony alert: Trump won the state by almost 10 percentage points in 2016.) It's a little obnoxious, quite frankly. The hotel receptionist takes her sweet time before asking me what I do. I had to restrain myself; though tempting, it would be foolish to waste a business card so soon upon arrival. My Uber driver didn't even bother to ask, but at least he was an immigrant.

Later in the evening, Bon Iver plays at a Bernie Sanders rally in the suburbs. Of course. The venue is crawling with Chapo Trap House understudies. It's surrounded on all sides by strip malls and churches. This is why the Europeans don't like us. The concession stand has run out of hot dogs and there's no truffle oil for the loaded nachos. Michael Moore takes the stage and starts dropping F-bombs. I miss Beto.

Bernie never showed. He had to call in from Washington, D.C., which has plenty of top-notch music venues, by the way, and world-class cuisine, but isn't even a state. Like most journalists, I agree with everything he says, but I also trust the New York Times and consequently have pre-written a synopsis on the "moral victory" of Elizabeth Warren's fourth-place finish. My second Uber driver, a white male, is "pretty pro-Trump" and wonders why Rep. Tulsi Gabbard (D., Hawaii) hasn't gotten more traction. Guess they have Facebook here in Iowa. Thanks, Russia.

None of the presidential candidates show up to the following morning's Climate Crisis Parade, but the marchers don't care. They came for one reason and one reason only: The media is also here. "Des Moines will be swarming with national and international media during the days leading up to the Caucuses on February 3, giving Iowans a unique opportunity to take our message about the urgency of climate change to the media and the general public," the organizers announced prior to the march.

Urgency? Check. Message? Inconclusive. That said, watching a man dressed as a pope, and another as a pilgrim, pull a Conestoga wagon emblazoned with "colonialism" and impaled by giant "reparations" arrows, I am overcome with a vague sense of poignancy. Most of all, I can't help but conclude the media will play a crucial role in combating the climate crisis.

Just then, an emission-spewing SUV drives by and honks its horn. But to everyone's surprise, it is not a racist Trump supporter. It's Dr. Cornel West, who leans out the back window to offer a gesture of solidarity with the marchers, as well as the reporters covering the event. One young participant can't believe his luck. "That's so cool," he says, dressed as the Grim Reaper. "I was just listening to one of his lectures on the economy." 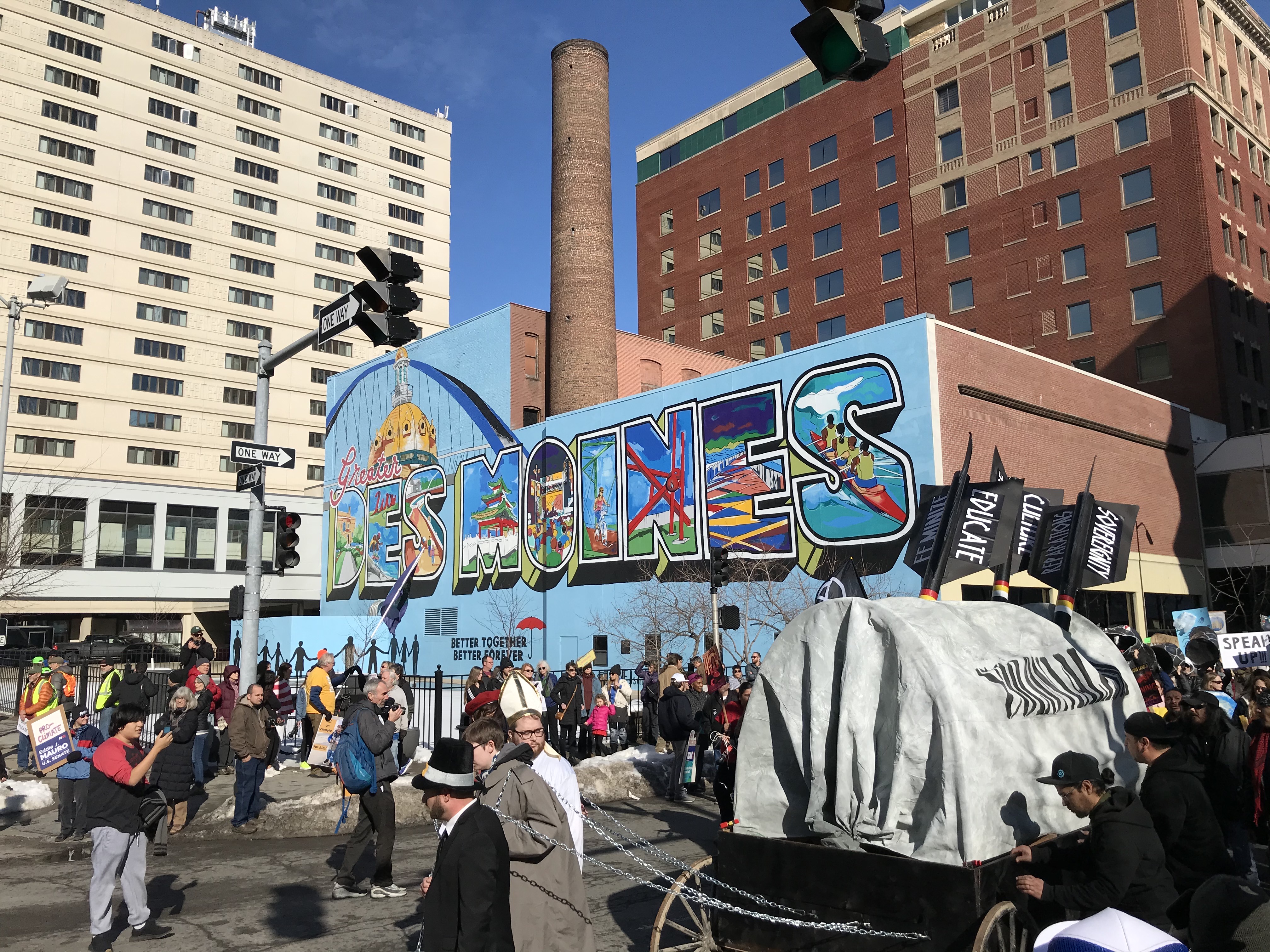 But being a political journalist in Iowa can be an exhausting and disorienting experience too. Fortunately, Tammy Haddad is here to help. Haddad, who in 1993 started the Garden Brunch "to gather friends from New York and LA who were in Washington for the annual White House Correspondents' Dinner," is hosting a "Snowflake Garden Brunch" at the Tea Room in downtown Des Moines.

The brunch, co-hosted by Democratic strategist and corporate communications consultant Hilary Rosen, promises to be "the central gathering of leaders in government, politics, media, business, and celebrities who are in town for the kickoff of the country's presidential cycles" and will take place in Iowa's "most historic and iconic venue." Being handed press credentials to attend a brunch and sliding up to a full open bar at 11 a.m., one almost forgets how far away Georgetown really is.

The event is sponsored, naturally, by Wells Fargo, the banking giant many leading Democratic presidential candidates have attacked by name. Its logo is featured in a Bernie Sanders campaign ad that will run during the Super Bowl. Another sponsor is Anthem, one of the largest companies in an industry (health insurance) much of the Democratic field has promised to disrupt. It feels good to be home.

But only for so long. The crowd grows bored and restless during the "charity" portion of the brunch when a Wells Fargo executive talks about the company's support for military families. Journalists and strategists huddle toward the back of the room, networking. 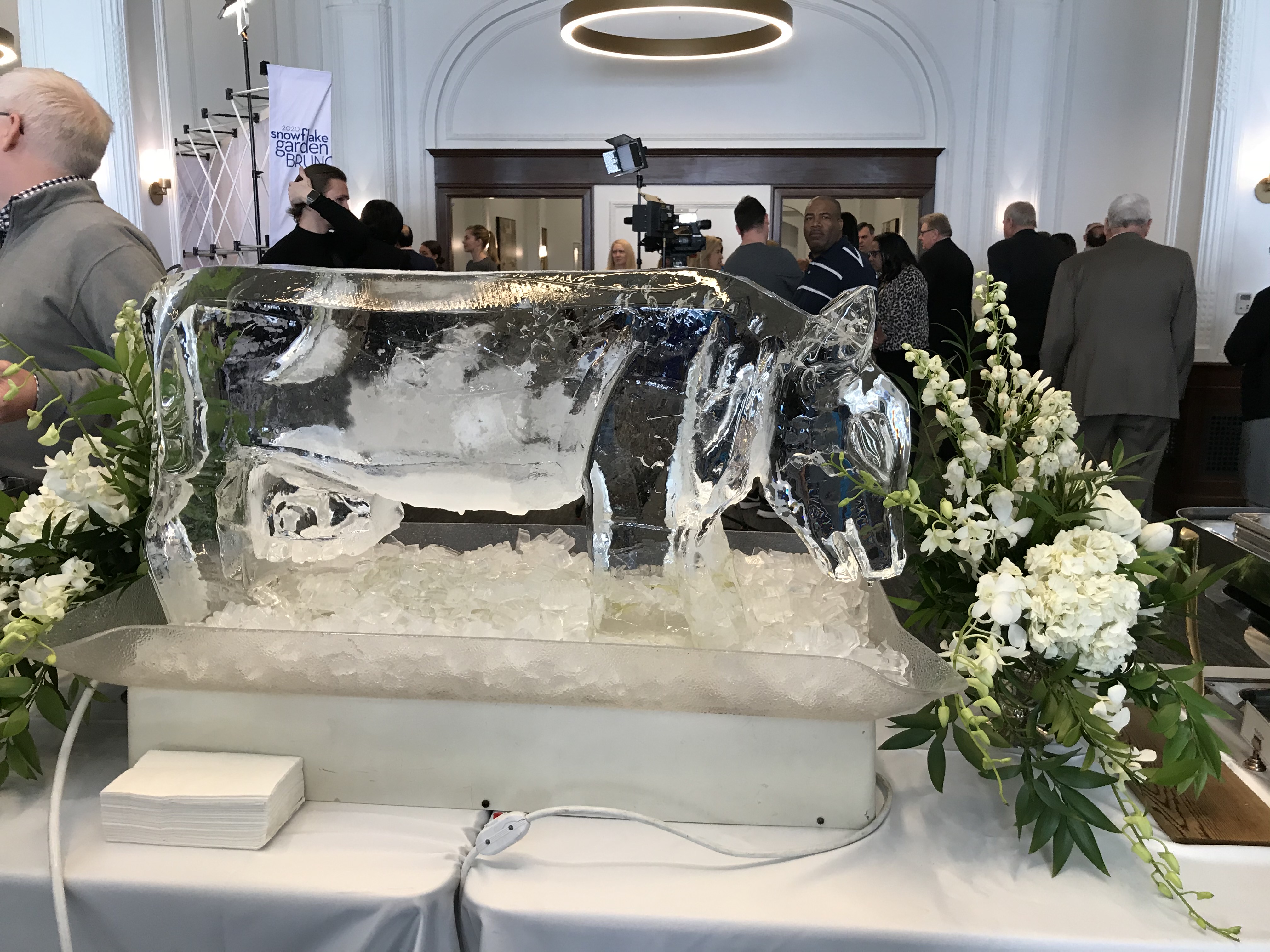 Regrettably, the promised "celebrities" are nowhere to be found. Former A-list anchor Greta Van Susteren interviews guests upon arrival. Mid-tier CNN host John Berman makes an appearance, as does Jim Acosta's sidekick, Jeff Zeleny. It's not a White House Correspondents' brunch, exactly, but the wall of donuts, patriotic parfaits, and bovine ice sculpture do lend a charming "heartland" vibe to the gathering. Hilary Rosen extends warm thanks to the people of Iowa on behalf of "those of us who visit every four years."

There's news to report, which is probably why the top-tier reporters couldn't make it. At this very moment, for instance, CNN's Brian Stelter is reporting there is "no evidence" to support Trump's claim that former New York City mayor Michael Bloomberg is trying to secure a box to stand on during the next Democratic debate. Jim Acosta is tweeting his Google search results about the heights of the Founding Fathers.

There is, arguably, news happening here too. Candidates are addressing supporters throughout the state, making their final pitches ahead of the big day. At Lincoln High School in Des Moines, supporters of Pete Buttigieg await the candidate's appearance while the loudspeakers blare Tim McGraw's "My Next Thirty Years" (Fact check: Buttigieg turned 38 in January).

It's a cleaner, more articulate crowd than Bernie's. Buttigieg takes an audience member's question about his favorite Beatles song and just knocks it out of the park. "It's tough to pick this one," he said. "But I feel like at a moment like this the right answer's got to be 'Come Together.'" The crowd goes wild, proving once and for all it's definitely not insane to think a former mayor of the fourth largest city in Indiana should be the next president of the United States.

In conclusion: No, the state of Iowa probably doesn't deserve a star on the American flag. But that doesn't mean it's not a place where stars are born.