CNN commentator Jen Psaki cited state-run Chinese media Wednesday as evidence that President Donald Trump had an ineffective visit to the country, saying "Chinese papers" declared President Xi Jinping to have come out on top in their discussions about North Korea.

Trump returned this week from an extensive Asia trip, which include a pomp-filled visit with President Xi, who has become the most powerful Chinese leader in decades.

Psaki, who served as a spokeswoman for the State Department during the Obama administration, said she didn't think Trump left the impression in China that he and the U.S. were strong, saying he ignored issues like Chinese denial of market access.

"On North Korea, the Chinese papers now are talking about how this was a win for President Xi because he didn't push him and there hasn't been a change on the ground," Psaki said.

According to CNN, one analyst on state-run broadcaster CCTV said of Trump's visit that he "has given China what China wants, which is that respect on the global stage, as the other preeminent nation." The state-run Global Times said in an editorial that Trump "seems to be pragmatic on his Beijing policy, and has no interest in ideological diplomacy."

Trump has sought to get China to put economic pressure on North Korea over its rogue nuclear program.

Fellow CNN commentator David Urban, who worked on the Trump campaign, said one wouldn't expect private discussions over North Korea to be "blasted out" in Chinese media or "the front page of the Washington Post.

"I think it's unfair to say that they failed in dealing with North Korea," he said to Psaki.

How Trump Changed the World 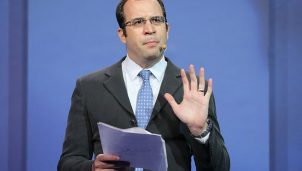