Hillary Clinton fundraiser and Cards of Humanity co-creator Max Temkin took to Twitter this week to argue that Edward Snowden should receive a presidential pardon, putting him at odds with the Democratic presidential nominee on the issue.

Temkin, who has raised nearly $400,000 in support of Clinton by selling election-themed card packs for his popular card game, said this week that the "American people owe an enormous debt of gratitude to Snowden," linking to a site advocating for him to be pardoned.

I believe that the American people owe an enormous debt of gratitude to @Snowden. We can begin to pay him back here: https://t.co/qZsphTZhzE

Temkin separately linked to an Amnesty International piece defending Snowden, saying that he was "proud to join many of my heroes and call for Obama to pardon Snowden."

Temkin's sentiments on Snowden have not been echoed by Clinton, who has said that there is no way Snowden "should be brought home without facing the music."

"[Snowden] stole very important information that has, unfortunately, fallen into a lot of the wrong hands," Clinton said.

Temkin said Snowden has to be pardoned because otherwise he will never get a chance to "make his case."

"Snowden faces charges under the WWI-era Espionage Act," Temkin said. "If he came home, he would not legally be allowed to make his case in court."

Temkin did not respond to emails asking whether he has any issues with Clinton's stance on Snowden, but continues to fundraise on her behalf.

His new website, AmericaVotesWithCardsAgainstHumanity.com, asks voters to indicate their electoral preference by purchasing packs of cards for either Clinton or Trump—although the proceeds will go to Clinton no matter what they choose.

"Today, we’re letting America choose between two new expansion packs about either Hillary Clinton or Donald Trump," says Temkin's site. "At the end of this promotion, Cards Against Humanity will tally up the sales of both packs, and depending on which pack gets more support, we will donate all the money in support of Hillary Clinton’s campaign." 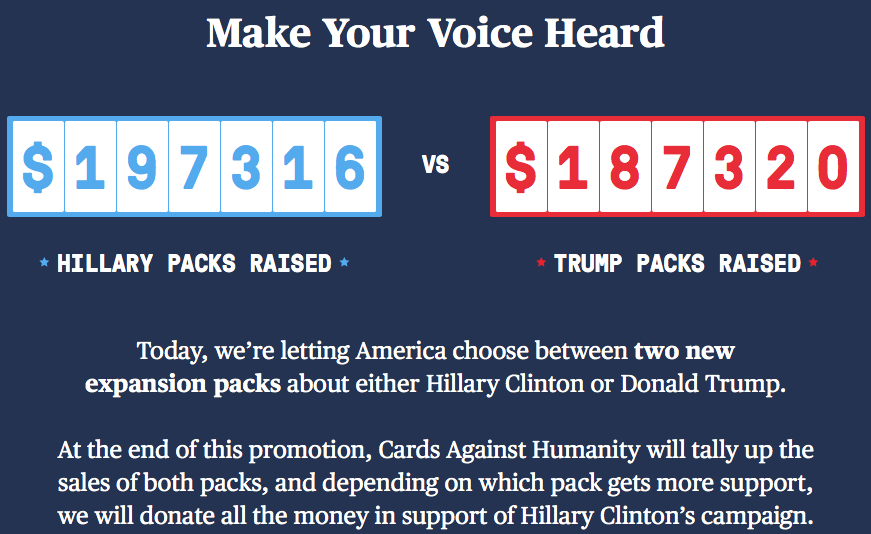 The site explains that "the funds that we take in will be split between direct, legal contributions to Hillary Clinton’s PAC, contributions to groups opposing Trump, and get out the vote programs in swing states."

Also made available as part of his Clinton fundraising effort is this $15 "limited edition risograph print" of one of his Tweets. 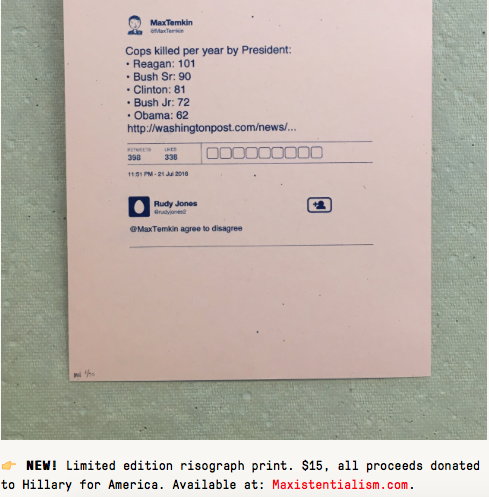 A spokesman for the Clinton campaign did not respond to a request for comment. Temkin's name does not appear on a campaign list of donors that have raised over $100,000.

It does appear, however, that the Democratic National Committee has been in contact with Temkin and his team at Cards Against Humanity this election cycle.