A new connection has emerged between Los Angeles Mayor Anthonio Villaraigosa and the eye doctor at the center of controversy surrounding Sen. Bob Menendez (D., N.J.).

A photographer from the doctor’s company, VOXXI, captured photos of Melgen with several prominent Democrats, including Villaraigosa. Melgen is the chairman of the board of VOXXI. 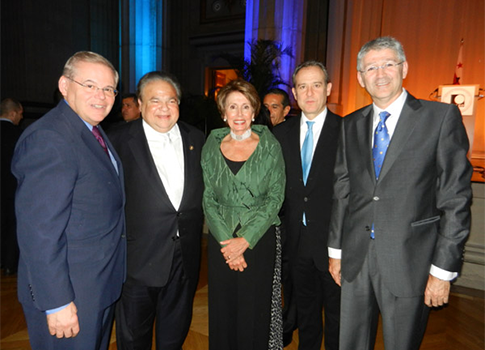 Villaraigosa is pictured with Melgen and Menendez in two photos: the three are smiling in one shot and engaged in conversation in another. 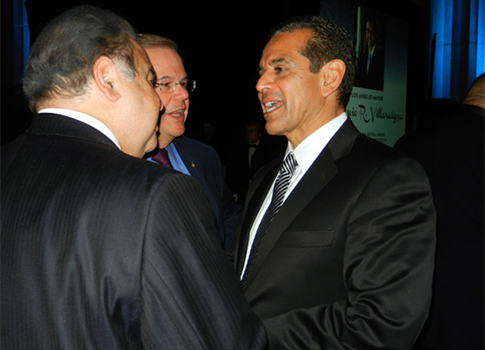 NALEO is an influential Latino organization that represents thousands of Latino elected and appointed officials.

Melgen is now the subject of an FBI investigation and his office was raided last week. He has not been charged.

The depth of the relationship between Melgen and Villaraigosa is unclear. Neither Villaraigosa’s nor Melgen’s offices returned a request for comment.

Menendez’s close relationship with Melgen has come under scrutiny.

Reports indicate that Menendez used his influence as a senator and urged officials to enforce a contract that would directly benefit his long-time friend and donor, Melgen. The contract was reportedly valued between $500 million to $1 billion over 20 years.

The doctor had an ownership stake in a company tied to port security. Aides to Menendez admitted the senator spoke to State Department officials about Melgen’s contract.

"Menendez, chairman of the Senate subcommittee that holds sway over the Dominican Republic, subsequently urged officials in the State and Commerce departments to press the Dominican government to revive that contract, at an estimated $500 million value," the New York Times reported.

Flights the senator accepted on Melgen’s private jet are now the center of a Senate Ethics probe. Menendez, who accepted two round-trip flights on Melgen’s plane in 2010, never reported the flights as gifts.

Menendez reimbursed Melgen for the flights once it became clear they could become the center of an ethical controversy. Menendez wrote a check from his personal account to Melgen for $58,500 last month. New Jersey Republicans requested a probe into the flights in November.

The Florida eye doctor has been involved in numerous investments in this country, the Free Beacon has found. He was listed as the manager of DRM Med Assist in West Palm Beach, and was the cofounder of Seisint, a computer company that claimed it could help locate 9/11 terrorists. He is also listed as a manager of Live Sports IP, LLC in West Palm Beach, which was formed in 2011.

Melgen also served on the board of the public company, Metropolitan Health Networks. SEC documents showed he owned more than 850,000 shares of the company. He resigned in 2005.

Melgen and Menendez have shared the spotlight at other Latino organization events. Menendez attended the Dominican American National Roundtable (DANRS) in 2010 and joined the DANRS Board in honoring Melgen.

Menendez also attended the launch party of VOXXI in Washington, D.C. and the company heaped praise on the senator. The CEO of VOXXI called Menendez the "Most Respected Hispanic Political Voice In Washington."