After apologizing for calling Donald Trump a "piece of shit," CNN's Reza Aslan deleted a separate tweet that called both the president and his eldest son the same thing.

Aslan apologized for his tweet the next day, and released a statement saying it was not like him to use profanity.

I should not have used a profanity to describe the President when responding to his shocking reaction to the #LondonAttacks. My statement: pic.twitter.com/pW69jjpoZy

But a quick Twitter search revealed that Aslan had penned several tweets using profanity to attack Trump and his supporters.

Oh the joy when this lying conniving scumbag narcissistic sociopath piece of shit fake president finally gets what's coming to him. https://t.co/iVZGAwCF9P

This piece of shit https://t.co/p8gLeISpo8

The words you're looking for are bat, shit, and crazy. https://t.co/X12kN8DW9a 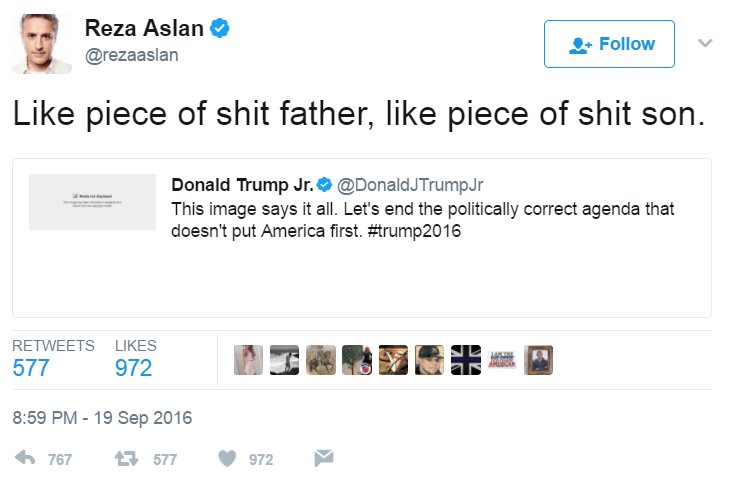 Among the controversial tweets circulating Monday that were not deleted was one from 2012, in which Aslan said he hoped then-Republican Rep. and Missouri senatorial candidate Todd Akin would be raped.

Just to be clear I was indeed wishing someone would rape congressman Todd Akin. I'd hate to be misunderstood.