The Hillary Clinton campaign wants to ensure that 2016 goes nothing like 2008, and part of that effort is tweaking her official bio to present a different Clinton to the public this time around.

Changes made to the "about" page on Clinton’s campaign website reveal an effort to modify her image and distance herself from terms such as universal health care, a Washington Free Beacon analysis shows.

One major modification made to her current campaign website is the notion Clinton chose not to join a big law firm due to her "commitment to public service and fighting for others—especially children and families—that she’s carried all her life."

This commitment to children and families brought her to the Children’s Defense Fund, where she went door-to-door "gathering stories about the lack of schooling for children with disabilities."

Below is the segment from the current bio: 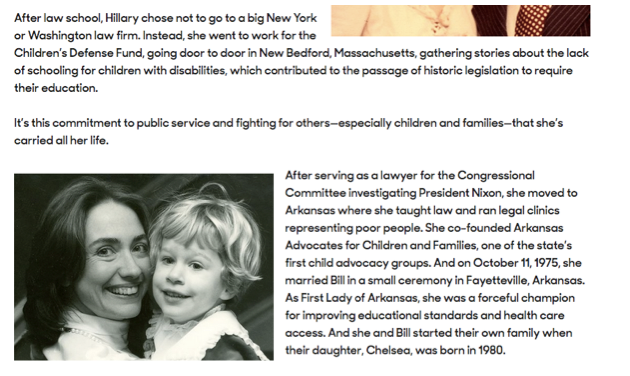 In 2008, her decision to forgo a career at a big law firm was made because "she followed her heart and a man named Bill Clinton to Arkansas."

Clinton also added the terms "activist" and "volunteer" to the list of roles she has held in her life.

Here is the list in 2016, which notes that Clinton has "never forgotten where she came from or who she’s been fighting for throughout her life."

These labels were absent from her bio in 2008.

Also missing is any mention of Clinton’s "fight for universal health care" and "commitment to health care for every American" that existed in 2008.

The current iteration of Clinton’s bio modifies the claim to say that Clinton "tenaciously led the fight to reform our health care system so that all our families have access to the care they need at affordable prices."

Added to Clinton’s new bio is that as First Lady in 1995, she led the U.S. delegation to the U.N. Fourth World Conference on Women and that her "groundbreaking speech" at the conference was "inspiring [to] women worldwide."

There were also multiple passages that appeared in 2008 but no longer in 2016. One removed passage was about her work on the Senate Armed Services Committee helping the military.

Also removed was that she was a "partner in a law firm" and was "twice named one of the 100 most influential lawyers in America." The passage also mentioned her work on the issue of "equal pay" for women.

A request for comment to the Clinton campaign on the reasoning behind the changes was not returned.