Not that long ago—just a week ago in fact—many in the media lost their minds over a Trump supporter's alleged plan to mine the social media feeds of reporters for damaging material. The New York Times, which broke the news, warned the resurfaced posts would be "stripped of context or presented in misleading ways," adding that the endeavor was "fundamentally different from the well-established role of the news media in scrutinizing people in positions of power." A former Washington Post editor declared on record that "if it's clearly retaliatory, it's clearly an attack, it's clearly not journalism."

After all the outrage, you know what would be really embarrassing? If only a week later, a mainstream media outlet dug through the old Facebook posts of an obscure conservative, took one badly out of context, and got him fired. Well, guess what... 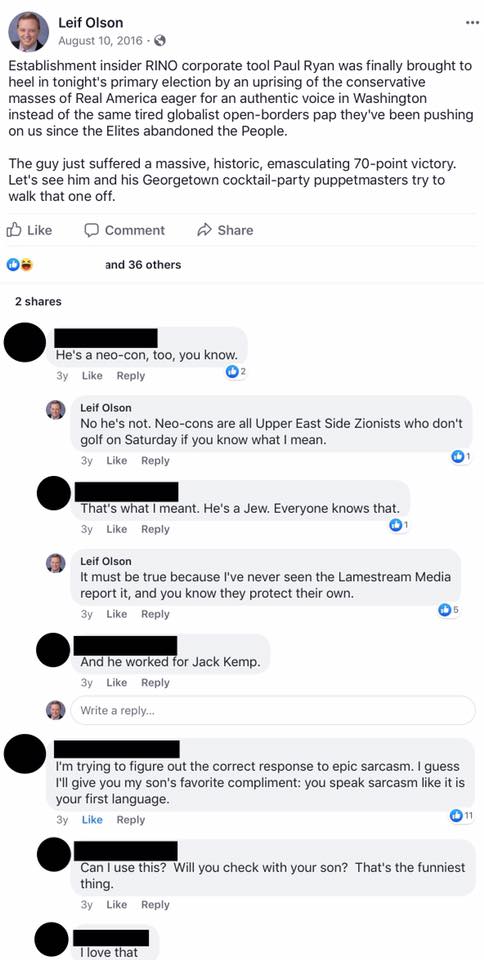 The post is mocking then-closeted, now-avowed white nationalist Paul Nehlen, whose 2016 primary campaign against then-House Speaker Paul Ryan ended in abject failure. Olson's reference to Ryan's "massive, historic, emasculating 70-point victory" is about as obvious a giveaway as you can get.

Penn's piece readily admits that Olson's comments "started as a sarcastic quip about former House Speaker Paul Ryan's blowout primary victory," but in his telling it "devolved into an exchange referencing two anti-Semitic tropes." Bloomberg's headline accused Olson of making "Anti-Semitic Facebook Posts." The lede declared that the Trump appointee was "suggesting the Jewish-controlled media 'protects their own.'" When it came time to describe the actual post, Bloomberg almost imperceptibly moved the goalposts.

The story's credibility rested almost entirely on the Anti-Defamation League's condemnation, which provided cover for Bloomberg's factual declaration about a sarcastic joke. Within 24 hours, the ADL retracted its initial assessment. You now have an awkward situation in which a Bloomberg story claims as fact that the post was anti-Semitic, but also includes a quote from the foremost anti-Semitism watchdog: "We appreciate Mr. Olson's clarification that he intended to be sarcastic with his posts, and accept his explanation of the content in question."

The eternal question in these media bias cases is whether the reporters and editors in question are malicious or ignorant. This is probably as clear a case of malice as you'll see. The only purpose for "a review of a decade of Olson's Facebook posts" is to look for dirt. The reason for looking for that dirt is plain as day in the lede. Penn tells us Olson has "a history of advancing controversial conservative and faith-based causes in court."

But even that's not true, according to Olson. "The Pidgeon v. Parker case was filed before the U.S. Supreme Court issued its decision in Obergefell v. Hodges," he wrote on Facebook. "I assisted with a technical jurisdictional issue when the case was argued before the Supreme Court of Texas, but, far from being 'much of [my] work,' I otherwise haven't worked on it since Obergefell was issued." Olson's post went on to highlight several other crucial omissions or misstatements by Penn.

For those who aren't especially tuned into social media, it's hard to convey the extent to which no one defended this story, not even most liberals. And yet, Bloomberg is standing by its reporter.

Asked Bloomberg for a comment on the @benjaminpenn story on Leif Olson. https://t.co/Nt7fQGxMUT The response is unsurprising and highly disappointing: pic.twitter.com/oX1c9a8wcI

There's a shadow of a good point here, namely that the decision for Olson to "resign" was almost certainly made by White House officials. That does not vindicate Bloomberg's reporting—it just proves that political operatives are overly risk-averse and jump to conclusions, just as the ADL did.

That excuse evaporated on Wednesday when Olson was reinstated by the Department. "Following a thorough reexamination of the available information and upon reflection, the Department has concluded that Mr. Olson has satisfactorily explained the tone of the content of his sarcastic social media posts and will return to his position in the Wage and Hour Division," it announced.

Now Bloomberg is out of excuses, having lost both the ADL and the administration. Bloomberg isn't sticking with the charge of naked anti-Semitism, reverting to the "referenced anti-Semitic tropes" characterization in its write-up on Olson's re-hiring. The initial story remains up, unretracted, still tarring Olson as an anti-Semite. The editors and reporters who wrote it remain unpunished.

I'm inclined to agree with my fellow RINO, Allahpundit, who tweeted, "If Bloomberg had run a hit piece about a liberal as dirty as the one they ran about Leif Olson, the outcry would have drawn an apology already and Penn would have been suspended or fired." Again, many liberal and mainstream reporters did challenge the story on Tuesday. But Bloomberg knows as well as I do that the outcry won't be sustained, and it can ride the controversy out. Fellow reporters will not treat the Olson affair as a permanent black eye for Bloomberg or Penn the way they did for Andrew Breitbart after the Shirley Sherrod affair.

To bring things full circle, the prospect of reporters getting unjustly sacked because of old posts received more sustained outrage than when a man outside their in-group was unjustly fired. Olson gets to go to work today, but so does Penn, with nary an on-air mention from CNN or a biting rebuke from the Times. Who expected otherwise?