Sen. Bernie Sanders (I., Vt.) has a narrow lead in funds raised in Iowa going into Monday evening's pivotal caucus in the Hawkeye State.

That fundraising total may buoy the Sanders campaign, widely expected—but not guaranteed—to win in Iowa on Monday evening. At the same time, it bodes ill for Biden, whose prospects between now and March's Super Tuesday primaries look increasingly grim.

Sanders's precise fundraising total in Iowa for the fourth quarter of 2019—the most recent period for which campaigns have released data—ran to $118,654 among itemized contributions. (Note: the FEC only requires the disclosure of itemized contributions from individuals who have given in excess of $200 in total. Sanders's true fundraising haul is therefore almost certainly higher.) 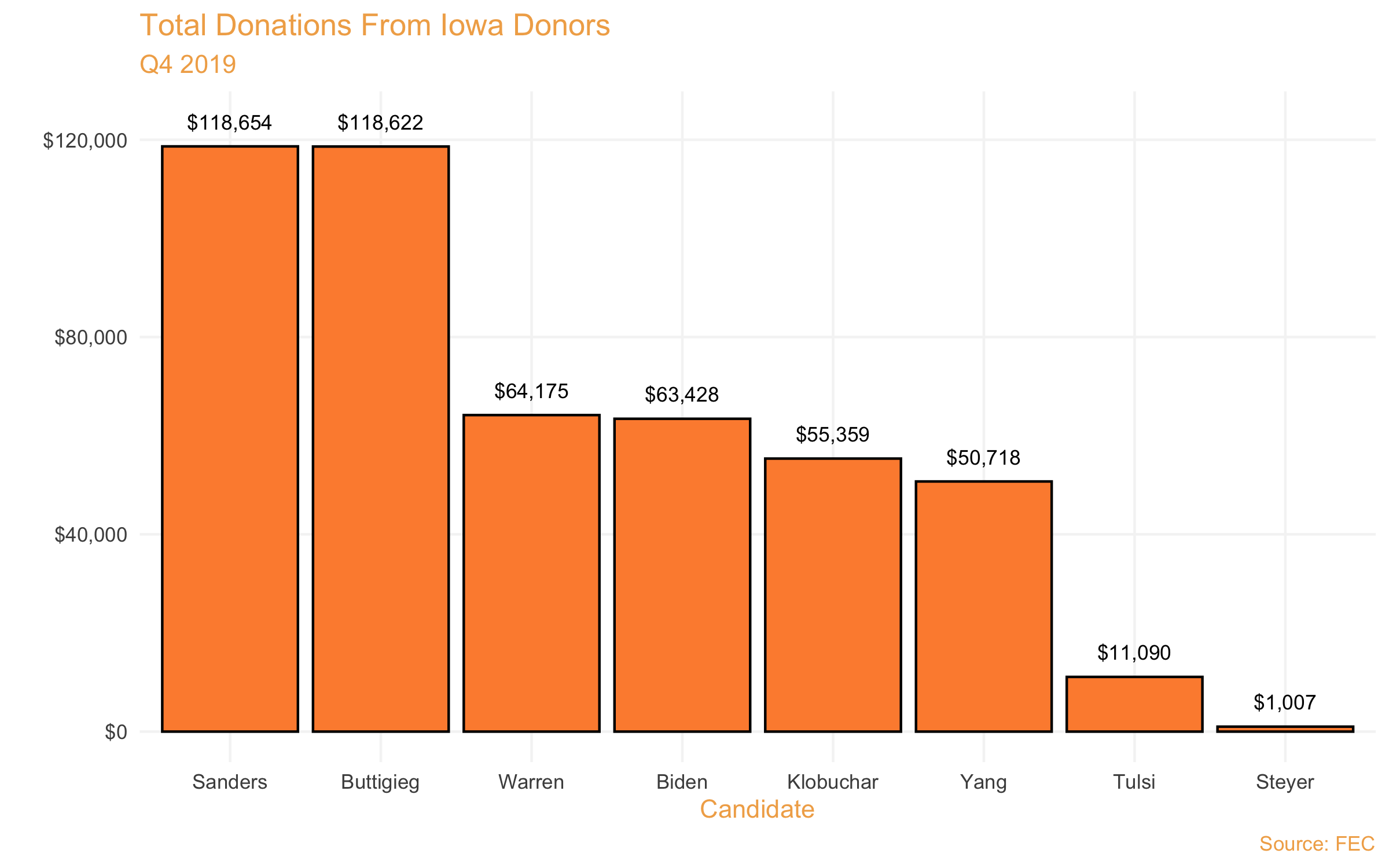 That figure is almost indistinguishable from Buttigieg's $118,622. The next tier, Biden and Sen. Elizabeth Warren (D., Mass.), raised on the order of $64,000. The candidate who saw the fewest Iowa contributions was self-funder Tom Steyer, who took in just $1,007.

While Sanders and Buttigieg had similar overall receipts, the Vermont senator's funds came from substantially more donors. Nearly 800 Iowans gave Sanders $200 or more, compared with Buttigieg's 513 donors. Sanders had 2.4 times as many itemized donors as Warren and nearly 3.5 times as many as Biden. 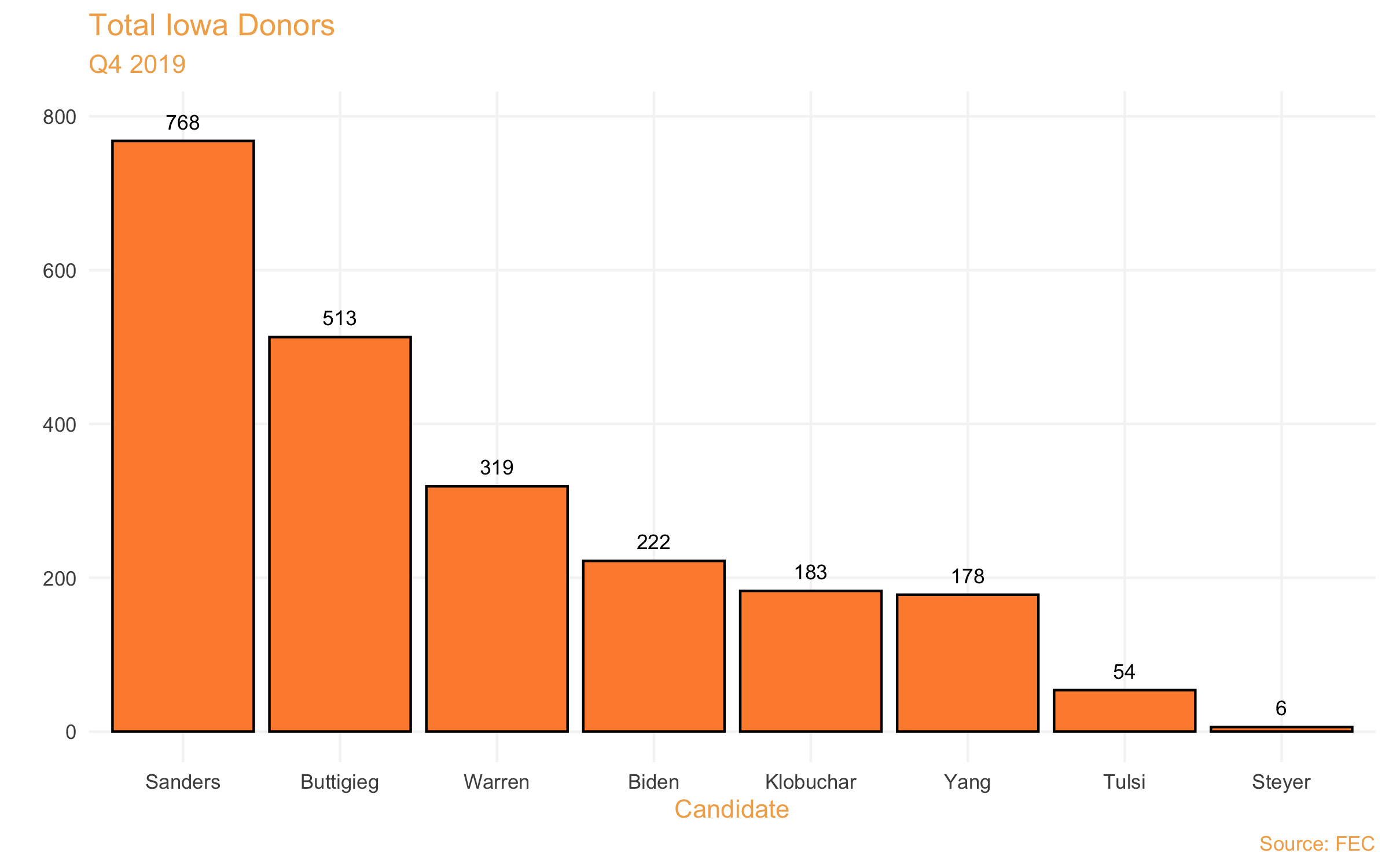 There are clearly limits to the applicability of these data which are, necessarily, about a month out of date. Data from the last four contested Iowa caucuses, however, suggest that there is at least some reason for Sanders supporters to take heart. 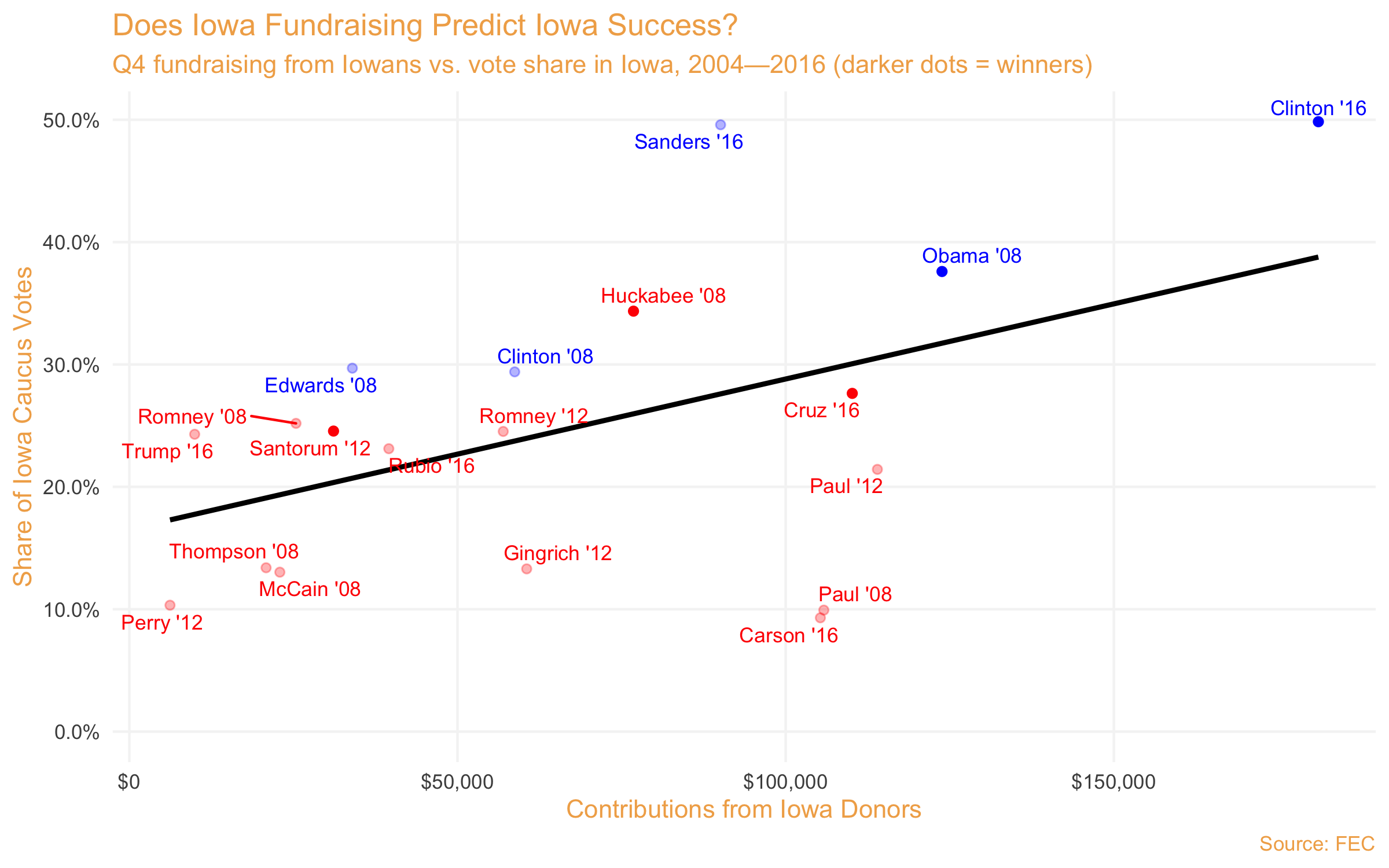 In both of the most recent meaningfully contested Democratic caucuses, the top fundraiser in December of the preceding year clinched the victory—Barack Obama in 2008 and Hillary Clinton by a narrow margin in 2016. The record for Republicans is more mixed, but end-of-quarter fundraising may have indicated the support that allowed Ted Cruz to pull out a tight victory in 2016, as well as Mike Huckabee's success in 2008.

Sanders's lead in fundraising confirms what polls have increasingly shown going into the caucus on Monday. He is currently up by 3.7 points in the RealClearPolitics polling average, while betting markets give him a 69 percent chance of victory as of the time of publication.

The widely expected victory, then, would be bad news for Biden. Long considered the frontrunner, Biden is nonetheless expected to take a hammering in New Hampshire next Tuesday. His chances among South Carolina's black voters, once expected to lead him to victory in the Palmetto State, now also look increasingly dim—a poll released Sunday showed Sanders and Steyer closing the gap, with the latter having picked up much of Biden's support among African Americans.