LAS VEGAS — Lesson learned. Attend a Democratic caucus with a beard on your face, and everyone there will naturally assume you represent the Bernie Sanders campaign. You'll be tempted to say yes, because it always feels good to win in Vegas. Because on this otherwise normal Saturday in the epicenter of capitalism, a 78-year-old socialist has claimed victory and laid waste to the Democratic Party.

Fox News and NBC News, among others, have pronounced Sanders the winner of the Nevada caucus, an outcome that was widely anticipated. The final results, if and when they're reported, are likely to show a considerable margin of victory for the candidate who has vowed to "take on the Democratic establishment."

Sanders spiked the football after he was declared the winner in Nevada. He made clear that his campaign intends to effectively end the Democratic primary on Super Tuesday when 14 states, including California and Texas, head to the polls. Addressing a crowd of supporters in San Antonio, the senator predicted victory in Texas and took aim at his would-be opponent in the general election. "We have news for Trump. Love and compassion and bringing people together is a lot more powerful than divisiveness," said Sanders.

With three primary wins under his belt, the socialist from Vermont appears all but certain to be the party's presidential nominee in 2020. Sanders's victory in Nevada means he will overtake Buttigieg for the lead in national convention delegates. As many anticipated, Buttigieg was unable to duplicate his strong performances in Iowa and New Hampshire, presumably due to his statistically insignificant levels of support among non-white voters.

Addressing supporters in Las Vegas, the former South Bend mayor took aim at Sanders, advising Democrats to consider the consequences of nominating a candidate who "believes in an inflexible, ideological revolution that leaves out most Democrats, not to mention most Americans."

The result in Nevada is a great one for Sanders and his supporters, and the ideal outcome for anyone who enjoys watching Democratic Party leaders and members of the mainstream media (excuse the redundancy) lose their f—king minds. MSNBC‘s Chris Matthews, for example, compared the Democratic Party's failure to stop Sanders's momentum in the primary to France's failure to repel the invasion of Nazi Germany in 1940.

Matthews's MSNBC colleague Chris Jansing could hardly contain her disappointment at having to report on Sanders's popularity among union workers caucusing at the Bellagio Hotel and Casino. Former Clinton adviser James Carville begrudgingly acknowledged that Sanders had emerged as the "clear, defined frontrunner," while chastising the media for failing to vet Sanders or promote the campaigns of his challengers. MSNBC‘s Ari Melber agreed.

Sanders dominated in Nevada at the "strip caucuses" designed to allow the union employees of the numerous Vegas hotels and casinos to participate. Some pundits had predicted a poor showing for Sanders among Nevada's unionized workforce due to the opposition of some union leaders to his proposed health care reforms.

Sanders did not, however, come out on top at the Paris Las Vegas Hotel, where 55 people showed up to caucus. Four candidates were viable after the first (and only) alignment in the hotel's Centre de Convention. Perhaps due to rampant sexism, Warren and Sen. Amy Klobuchar (D., Minn.) failed to receive a single vote. Biden took first with 21 votes, while Bernie placed second with 12. Buttigieg came in third with 11 votes, followed by Steyer with 10 votes. One person left before the final vote could be counted. 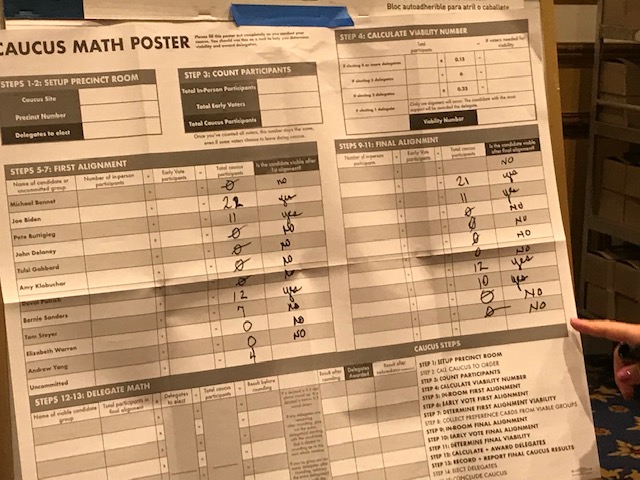 After collecting the results, caucus site leaders and other volunteers at the Paris Las Vegas—who said they were never asked to sign the nondisclosure agreements reported by CNN—attempted to follow procedure and perform basic math while a crowd of campaign observers and reporters looked on.

Despite considerable last-minute efforts to prevent a repeat of the caucus debacle in Iowa, where results couldn't be released for days, chaos reigned in Nevada as precinct chairs once again had trouble reporting their caucus site results via the state-party hotline. Numerous sites struggled with general confusion as to how the caucus results were supposed to be calculated.

Most campaign representatives had already left when it came time to formally nominate delegates to the state convention, per the rules of the caucus. All of Buttigieg's supporters, one caucus volunteer noted, fled the venue after collecting their complimentary box lunch.

Sanders victory in Nevada will be sure to make him a target at next week's Democratic debate in South Carolina, the last state to hold it's primary before Super Tuesday. Biden currently holds a slight advantage over Sanders in the Palmetto State, according to the Real Clear Politics polling average, but that margin has been shrinking dramatically in recent weeks.

President Trump congratulated Sanders on his win Saturday evening. "Looks like Crazy Bernie is doing well in the Great State of Nevada," the president tweeted. "Congratulations Bernie, and don't let them take it away from you!" 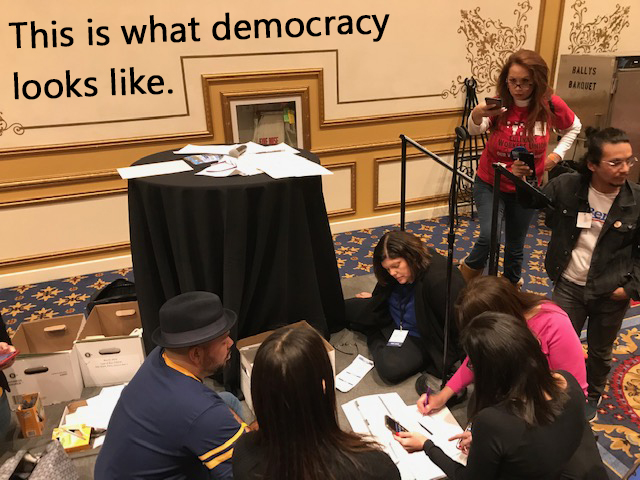