Ocasio-Cortez is making life hell for a bunch of kids, kids she falsely insinuated were adults on the McConnell payroll

Rep. Alexandria Ocasio-Cortez (D-NY) lost her comms director on Friday, and by Monday it already showed. Getting things rolling was this tweet:

Hey @senatemajldr – these young men look like they work for you.

Just wanted to clarify: are you paying for young men to practice groping & choking members of Congress w/ your payroll, or is this just the standard culture of #TeamMitch?

Let us say off the bat that the behavior displayed in the image is gross and uncalled for. It's still a lame hit; generally campaigns are not considered responsible for the behavior of anyone who wears their campaign paraphernalia. It'd be different if McConnell had a history of Trumpian statements encouraging bad behavior from his followers. But any politician is bound to have supporters who are crackpots and idiots through sheer mathematics. Ocasio-Cortez for example has five million Twitter followers, approximately a tenth of people suck, so she has 500,000 followers who suck. It'd be unfair to attack her on that basis.

That's why you have the really lame "are they on your payroll???" line, which if true would make it a legitimate gripe against Mitch McConnell, but is also evidence-less, just-asking-questions that would be skewered if it left the mouth of anyone the media did not fawn obsessively over. For my part, I thought it was really obvious from the outset that these were teenagers. That one kid looks maybe fifteen.

I suspect Ocasio-Cortez knew this, as this follow-up tweet got deleted. 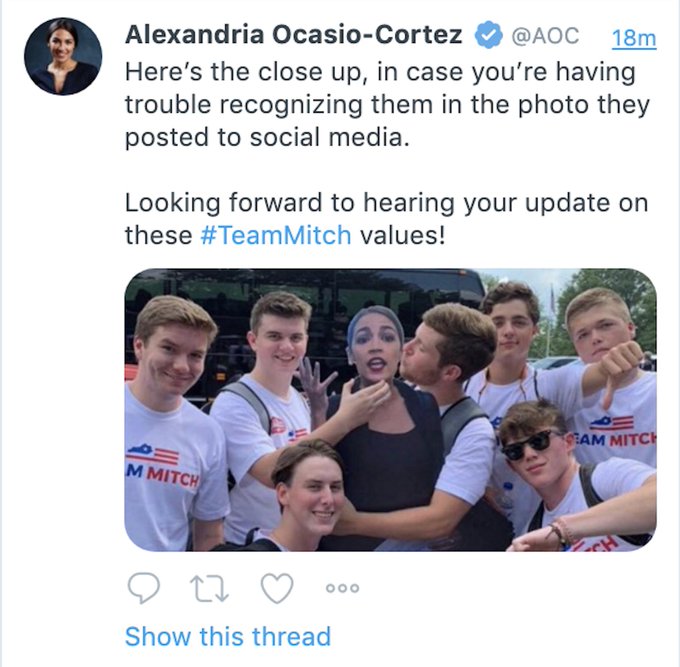 That this tweet was deleted suggests Ocasio-Cortez recognizes that there was something wrong with it. But there isn't much difference between the deleted tweet and the one that's still up, it's just a bit more overt about her purpose. Ocazio-Cortez evidently thinks it is okay to tweet out the uncensored faces of teenagers behaving badly to those five million followers and insinuate they were paid McConnell staffers. Apparently she draws the line at openly calling for them to be named and shamed, even though that's the foreseeable consequence of her actions. The deleted tweet indicates that was the intended consequence.

Of course, they have been named and shamed, not that I'll link to it or name them. There is no shortage of people posting dumb and offensive things on the Internet, and there needs to be a high bar for when it's acceptable for an elected official to elevate their posts and subject them to ridicule or far worse. That's my stance for adults; Ocasio-Cortez really should've considered deleting her original tweet too once it became obvious they were minors.

She didn't, naturally, which led to inevitable pushback from the McConnell campaign. Here is how The Daily Beast framed the response.

Mitch McConnell's campaign manager essentially says boys will be boys in response to that image of teens groping and choking a cutout of @AOC https://t.co/kRrAKUkf60

I'm going to let you in on a secret; "essentially" is a magic little word we writers use to make things into something we know they are not. Okay, so maybe X isn't strictly Y, but in essence it is. What's the "essence"? Whatever we say it is.

McConnell's campaign of course did not actually say "boys will be boys." What they actually said was, "These young men are not campaign staff, they’re high schoolers and it’s incredible that the national media has sought to once again paint a target on their backs rather than report real, and significant news in our country."

It's pretty clear "they're high schoolers" was not an excuse for their behavior, but asking why this is something the media and politicians are focusing on, and why the campaign is being asked to account for the teen's behavior. Both are valid questions, especially in the wake of the Covington fiasco. There is a longstanding cultural and legal understanding that minors are not as culpable for their actions as grown adults, today backed up by studies into the development of the adolescent brain. There should be a very high bar in the Internet Age for elected officials and the media to target for lifelong opprobrium people who lack full mental capacity, and it does not make sense to shame adults for the actions of kids they are not responsible for.

But in common parlance, "boys will be boys" does not convey the same idea, it's the boorish mantra of those who actually approve of the bad behavior of the boys. It's taken on a particularly charged meaning in the #MeToo era, in which the phrase has become synonymous with excusing or turning a blind eye to sexual assault. As The Daily Beast acknowledges, the McConnell campaign made clear that they did not approve of the teens' behavior, albeit in a joking manner. "Team Mitch in no way condones any aggressive, suggestive, or demeaning act toward life sized cardboard cut outs of any gender in a manner similar to what we saw from President Obama’s speechwriting staff several years ago," they said in another statement.

(The New York Daily News, incidentally, went even further and said the McConnell's staff "literally says boys will be boys." Uh, no, they literally did not. Not sure how that got past an editor.)

So you have a bad take, which then leads to a (third) bad tweet from Ocasio-Cortez on Tuesday.

"Boys will be boys."

Is that also the reason why you’ve chosen to block the Violence Against Women act too, @senatemajldr?

By putting it in quotations, Ocasio-Cortez is furthering the false impression that this is an actual quote from McConnell's staff, when of course it is not. And by focusing on The Daily Beast's warped framing of her response, she avoids having to address the actual substance of McConnell's response, namely that Ocasio-Cortez is making life hell for a bunch of kids, kids she strongly insinuated were adults on the McConnell payroll, and Jesus Christ, do I really have to keep explaining how insane that is?

Then, bankrupt clickbait factory Newsweek comes around with this tweet.

.@AOC slams McConnell campaign's "boys will be boys" defense: "Boys will be held accountable for their actions" https://t.co/FCs3zNgYwl

So now "boys will be boys" is something like two or three times removed from the original source, namely the opinion of a single journalist at Newsweek's competitor. To a reader coming late to the story, "McConnell campaign's ‘boys will be boys' defense" is simply a fact, a fact they'll tweet and retweet and will take on a life of its own, etc. All thanks to journalists and politicians acting in bad faith at every step.