The two-decade-long crime decline appears to have conclusively plateaued, a new report released Monday shows, as the share of Americans who faced a violent crime remained between 0.9 and 0.6 percent for the 12th year running.

Data from the latest National Crime Victimization Survey, a nationwide survey conducted annually since 1993 by the Bureau of Justice Statistics, show that roughly 1.2 million Americans, or 7.3 per 1,000 adults, report having been violently victimized in the past year. That's down from 8.6 per 1,000 in 2018, the first year to see a significant uptick in decades.

But the bigger picture the new data paint is of a stalled-out crime decline. After falling precipitously from 1993 through the mid-2000s, the violent victimization rate has hovered around 8 per 1,000. And while the NCVS does not stretch that far back, other major sources of federal data—namely the FBI's uniform crime reports—suggest that violent crime today remains elevated above where it was in the early 1960s, before the great crime wave of the 1970s and '80s. 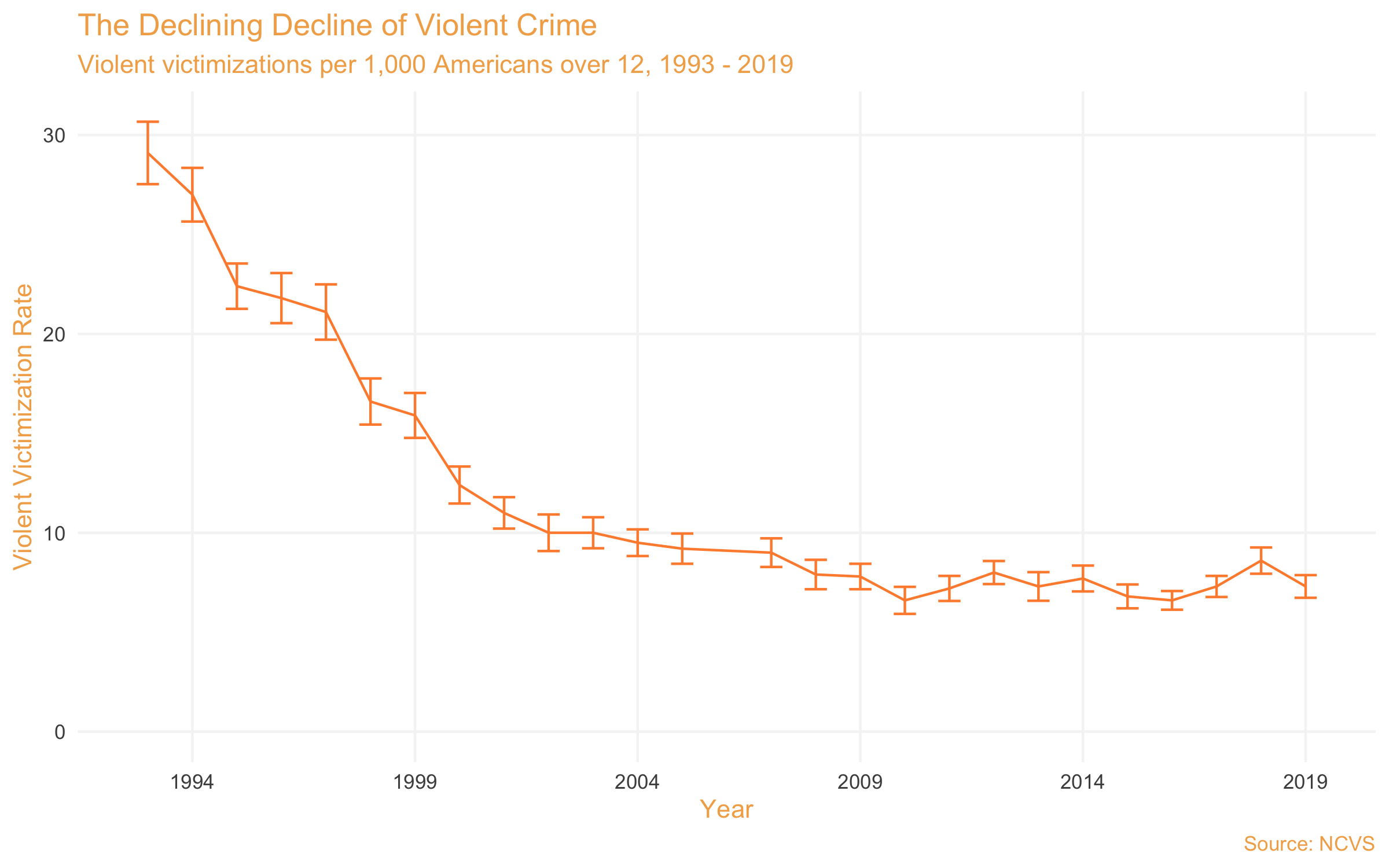 The so-called great American crime decline has been a key part of criminal justice reform rhetoric for decades, with advocates arguing that plummeting crime means that America can ratchet back incarceration and police spending. But the plateau in crime, now a well-established phenomenon, complicates that picture, suggesting that reform efforts may have slowed the crime decline, or that added reform could actually drive violence up.

The crime decline is one of the most significant—and hotly debated—facts of modern criminology. Criminologists do not agree on what caused this drop—demographics, policing tactics, incarceration, and even pollution may have played a role.

What is agreed on is the scale of the drop. As the FBI data show, crime rose precipitously through the early 1990s, with violent crime peaking in 1992. Since then, however, rates of violence fell just as precipitously. 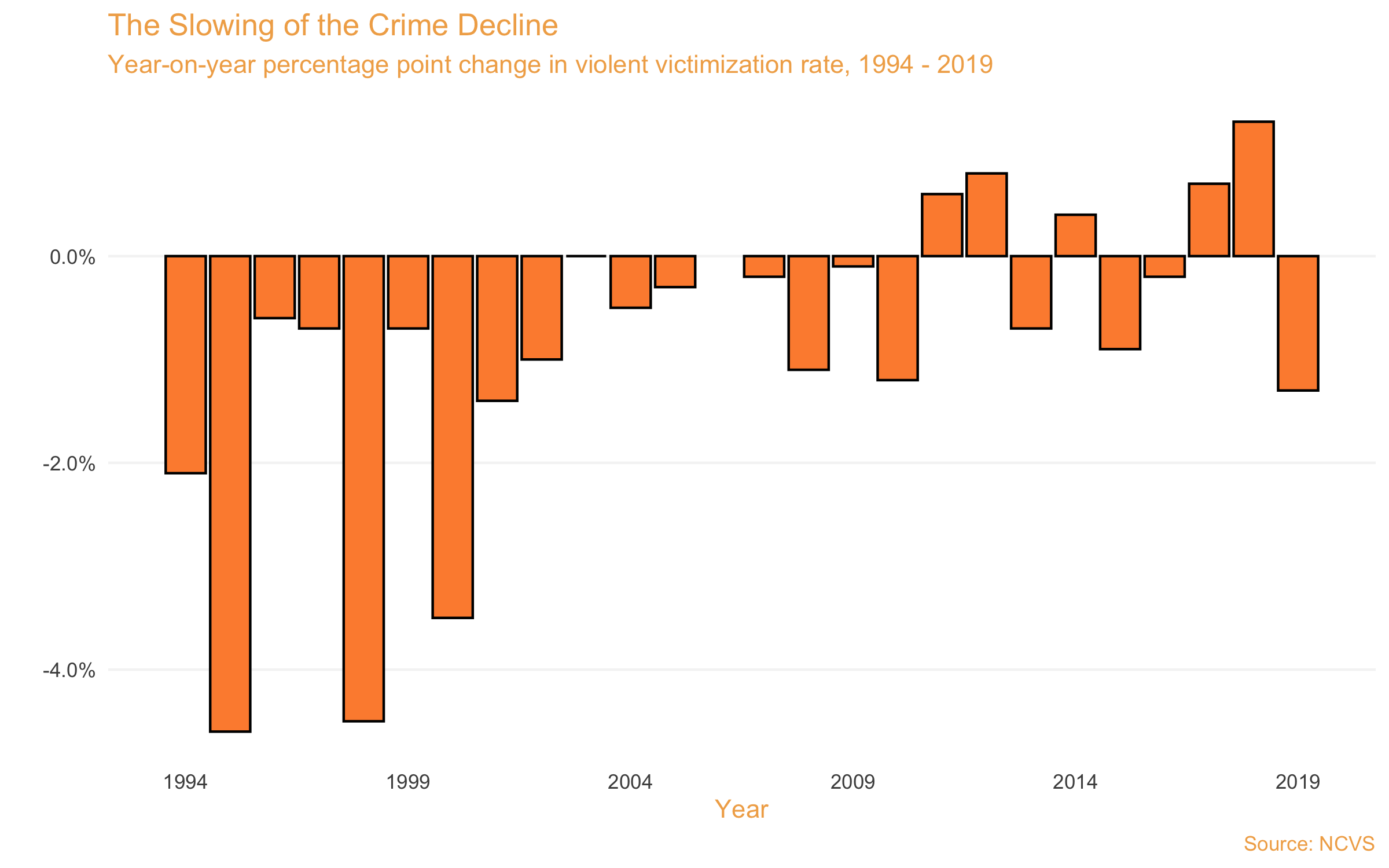 In general, since 2009 the trend in violent victimization rates has been one of small fluctuations—rates rise and fall but are generally within the range of 7.6 per 1,000, plus or minus one.

This plateauing, though longstanding, is little remarked, with analyses tending to focus on the overall magnitude of the drop since the 1990s, rather than the trend. It is possible that the plateauing is partially driven by the emptying out of America's prisons, as the prison population has also steadily dropped since 2008. But that decline is driven by nonviolent offenders and is highly concentrated in just a few states, suggesting that may not be the full explanation.

What is clear is that, as criminologist Thomas Abt has noted, violent crime rates remain above where they were in the 1960s, while the homicide rate remains roughly constant between the two periods.

"Looking back, one might observe that the U.S. experienced a remarkable decline in violence and crime over the past twenty-five years," Abt writes in his 2019 book, Bleeding Out. "Another equally valid observation is that after more than fifty years we have made no progress whatsoever."

The stalled-out crime decline has substantial impacts, both in general and in terms of racial equity. Respondents to the NCVS reported an estimated half-a-million rapes and robberies, and over a million aggravated assaults, in 2019 alone; black Americans account for roughly 25 percent of victims, more than twice their prevalence in the population.

That suggests that there is more work to be done on cutting violent crime in the United States. Progressives, however, have in recent months agitated for policies that would push the needle in the opposite direction, advocating for "defunding" or abolishing police departments even as research shows police cut crime.

That means the crime decline might not only have plateaued—in coming years, Americans could see a sustained increase for the first time in decades.