The share of the adult population in prison has fallen to its lowest point since 1997, a new report released Thursday by the Bureau of Justice Statistics shows.

The report is the latest instance of the BJS's ongoing Prisoners series, which has provided the public with detailed statistics on state and federal offenders for decades. Thursday's report provides information on the state of the nation's prison system in 2017, with data on both the federal system (which accounted in that year for about 12 percent of all incarcerated) and the prisons of the 50 states.

The U.S. prison system has been the subject of major dispute in recent years, with left-wing politicians and Emmy-winning documentaries decrying it as racist and overstuffed with low-level, non-violent drug offenders. The archetypical inmate in the minds of many reform advocates is, in the recent words of Rep. Alexandria Ocasio-Cortez (D., N.Y.), "a nonviolent person stopped w/ a dime bag."

To be sure, the United States does lead the world in per capita incarceration (although such counts tend to ignore political or religious prisoners, like the more than 100,000 Uyghurs likely being held in prison camps in northwestern China). However, the new BJS report paints a picture of a system that is shrinking, growing more racially equitable, and which mostly detains serious, violent offenders, not petty drug users. 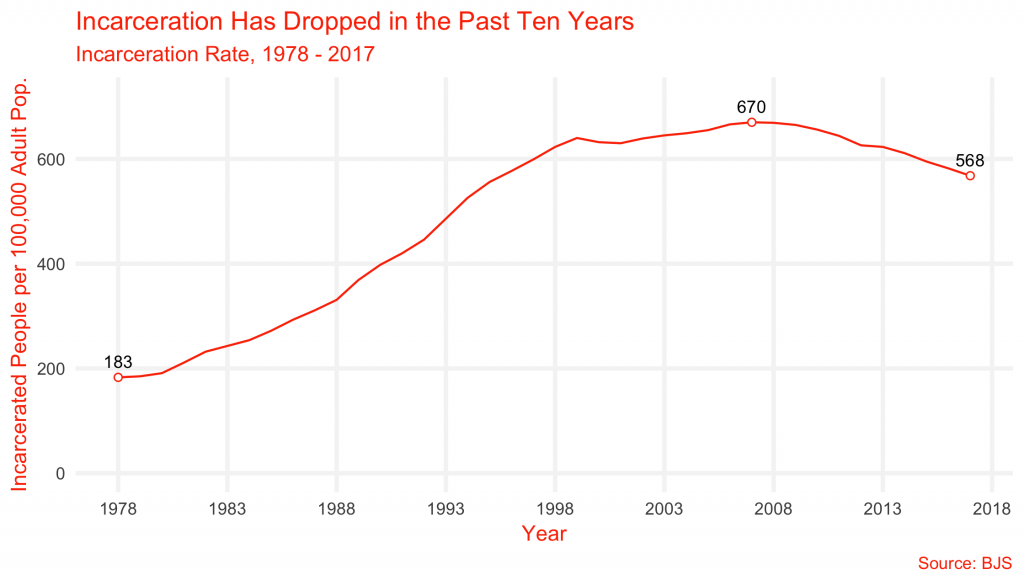 Beginning in the 1970s, the U.S. incarceration rate rose steadily for some three decades. This was in large part in response to the steadily rising crime rates of that same period, which crested in the early 1990s and have fallen more-or-less continuously since then. (The effect that incarceration had in driving this decline is a subject of much academic dispute.)

The report reveals further good news for advocates of prison reform: Much of that decline has been among the black, and to a lesser extent Hispanic, prison populations. Exposure to the criminal justice system can have serious negative effects on a person's life course, and is a major determinant of black men's chances of achieving middle class stability. 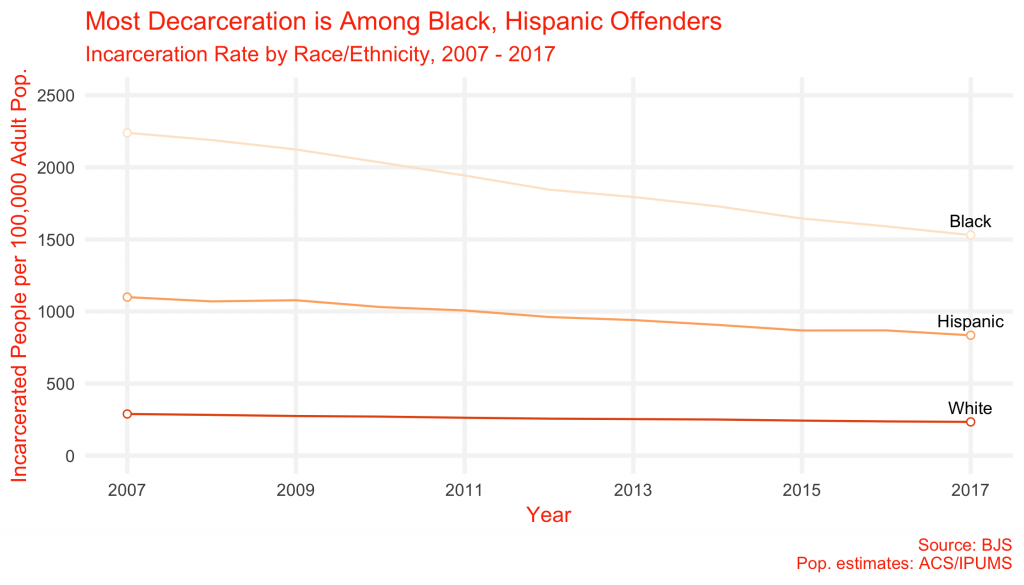 In absolute terms, the gap between the number of black and white inmates has been shrinking. (This phenomenon is itself an artifact of racial disparities in arrest rates, the underlying causes of which are the subject of much debate but almost certainly tied to socioeconomic inequity.) In per capita terms, the black incarceration rate has fallen by nearly 32 percent since 2007, the equivalent of a drop of more than 700 prisoners per 100,000 black adults. The white rate, by contrast, has fallen about 19 percent, a decline of 54 prisoners per 100,000 white adults.

The new BJS report also provides valuable insight on what kind of criminals, exactly, are being imprisoned. Ocasio-Cortez's vivid image notwithstanding, it confirms the long-standing finding that most people in the United States are incarcerated for serious, often violent offenses.

While drug offenses make up about 45 percent of incarcerees in the Federal prison system (which in turn accounts for 12 percent of the nation's prison population), essentially all of these are detained for drug trafficking. At the state level, meanwhile, the majority of offenders are convicted of violent crimes. In fact, the number of drug offenders in state prisons fell between 2007 and 2017, while the number of violent offenders actually rose slightly. 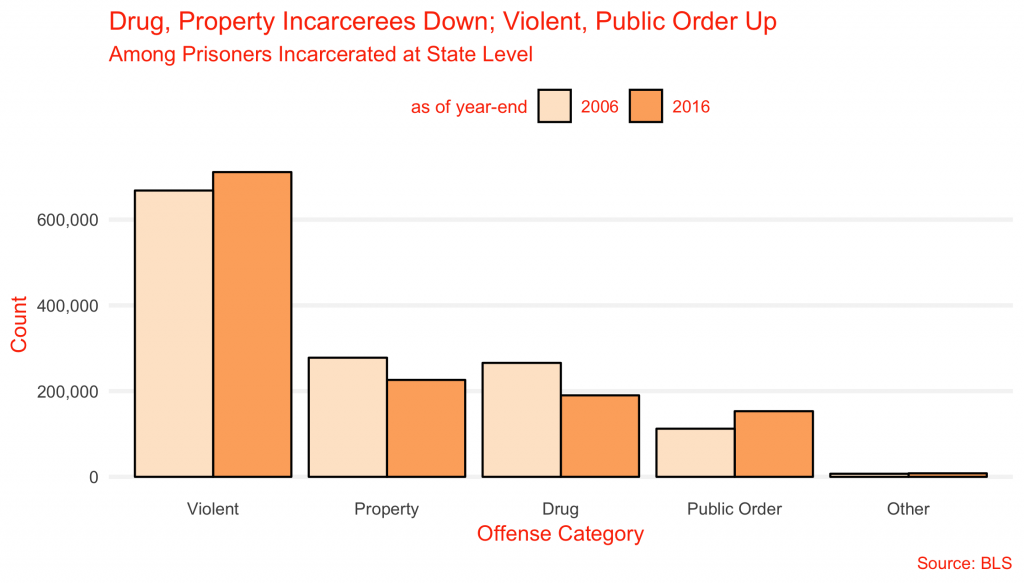 What is more, these figures are almost certainly an undercount of the true number of people incarcerated for violent crime. More than 90 percent of cases end in plea bargains, and otherwise violent criminals frequently plea-down to non-violent offenses. This means, as criminologist John F. Pfaff noted, "the 15% there for possession is an over-estimate and the 20% in for violence is an under-estimate."

All of these indicators raise an obvious question: What, exactly, has caused prisons to empty out? Although the decline represents the coincidence of numerous factors, one major explanation can be identified by looking at which states have decarcerated the most over the past ten years. 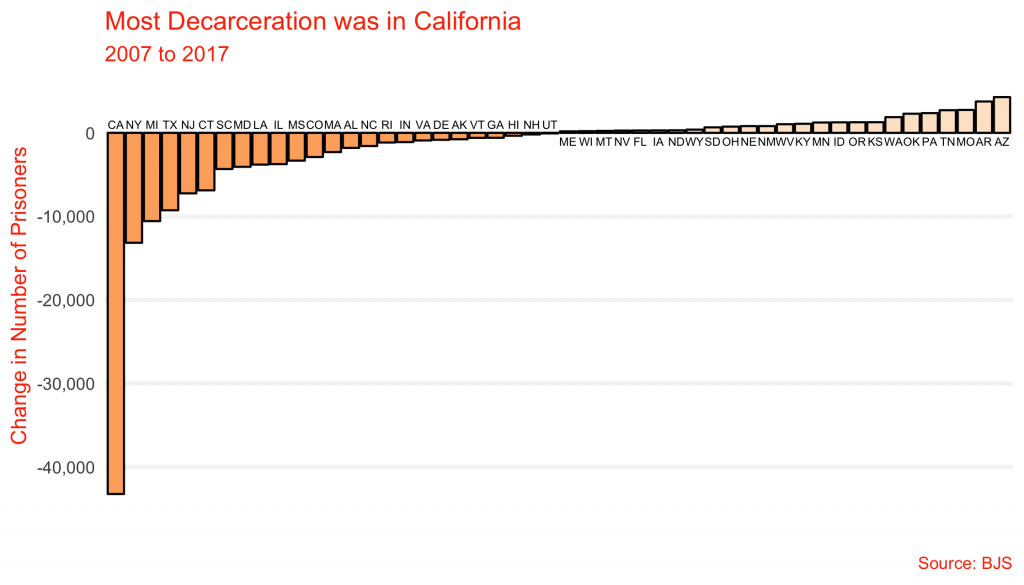 In absolute terms, the biggest driver of decarceration was the state of California. This influence is a product not only of its population size—similarly large Texas and New York saw much smaller drops—but also of policy. Following a federal court order finding that the state's prisons were dangerously overcrowded, in 2011 California implemented a project called Public Safety Realignment. Realignment moved low-level, non-violent offenders out of prisons and into local jails. (The BJS does not provide state-level data on jail populations, but the nationwide convicted jail population fell between 2007 and 2017).

In other words, a single state's major policy shift explains much of the incarceration drop. Still, other states' policies did move the needle—each of New York, Michigan, and Texas net released around 10,000 prisoners between 2007 and 2017.

The total picture the BJS report paints of the U.S. prison system departs substantially from that frequently depicted in the mainstream media. Although still quite large, the prison population has been shrinking for a decade; racial disparities in incarceration are closing; and the lion's share of incarcerees that remain are detained for serious, often violent offenses, not for possessing a dime-bag of marijuana.